From Carrie at Saith Seren - it’s not enough that the council did nothing to try and help keep Saith Seren open, now they want to stop Saith Seren from attracting interest and support by taking some of their colourful flags down!

Please drop them a line to let them know you support the planning application to keep the flags up:

Carrie says: 'We have been asked to submit a planning application to Wrecsam council for our Welsh flags at Saith Seren. Council officers have told us they would prefer to see 2 of the flags taken down and we are hoping to challenge this, (the flags are not currently flying due to recent bad weather). The 4 flags were put up following the campaign to save Saith Seren in May after suggestions from our members to make the building more visible and also to promote our local and national history.

We have now submitted a planning application for 6 flags (we’d like another Draig Goch and Glyndwr banner for the other side of the building) and it would be great to get some letters of support to go in with it which may well make a big difference to the application.

We’ve only heard supportive comments about the flags from members of the public up to now!

Please drop off any letters of support to Saith Seren or e mail the planning department, address here:

@Deborah-SSi - one for the next email?

Please drop off any letters of support to Saith Seren

Oh dear! I’d love to support you, but I cannot in all conscience, because I’ve never been to Wrecsam, so I don’t know what Saith Seren looks like, or the flags!! Could you post pictures? I would think we could then, honestly, ask whatever they have against the flags of Cymru or Glyndwr!!! 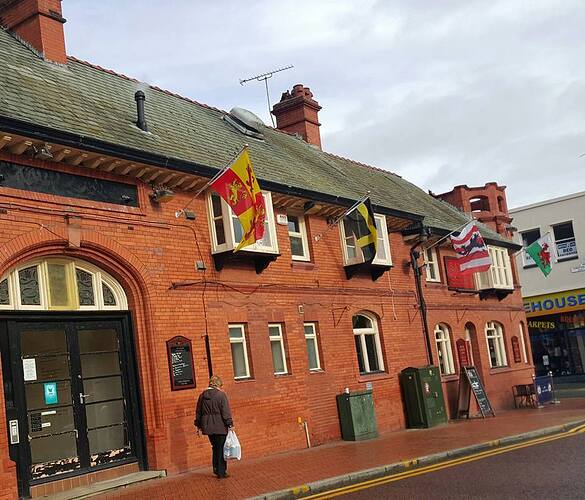 Do you have a planning application reference number (or whatever it’s called)?
(So they can’t ignore letters on petty bureaucratic grounds).
Diolch.

I’m told that they haven’t received their number yet, and that in the meantime, copying 7seren@gmail.com on any submissions would be the best way of making sure that nothing gets ‘lost’…

it’s not enough that the council did nothing to try and help keep Saith Seren open, now they want to stop Saith Seren from attracting interest and support by taking some of their colourful flags down!

I know we like to be polite and helpful on the SSi Forum - but if I could relax the protocol for this one moment and ask what the Welsh is for “council half-wits wasting tax-payers’ money”?

Unfortunately the rules have to apply to everyone. That includes Bryn’s second hand car lot where visually offensive gaudiness might be a key to attracting custom, as well as mild-mannered cultural centres. It’s a pain, but it’s necessary alternative to a free-for-all.

Unfortunately the rules have to apply to everyone.

Mmm… technically true, but one might say that the rules don’t have to be applied to everyone. In other words, there is a huge amount of room for judgement from individual council officers - they do not have to take formal action against everything that can be seen, or they’d drown in paperwork.

In this instance, I’d suggest that the judgement involved has been, at best, extremely poor (and at worst, affected by political motivation).

I don’t care if I’m not Welsh and don’t live in Wales … I’ll think of writing something for sure. I WANT FOR SAITH SEREN TO SERVE ITS PURPOSE THE BEST IT CAN!!! and if flags can help in any way to be hung up then here I am! When’s the deadline for council to decide?

And, besides, they really couldn’t choose better time then festive one to go with this, just as that this couldn’t wait a bit longer …

I don’t know the details of this - and that’s a key thing. I don’t know.

From what I can see though, saith seren is a Grade 2 listed building. Four flags were put up without applying for planning consent[¿apparently?] , and the council have said they would be happy with two, but the planning decision is ongoing.
I sort of see a willingness to compromise here over a listed building rather than a conspiracy against any Welsh flags flying.
I could well be very, very wrong, but do not know the details, which is why I will be keeping away from writing any letters.
But would it be the end of the world if there were only two flags instead of four on a listed building?
I don’t know, as I say. There could well be more to it.
But having somewhere which is able to self sustain itself on trade which happens to be Welsh speaking is more important than having four flags rather than two - and that’s what we should be concentrating on in such things?
As I say though, I know so little of the situation as to be the same as nothing, just that I don’t feel inclined to man the barricades on this one.
Just my penny’s worth.

Just my penny’s worth.

Which might be worth more then penny … What you just said is worthy to ponder thoughts about. I didn’t write the letter yet and seeing the things from your perspective it might be I even won’t write one at all, especially as I’m actually not familiar with your (UK/Welsh or whatever) listing of buildings and what this has to do with hanging flags on that matter, and so, I know about all this even less then you do.

Thank you @owainlurch to alert us (at least me) about this perspective of things. Maybe here’s the time I - living in other country - avoid sticking my nose into something what can be understood totally wrong from my end and this for the letter aimed in wrong direction which could cause a damage rather then do any good.

I don’t actually know the wording of the Listed Building regs, but I thought they were about alterations. A flag isn’t an alteration. A flagpole could be, but if it was just put through an open window, it wouldn’t be!! I can’t see from that excellent picture any good reason for the objection based on the look of the building. Is it worth Saith Seren querying exactly what is being objected to??

I think the point about the additional two flags was that they would be on the other side of the building, i.e. visible from another street, so visible to additional passing traffic / people walking by.

If people are not sure about this because of the listed buildings status, perhaps they could write to the council stating their general support for the Saith Seren project, i.e. helping to keep the language alive, and then asking the council what their specific objections to the flags are.

As @henddraig says, there doesn’t seem much reason to object based on the picture posted, and to me, it all seems very tasteful and in keeping with the building.

If the council has a valid objection, it should be able to say so in simple terms understandable by non-experts in the field of planning.

A flagpole could be

There are four flagpoles in the picture above that aren’t on the building as visible on Google Streetview.
If that’s it, it’s all a bit petty, but I’m hesitant to criticise people for just doing their jobs. Imagine the headlines from the usual suspects if the planning department was seen to be showing ‘favouritism’.

If people are not sure about this because of the listed buildings status, perhaps they could write to the council stating their general support for the Saith Seren project, i.e. helping to keep the language alive, and then asking the council what their specific objections to the flags are.

I actually had something like this in mind. We are supporting the Saith Seren after all but would ponder my thoughts a bit longer on this to write something really suitable and “touching” in the matter. Maybe at midnight when all go to bed I’d have the suitable time for such mindful things.

If the council has a valid objection, it should be able to say so in simple terms understandable by non-experts in the field of planning.

I agree on this.

There are four flagpoles in the picture above

I’d give additional 4 not 2 and put them mirror way so there would be symetry.

There’s a reply on Facebook from someone who says he used to live there. According to him, council officials called round to check when he was changing a broken hanging basket! Again according to him installing anything on the outsides of the building rewuires permission and may require planning permission. If you don’t, it is classed as a criminal offence. So at least some of this is because of the building rather than politics.

But having somewhere which is able to self sustain itself on trade which happens to be Welsh speaking is more important than having four flags rather than two - and that’s what we should be concentrating on in such things?

Yes, it’s extremely important for Saith Seren to sustain itself on trade - and the flags help attract attention and increase trade - and Saith Seren is by no means out of the woods in terms of needing every penny they can get to stay open.

No, it wouldn’t be the ‘end of the world’, but it doesn’t help - and it also fits a wider pattern of Wrecsam Council being negative towards language and identity.

@tatjana, every email will help with the application, and international support for Saith Seren is a particular positive…

I can well believe there is a pattern of Wrexham council being negative towards the Welsh language and identity, but this does not mean that ever single thing has to fit into that pattern. On any issue worth fighting over, you have to make sure right is on your side in that particular instance.
If Saith Seren are still in trouble have they considered moving to cheaper premises?
I remember when I first saw pictures of Saith Seren when it was first being talked about and myself and others down here were struck by the idea talking about it and wishing them well, I thought three things more or less simultaneously on seeing the photos -“wow, that's a lovely building! ","how have they afforded that? That must be a pretty penny" and "with a building like that, I hope they dont run into any problems over planning permission”
A cheaper premises would free funds for the business and a building which is not grade 2 would run into fewer problems such as this - two birds with one stone!
Always good to remember that a church is the people, not a building - I think that principle applies here.
This, of course, may be impossible - I don`t know. Again, just my pennywort.