They seem to include all the ones made/discovered since I retired!f

I got a nice plastic wall-chart periodic table from Poundland. Comes in dead handy sometimes for watching University Challenge. (I think there is at least one spelling error, but what can you expect for a quid?). Would be nice if there was a Welsh version. I have a nice wall-chart map of Wales, which I bought in Wales (not in a pound shop).

Yes, there have been some major changes since my undergraduate days. Semiconductors. the basis of transistors, integrated circuits and microchips (which enable us to communicate by this medium), were made principally of Group IV elements such as Silicon and Germanium with impurities from Group III and Group V of the periodic table. These groups seem to have been renamed to Groups 13, 14 & 15 (not even in Roman numerals!) - is nothing sacred? GRUMP, grump, gr…

I’m very glad to see this table in Welsh even though it’s mostly spelling the English names with Welsh letters. Some languages have more radically different names. eg Oxygen and Nitrogen are Sauerstoff and Stickstoff in German (for good chemical reasons) and Nitrogen in French is Azote.

Can you see, now, why I’m in such demand at parties?

Was never much of a chemist, but I remember exotic sounding phrases/names (for groupings) such as “Lanthanides” and “Rare Earths”.

I was (slightly) more at home in physics, and in 6th form Physics (which was held in the Physics lab), there was a very wide wall chart of the electromagnetic spectrum on top of the wide greenboard which I used to enjoy looking at during lessons (when I should probably have been listening rather more carefully).

That’s ffantastig. This is definitely calling for a fridge magnet to be made… 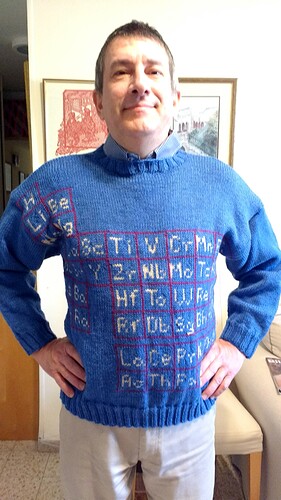 Maybe the more chemically-minded people on the Forum would be interested in the periodic table pullover designed and knitted by my wife Avital, and seen here with me inside it this morning.

I’ve seen it (in English) as a shower-curtain.

even though it’s mostly spelling the English names with Welsh letters.

Very few, if any of the elements have English names or were first coined in English - the majority of the most recent are neo-greek and the older ones are generally latin or greek.

Oxygen coined by Lavoisier - meaning acid producer and nitrogen by another Frenchman, even though the French and many others prefer azote.

We are lucky oxygen didn’t get named phlogistonstuff in English!!
To @mikeellwood At least you learned that the sentence:- “Radiation is dangerous.” is a terrible and inaccurate generalisation and would never have picked it as a duolingo example! Even with “ionising radiation” it depends on what sort and how much! I got them to change it to “Radiation can be dangerous!” which has the benefit of being true! They even added another sentence, “An x-ray may be useful.”!!

I don’t know what people say for tin and lead in Welsh these days, but the older Welsh words plwm and ystaen are more like the Pb for latin Plumbum and Sn for Stagnum than the English. I imagine many of these older words are very ancient and hard to say who came up with them. We certainly had gold (Au), Arian (Ag), copr (Cu) lead (Pb) and tin (Sn) long before Roman times.

The gases were relatively recent, discovered and named by the aristocratic gentrified scientists who loved Greek.

Indeed. Anything found/discovered/made before the Romans arrived in Britain may have an indigenous name, unless trading caused usage of middle eastern words. Much nomenclature arrived with the Romans, After that…

Also, that would include words for lime and chalk Welsh Calch, Latin Calcum and the origin of the name for Calcium, because chalk is Calcium carbonate.

I imagine trade from the bronze age or before would have helped create equivalents for some of these things in many languages.

Very few, if any of the elements have English names

I’m sorry, but all the element names in the periodic table I studied have English names. The fact that Hydrogen, Oxygen and many others have Latin or Greek roots and others are named after people or places makes them no less English.

) approach by referring to the physical/chemical properties of the elements. As a Welsh physicist, I am glad they took this sensible approach to add to our considerable Welsh scientific lexicon…

I suppose the “mother” language of the periodic table should be Mendeleev’s Russian.

Edit: I’ve just spotted your interesting addendum on Calch etc which links to my competition below.

Competition (with no prize): Produce a Welsh word for an element based on its physical properties or associations. My entry would be “Crewrdwr” for hydrogen which follows Lavoisier’s naming it (in French) as the creator of water. Answers on a postcard to …

Maybe the more chemically-minded people on the Forum would be interested in the periodic table pullover designed and knitted by my wife Avital, and seen here with me inside it this morning.

Wow! Kudos to your wife! Is she (and/or are you) a chemist or other scientist to whom the periodic table is directly relevant?

(Of course, it’s relevant to us all, whether we are scientists or not, and whether we know it, or not).

I echo @mikeellwood 's comments and compliments to your wife, @Baruch
Even though, the Periodic Table has evolved and changed since Tom Lehrer’s time, you, she and everyone might enjoy Lehrer’s Table of the Elements (with a nod to Sullivan for the music).

well you’re right - they’ve been adopted into English and so are now part of English vocabulary - most languages have adopted them, with a few exceptions and variations, so in my mind they are words that are as English as they are French, Italian, Spanish or hindi.