So, we went through Day 1 today of our first 10 day intensive today - and it’s already clear that the results are going to be absolutely fascinating.

We’ve got 4 hugely brave souls putting themselves through the mincer - Natalia, Louise, Wendy and Richard - and they’ve worked their socks off today, and already had some very important victories.

And the end of an exhausting ‘in at the deep end’ first day, although they’re clearly very tired, they also seemed pretty positive about what they’d already achieved - and perhaps not too far off testing out the local pub - I’m looking forward to seeing how bright and cheerful they are tomorrow morning…

It’s lovely to have Dee’s company, as well - Dee is observing the first week, ahead of leading a 5 day ‘brain shock’ intensive near Llandysul in November. From what I’ve seen so far, I think she’s going to be a particularly brilliant course leader - she has such deep and careful understanding of what learners are going through when they work as hard as this.

My thoughts and vicarious excitement are with you, the intrepid participants and Dee. I think the Magnificent Seven should cede our title to the “Fantastic Four”.
Pob lwc i chi gyd.

Reading @sharonmonks 's post reminds me that there are other claimants to the title, namely those who underwent the shorter intensive courses. I can confirm that Sharon did survive, apparently unscathed. 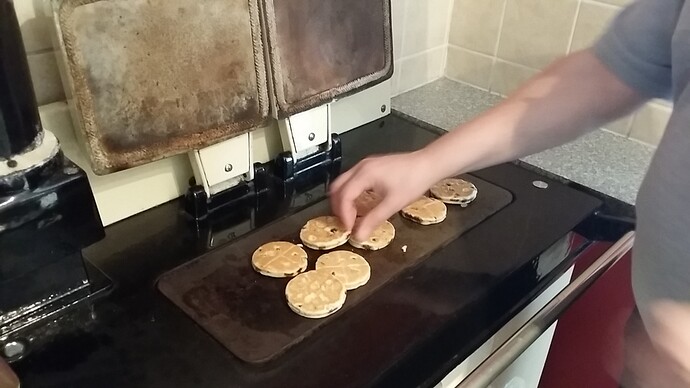 I am in great admiration of them. After 10 days…? I just want to see what happens to them… are you going into full immersion part-way through? (For example, after day 5?) Just wondering.

That’s sort of the plan, but we’ve got a split - not everyone’s ready for full immersion - so I think we’re going to need to do a sort of half-and-half kind of set up…

Well, time for us to break some new ground…

It’s been an impressive yet familiar 5 days so far… brutally hard work, huge determination, and results ranging from the eye-wateringly good to the impressively determined…

Tomorrow, I’m going to carry on doing some extra one-on-one work with Richard, and I think everyone would benefit from one more full day of lessons - but then we’re going to do some more social stuff in the evening, and on Saturday I think we’ll be into reducing lesson time and increasing listening and speaking time for at least two of the group…

I’m rather kicking myself that we didn’t get someone to come in and shoot some videos this afternoon, as a comparison with usual 5 dayers and as an internal comparison for the 10 day process… but after seeing how this is going, I’d be surprised if we didn’t have other opportunities in the future…

I almost dread to ask, but what percentage survived?

Could any of them use any language afterwards or had their brains liquefied?

Assuming the first answer was 100% and that the second was either ‘Yes’ or ‘They forgot all languages except Cymraeg’ what were the results like?

I almost dread to ask, but what percentage survived?

Well, okay, unless still being actually alive counts as ‘survived’…

But we lost Wendy half way through because of a trapped nerve, very sadly indeed, because she was really getting there…

That left 3… of whom Richard was having to deal with some heavy duty extra challenges, like a very weak working memory and some possible issues with indexing and transfering working memory to short term memory… he worked like a Trojan and remained cheerful and positive throughout, despite having to watch the others have a much faster experience… and he made some real, genuine improvements, which he and I think have left us with a clear road map for him in the coming months…

Oh, and Natalia and Louise? They’re Welsh speakers now. Wait until you see the video…

Apart from the injury, that is brilliant news. Congratulations to you, Dee and the participants. I am looking forward to the video.

On a side note, I have a friend who has just been diagnosed with Alzheimer’s. Doctor’s advice… learn a language. He is now soldiering away at learning Welsh.

Ouch - that’s horrible news - I wish him all the very best. I suspect the doctor may well be right that in terms of cortical workouts, there’s not much more challenging than language acquisition… really hope it helps…

After ten days. That is impressive and intense!

After ten days. That is impressive and intense!

Where is the video?

Met up with Natalia at the Monday evening group in the local Dyfi Tafarn in Glantwymyn. We had to keep asking her to slow down, so we could keep up!

Oh, she was so fond of those…