What is the best to learn? I spend a lot of time in and around the Welshpool Newtown Powys area, I’ve spoken one or two words I’ve learnt from the northern version but no one seems to understand me! Would I be better off to learn the southern version? Thanks, John.

You are probably quite near to what I experience in Aberystwyth (i.e you’re quite close to that invisible language border between North and South)

Powys may be a bit of an anomaly depending on where you’re talking about. It’s a giant county that goes right up to the North and can get to about 30 miles from Cardiff in the South, so you will always find a lot of variance in Powys.

Having said that, I don’t know whether its happened to me since moving to Aber, but I don’t find the differences between South and North Walian as being tremendously big anymore. With, I have, Key, Children and a couple other words are about the biggest differences arent they?

TBH, I don’t really notice most of the differences. I learned southern Welsh but live with a northerner, in a city where there’s just about every accent/dialect going (Cardiff). I think it’s a big thing when you’re first learning, but after a while it becomes less & less important. Just as someone in the north of England describing a ‘bank’ confused me for a while but once I realised they meant what I would call a ‘hill’ we were good.

When I moved to Wales, I just asked my neighbours what they say for ‘He is…’. They said ‘Mae o’n…’, so I did the Northern lessons. lf they’d said ‘Mae e’n…’ I’d have gone for the Southern version!

As it turns out, most of my Welsh lessons have been in Aberystwyth, so South/West Wales Welsh, and it really isn’t a big problem. I live near Machynlleth and that’s mostly northern, but it’s a real mix - some people from south Wales live here!

Just as someone in the north of England describing a ‘bank’ confused me for a while but once I realised they meant what I would call a ‘hill’ we were good.

And the only time I’d heard “yonder” or “yon” outside of poetry was when I went up to Cumbria in summer holidays as a child. There were some other vocabulary differences as well, some that I remember, but most that I’ve probably forgotten. But the most striking thing about English regional speech is the range of accents, and the way words are put together, sometimes making phrases that you just wouldn’t come up with in your own regional speech. I’m guessing it’s similar in Welsh.

The important thing is to learn Welsh. Then, when you start to talk with people you will adopt they way they speak. North v south is in reality only a dialect difference.
If you were learning another language from another country you would not learn the language spoken in the N S E W but the basic language and then adapt it to suit the area where you end up living/working.
People who learn English do not learn the differences in the way that English is spoken in say Cornwall, Newcastle, Glasgow, they just learn English.

I repeat, the important thing is to learn Welsh and don’t worry about regional differences at this stage.

Just as someone in the north of England describing a ‘bank’ confused me for a while but once I realised they meant what I would call a ‘hill’ we were good.

Yes, to me it is a road or settlement etc situated on an incline climbing up from a river or stream, usually in rolling landscape; rather than the river bank, itself. Bank foot is somewhere towards the bottom of the slope.

Does anyone know if this is also the meaning in Carmarthenshire? I’m thinking of places like Dan y banc, Banc y felin, etc. None of which are immediately adjacent to a river.

Does anyone know if this is also the meaning in Carmarthenshire? I’m thinking of places like Dan y banc, Banc y felin, etc. None of which are immediately adjacent to a river.

yes, more than likely. banc can be a mound or hillock, so if the terrain has any biggish bumps these names would certainly make sense.

OK, in the case of the NE of England, I’m thinking of more than a hillock. Usually a major incline towards a watershed. Newcastle (like Cardiff) was built over ancient streams (each with their own mini-valley). Where I lived, is a stream (burn) called Denton Burn. The main road leading up from there to the watershed before the next stream is Denton Bank.

banc could work, but there are sooooo many words in Welsh for hills and other ‘lumpy bits’ that banc may not be the word used. When it comes to the bank of a river or lake (or, poetically, the sea - as in Ar Lan Y Môr) though, it would generally be glan rather than banc.

Thanks for all the information I think I’ll carry on with the northern Welsh but as one person says Welsh is Welsh! I never really thought about that! Thanks again John.

Hoping ok to carry on here rather than starting an Again, again topic

So, North or South or both?
Just thinking of the N and/or S for UP: I fynny and Lan

Great to see I fynny (Up) on Y Wenhwyseg (Gwentian) page today. Well, actually I Fynnydd. So that sort of suggests it can be used in the South as well as the North? I appreciate that Y Wenhwyseg is a study on the old dialect of the SE.

Also, In Bangor, N Wales, the young lady I spoke to used “lan y lon” for “up the lane”. I don’t think she was specially speaking Southernish to help me, although I did use the Southern Ble in my question.

So is it ok to just mix these (I fynny and lan) regardless of location?

So is it ok to just mix these (I fynny and lan) regardless of location?

Well, you’ll always be understood, of course - I think they’re fairly strong north/south markers, so that ‘lan y lon’ might well have been a response to your ‘Ble’ 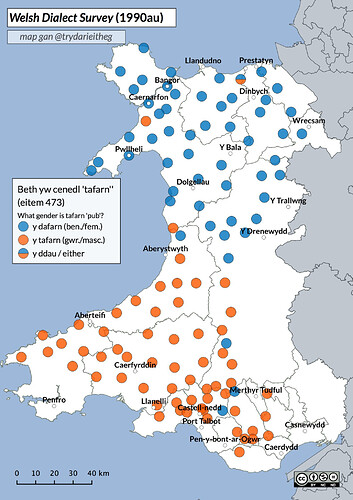 Interesting. I also liked the map of the “o” sound in goll. Although I live on the S coast of Wales, I find that the remnants of my one-time North Eastern English accent sneak out in words like Goll, Fron, Beth, etc.

It is only a difference in dialect. You don’t worry about differences in English between say Cornwall and Northumberland. Just use what is natural and if you move to a different area adopt the words used there.

I suspect that during the industrial revolution a lot of people would have moved between North and South. The original population of the Rhondda was only about 8000 in the early 18th century and I’ve read that the local dialect was almost like an other language and for the Welsh language to still be the overwhelmingly dominant language in 1850 suggests a lot of migration within Wales. If it had been predominantly into Wales then the language would have long disappeared by this time. So maybe there was a melting pot of dialects, some maybe dissappearing and others forming etc?

Another interesting map here, although more West/East rather than North/South differences - it shows for each district the proportion of people born in Wales who speak Welsh according to the 2011 census (courtesy https://twitter.com/mappingcymru who also provide this link to the original map where you can click on each district to see both the overall proportion speaking Welsh and the proportion of those born in Wales speaking Welsh:
https://fusiontables.googleusercontent.com/embedviz?q=select+col0%3E%3E1+from+1p2cQJzK-0MzvUO6sXtNjytPwLxF0lHRtceRfM3sO&viz=MAP&h=false&lat=52.73782428593626&lng=-2.9679409294125207&t=1&z=8&l=col0%3E%3E1&y=2&tmplt=2&hml=KML) : 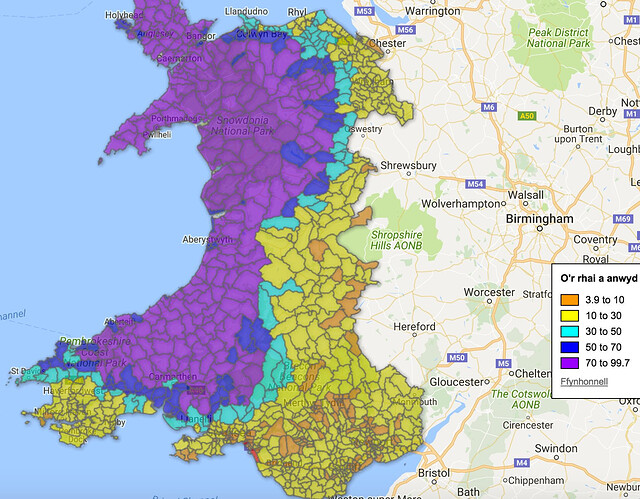 Yes, sorry - I was mainly observing accent rather than dialect words. The short Northern O and the more open longer Southern one. I’ve been corrected a few times for not pronouncing the place, Frongoch as Frôngôch. Then I made a phone call to Bangor and the person said "Where?? Ah you mean Frongoch.

How do I check that I am doing North Welsh rather than South? Thank you