Hello, I’m after some brave volunteers to try out a test SSi mobile app for listening to Welsh lessons. It’s very similar to the new Spanish app (beta available here Spanish apps beta release), but because we don’t have sufficient Spanish learners at the moment, it’s not had as many user testers as I’d like.

Here are the key facts

What I need from testers

How this helps us

How to get involved

For help on sending a private message, and other useful things, check out this Tatjana post

This forum - How to ... & similar things General / Questions

Ahhh, those are tinny BEAUTIFUL bits. Here are more, but first something else I bear in mind might cause some uncertanty and confusion so let's clear this first. Well, here's a picture of what I actually meant: [image] So that no one would mistakengly think something else than that. It goes STRICTLY to the counters of posts and not the visibility of them. Now to the tinny shinny things I like. Look how @aran's (and everyones else for that matter) appearance shines when clicking on…

Diolchs
Thanks to everyone who has helped with testing the existing Welsh app, and the new Spanish app.

HAHA! Is that pointed out especially for me. - LOL

I’m brave enough to go into half Klingon - half Spanish thingy but I can’t test purchase part of it as I’ m already paying member and have access to everything (umm … well … Cymraeg content regarding (that there won’t be any missunderstandings though)), however if this is not in connection with existing app then I can do that too. And, for the SSi I’m using my google mail.

For the green matter ---- I will have to face this enemy once anyway so this is the right time to do so. - HAHA!

Oh, and, does it help I’m already member of your testing group or you need my email sent to you anyway?

There is no member sign in using the test app. This means that it is completely separate from your SSi subscription. This allows us to test that purchases made with Google Play work reliably.

I have your email already, so I’ll go ahead and set you up with test access

Sorry for the greenness - I forgot you weren’t a fan!

I forgot you weren’t a fan!

No, the matter is greeny isn’t a fan of me … but I already told that story once upon a time here …

Now to some isues (yah, yah, I always find them …

I’ve tried to download “Test Course 1” “Lesson 1x” ummm … well … out of my curiousity what it is. I test-payed for it successufly and tried to downolad it but it didn’t download despite it showed as if it’s downloading. Then after 2 or 3 stops of download and restarts it again it showed me an error.

I thought it mihgt be because of kind of Test course which maybe even don’t exist so I did the same today with Level 1 Listening Practice 1 North. It was shown that the Challenge is downloading but there was no actual sign it really does. I went elswhere on the phone to do something else and when comming back to the app through “apps running” tab, the app crashed. The crash happened twice and at second crash I’ve sent you an e-mail.

(this is the first crash though)

As you’ll see in the background, the lesson shows it’s still downloading but if you look at the icons at the top of the screen there’s no icon to show download is really happening.

I tried to download lesson through WiFi but it didn’t and then I switched to download it from whatever network - WiFi or mobile and it also didn’t happen.

Now I’m home where I have much better WiFi connection and tried to download via WiFi once again but the same error like with Test Course was shown.

If you’ll notice on the screenshot no matter I’ve pressed Listening Practice 1 to be downloaded it writed “Challenge 5” at the top of the screen what could lead me to the conclusion that the path direct app to the wrong direction or something like this.

Every time I access already runned app through “apps running” button (app is still running) it crashes but not closes.

Well, and one more thing: This time I’m on Android tablet and not on the phone.

This is for now as I believe I can’t download anything at the moment so there was no actual listening yet. At the moment I am on downloading lesson 25 of Course 1 South to see if this goes and i’ll report back later on what happened.

So much for now. As usually, if you can’t understand my strange expressions, let me know …

Ah, and something more: You’ll maybe remember that this Crashing isue was in place with SSiS app aswell so you might pull out something from its logs (if you stil keep them of course).

EDIT
I’ve managed to download Lesson 25 of Challenge 1 and managed to start listening (will listen through the whole Lesson later on though) and it all seams fine at least here. So something is working right though.

Well at least part of it works! Thanks for the feedback so far. It’s very useful.

You’re right, test course 1 is just a test course, so it’s best to ignore it.

Everything else should download okay, so if you come across any other files that don’t download, please let me know.

When you receive an error navigating back to the app via the running apps button, is it always the lesson list page that you had open? Or does it happen on the lesson playback page as well?

Thank you very much for your feedback with this, Tatjana

I had much the same experience as Tatjana. I was able to test pay for the course and download and listen to lesson 2x of Test Course 1, however, I have not been able to download any of the other lessons so far.

If you need more details, I’d be happy to post them here or e-mail them to you separately (i.e. error codes, etc.).

For now only course list, but I’ll run some more tests and report back. The Lesson 25 of Course 1 played well and entirely.

Thank you very much for your feedback with this, Tatjana

You’re welcome Aran. I was on the bus when posting previous post and we almost arrived the destination when I had to go off so I just posted the “urgent” bit of feedback so that @theblacksparrow can have kind of direction of issues.

It should download via mobile internet (if you’ve enabled the option).

If you need more details, I’d be happy to post them here or e-mail them to you separately (i.e. error codes, etc.).

Thanks for the feedback!

I think I know what the issue is, so hopefully I’ll have fixed the downloads soon

It should download via mobile internet (if you’ve enabled the option).

On tablet I only have endless mobile internet so it’s switched on all the time (never switched off at all) but it still doesn’t download. I’ll go and download via WiFi now to see if it downloads at all.

EDIT:
It downloads via mobile transfer now so it appears everything is good for that matter.

Just use whatever device you’d normally use for your Welsh lessons.

All testers (so that’s @tatjana and @jasoncrow) could you uninstall and reinstall the test app please. 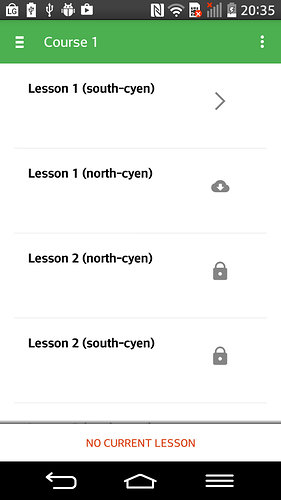 Sorry about that, but the app’s not fully set up to support different regions yet.

Level 1 and Course 1 seem to download okay. We’re working on fixing the download issue for the other courses

All testers (so that’s @tatjana and @jasoncrow) could you uninstall and reinstall the test app please.

Will a bit later tonight.

No problem. Will do.

Great work, testers, and great work, James - diolch o galon to you all