If you missed it first time round good news…

Sunday 22:00 Y Gwyll
Another chance to see the BAFTA Cymru award-winning drama series starring Richard Harrington, Mali Harries, Alex Harries and Hannah Daniel. On his very first day in his new job in Aberystwyth, DCI Tom Mathias is called out to investigate a suspicious disappearance. In a quiet seaside bungalow he discovers a bathroom covered in blood but no sign of the owner. There will be a special new episode of Y Gwyll on S4C on New Year’s Day.

New to Hinterland? Learn all you need to know ahead of S4C's rerun this weekend

And I still haven’t watched the first series… I intended to continue Buffy rewatch during Christmas but maybe I start with this.

The highlight of New Years Day for me!

The highlight of New Years Day for me!

Same - I like my detective fiction, and it’s interesting seeing places I actually know reasonably well on the TV (well, the PC monitor - I don’t watch much TV these days).

Article and trailer for the new series starting, September 13th.

I can’t wait! I wonder how long it will take until we will be able to see it in the US…

I watched the US Netflix version of the first series this summer, and was disappointed that there was NO Welsh other than people/place names. Except for one time, when Mared reads the writing on a picture that is hanging on a wall; the quote is in Welsh. I checked to see what the subtitles were for that bit, but unbelievably they said “Speaking German”!

I purchased the Welsh language DVDs but I can’t understand anything without subtitles. When I put the English subtitles on, suddenly I can start picking out some Welsh words. Funny how that works! I’ve put them aside for now until I have more SSiW lessons under my belt

When I put the English subtitles on, suddenly I can start picking out some Welsh words.

I am horrendously lazy and hate missing points, especially in drama, so I always use English subtitles!! I love noticing when they are wrong and working out how it happened!! Of course, it doesn’t improve my Cymraeg one bit!!! 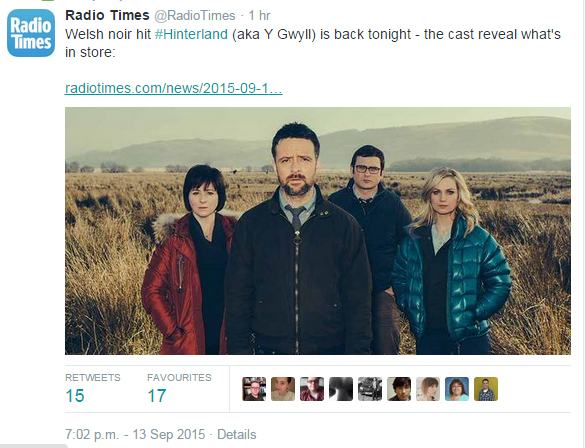 Your UK TV and radio guide to what's on TV and on demand plus all the latest entertainment, soap, film and drama news and reviews from Radio Times.

SO wishing I could watch this tonight, too! I enjoyed watching that trailer/interview link, though - thanks for posting that. I’m looking forward to learning more about the lives of the characters.

I think I’m going to go pull out my DVDs of the first series and have some Welsh immersion. Maybe I’ll understand a bit more than the last time I tried. Just call it solidarity with the rest of you.

Anyone want to have a discussion thread on this, with spoiler alerts?
(Storyline, characters, any particular language things we notice, etc).

I think we did this when the first series came out.

A bit hard on those who are geographically excluded, admittedly.

I’m a bit more relaxed about this series - might even be able to watch some of it - because my mother has moved away from Borth to live near my brother.

The first time round, I was quietly confident that she’d turn out to be the murderer…

Anyone want to have a discussion thread on this, with spoiler alerts?

I hate trailers, chats about things I haven’t seem etc., especially mysteries, detective stories etc!! I have a friend who always watches the end first in case someone nice gets killed, as she hates nasty surprises!! I used to write Star Trek stories and hated it when folk read the last page first!! (All my efforts to work up to the crescendo, all for nothing!!!)
So far, all I can say is that I really don’t like his wife!! What part of “I’m on a case” does she not understand?
To @aran re- your Mam, Why?

I’m going to have to leave that to your imagination. I don’t want to give the police any clues.

I don’t want to give the police any clues.

I don’t laugh out loud very often, but I am now!!!

I only wish I could post any reply at all, but as I live in Germany, I cannot access any of S4C’s programmes, including Dal Ati which seem strange, as Dal Ati is supposed to be for learners of Welsh. Unless, of course, I have missed something. Roger

@rogerspencer There are some S4C programs available internationally. The website is here:

They are supposed to be adding more content in the future. I am in the US and these work for me. Except, at the moment, a few of the programs in the list are actually only available in the UK. I have emailed them to ask about this, and they replied today that they are looking into it. I hope they make international access available instead of removing them from the list!

Edited to fix the link, I hope. I don’t know why I have so much trouble trying to insert links!

they replied today that they are looking into it.

Or internationally actually means US and UK …

Thanks, @tatjana, I fixed the link. My fault, I should have checked that it was correct when I posted it. Sorry for any confusion!

I’m getting the same FLASH:srcnotfound error that I got a while ago, right after they updated the site. The information for those shows says “UK Only” instead of “Worldwide”.