At my work place in Jerusalem they were offering an introductory course in Arabic for anyone interested, and I signed up. We had our first introductory lesson last week, and it was surprising how similar are the learning skills needed for Welsh and Arabic. No, the languages themselves are totally and utterly different. One Celtic, one Semitic. No connection that I know of. But some aspects are common to both. They include regional variations, substantial but predictable vowel variations, and huge differences between spoken and formal language. This threw off some of my coworkers. I had no problem! Been there, done it. So I guess that SSiW is helping to build learning tools by teaching recognition of characteristics that are common to more than one group of languages. Diddorol.

I wonder if other members of the Forum have noticed language-building skills that are universal, or at least not limited to one group of languages?

By the way, the lessons are being taught by a native Arabic-speaker using the Ulpan/Wlpan method that will be familiar to some readers here.

May I ask you: are you a Hebrew speaker? I presume so.
To what extent, if any, are Hebrew and Arabic mutually understandable?

I know there are some similarities, the one that many people will know being “shalom” vs “salaam”.

But maybe they are not really all that similar at all, especially the script. (I did try to learn Hebrew script many years ago - this in a biblical Hebrew context, rather than modern Hebrew). I found it interesting, but challenging, and eventually fell by the wayside).

To try to offer an answer to your question, the only one I can can up with, and that is thanks to SSiW is to listen, listen, listen.

In my very brief, 3 week, experience of learning Japanese, I’ve come to the conclusion that once you’ve learned one language primarily aurally and orally then learning the next language in the same(ish) way is, while not a piece of cake, not as hard as I expected. I don’t yet see any similarities between Japanese and Welsh or English though.

Hi Baruch,
Good on you for learning Arabic.
Your observations go right to the heart of the definition of language, I think. Pretty well all languages have the regional variations that you describe, and uniformity is often imposed by a central government and/or education system. Here is an example I saw earlier today on my way to a meeting in Narrabri in New South Wales: 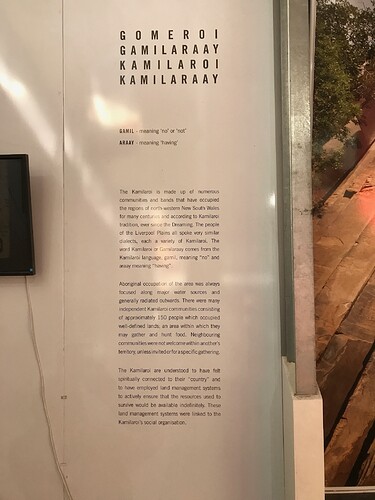 Yes, I speak Hebrew fluently enough. Hebrew and Arabic, though part of the same language “group”, are not mutually understandable. However, there are concepts common to both languages. I have only had one introductory lesson in Arabic so far, so I am not yet in a position to know much about the subject. However, I would think that a possible comparison would be between, say, English and German. Many equivalent words (e.g. morgen/morning) that become obvious only after you’ve learned them, but that make it easier to remember. Your example of shalom/salaam is a good one. Plus many structural similarities that I will have to learn as I go along. As for the script - we’re learning it in Hebrew transliteration, as the teacher wants us to learn how to speak the colloquial language. So the script will have to wait. Hwyl fawr!

When I first moved to Israel, I met a guy from Western Europe. His mum was from one country (France, or wherever), his dad from another, and he grew up in a third. He had three mother tongues from the start. He knew many European languages when I met him, in his early 20s, and he was leaning Arabic. By the way, we conversed in Hebrew. I always remember him telling me that after 2 or 3 languages, the brain starts to adjust to make it much easier to learn others.

Correct. I have read so many times how regional English in my native England has been largely lost to ‘standard’ English.

Incidentally, I wonder how valid is the ‘North’ v ‘South’ Welsh dichotomy? Are there really two major regional dialects, or is it simply more convenient to take the whole range of variations and impose these two labels on them? Any native Welsh speakers out there able to comment on this?

The other way around, my experience of Russian and Serbocroat, with the importance of learning case patterns, prepositions etc has helped me with Cymraeg.

as the teacher wants us to learn how to speak the colloquial language. So the script will have to wait.

Incidentally, I wonder how valid is the ‘North’ v ‘South’ Welsh dichotomy? Are there really two major regional dialects, or is it simply more convenient to take the whole range of variations and impose these two labels on them? Any native Welsh speakers out there able to comment on this?

You are right to be suspicious. There is no such thing as “A North” or “A South” dialect. In fact, Welsh speakers (mostly) joke that if there is a stream running through a village, there will be a different accent / dialect on wither side of the stream.

The movements of people and the advent of Welsh language radio and TV has gone some way towards bringing the dialects together and standardising, or at least mixing, the various dialects, but there are still way more than two accents / dialects in Wales. So for instance, north Pembrokeshire / South Ceredigion is very noticeably different to western Carmarthenshire, and going east of carmartehn, you’ll encounter at least 4 very distinct accents in the fist 40 km or so of travel - Dyffryn Llyw, Dyffryn Aman and Cwm Tawe accents are quite distinctive, and totally unlike Carmarthen…

I have read so many times how regional English in my native England has been largely lost to ‘standard’ English.

Yeah, I’m not sure if that’s quite as true as we’d (dis)like to believe. I know stories of people around 1900 being able to place someone to the correct village in the Black Country (say, 4 miles apart) by their accent/dialect, and I think we all believe that it belongs back then, with Shaw and Sweet and Pygmalion. But a while ago – OK, about 20 years now, but not 120 – I remember a friend of mine from Lancashire, who said he’d worked in an office with four young women who came from different parts of Wigan. Now, to me, as an unrepentant southerner, I’m sure he and they would all have just sounded ‘northern’, and certainly to him the four ‘girls’ just all had Wigan accents; but they insisted to him, and tried to demonstrate, that they each actually had different accents, and swore blind that they could tell which part of the city each was from, just by her accent.

In fact, Welsh speakers (mostly) joke that if there is a stream running through a village, there will be a different accent / dialect on wither side of the stream.

In the village in France where my parents live some of the older people still spoke Occitan until recently. One of them told me that there were recognisable differences between the speech in the village and that in the town only 2km away. The only example I remember was the word for ‘chair’/‘cadair’ – written cadièra in the normalized form, and pronounced pretty much as spelt, apart from the final ‘a’ being more like a Welsh ‘o’: neither the village nor the town pronounced the ‘r’ as an ‘r’ – one made it into a ‘y’/‘i’ and the other into a ‘d’, though I can’t remember which was which. (And no, cadièra for cadair isn’t just coincidence.)

Certainly when I grew up in the Rhymney Valley (80s / eraly 90s) you could still tell the difference between valleys, and between north and south in those valleys. I think the intervalley differences have been eroded away now, except amongst older people maybe. There’s still quite a difference between north and south in any valley, but that’s more to do with Cardiff and Newport expanding into the south of the valleys.

I used to work in Merthyr and one of the women I worked with could guess where a patient was from to within a few miles (i.e. Blackwood vs Bargoed, Abercynnon vs Merthyr Vale). I was really suspicious at first, but after about a month of her being so accurate with about 90% of the new patients I was sold.

Very interesting post. I have been learning Arabic for a few months, concentrating on the Egyptian dialect and I really recognise what you are saying. There are in fact a few parallels in the sound system e.g. the aspiration with the خ (KH) versus unaspirated ك (k) and ح (H) compared to ه (h) reminds me of the Welsh r and rh and c and ch patterns. Certainly, having learnt some Welsh has helped me with hearing and producing sounds which have that ‘breathy’ quality. I also think that the SSiW approach teaches some great strategies for dealing with unfamiliar sounds and patterns through lots of structured repetition with real conversational language. I think that the SSi approach would work really well with Arabic, especially the varieties which are mainly collloquial such as Egyptian. It would be great to swap some more notes on your Arabic learning experiences

When I was living in Liverpool, I used to have brief but interesting conversations with a Jordanian, with me speaking Welsh and him speaking Arabic. The non Welsh- or Arabic-speakers would be amazed at the similarities between the languages, and how much we could apparently understand each other.

We on the other hand, would talk the most amazing drivel, because, of course, neither of us could understand a word the other was saying…

Do you have the same experience when you talk to @aran?

Not at all, @hewrop - I understand a tiny bit of Arabic.

In fact Semitic and Celtic do share some characteristics that are not found in other IE families - the ‘conjugated’ prepositions, and the genitive canol y dre construction.

Some linguists think Semitic and IE are related way way way back, in the same way as IE and Uralic.

Never noticed that before - good point.