Story on the Welsh language in the news

An interesting small piece in this weeks newspaper, an encouraging sign if the desire for a Welsh medium education is being driven at a community level. 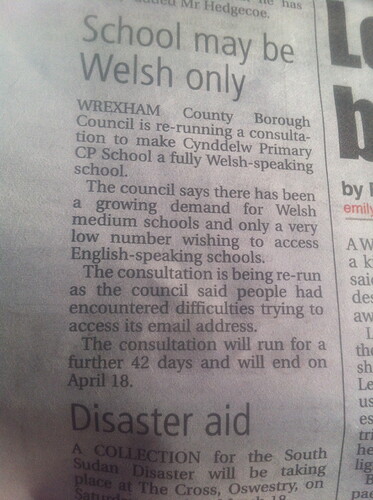 That’s not the same story.

Interesting that in one area there’s a proposal to increase welsh-medium provision, and in another to decrease it (and decrease ease of access)

Many thanks for that, and in looks like financial pressure of councils is further increasing in coming years. Well, still a positive to be drawn from the original newspaper piece of the school in the Ceiriog Valley then!

Can anyone tell me the letters “CP” stand for in “Cynddelw Primary CP School”?

If this were England, I would guess it was “County Primary”, since most provincial primary schools tend to be run by County Councils.

But the local government setup in Wales is a bit different to England’s, I think, and also, a County Borough is not the same entity as a county.

Well there’s nothing on Wrexham council’s “Glossary of Educational Terminology” (although I did spot the Ar stands for Art, if ever there was a word that needed a quick trimming down).
https://www.wrexham.gov.uk/assets/pdfs/education/education_glossary.pdf
I’ll ask one of my neighbours, his children go to that school.

County Primary. In contrast to CiW (Church in Wales). Broadly speaking, these are the two types of primary schools you’ll encounter. The origins stretch back to the British and National schools of the Victorian era when, administratively, Wales was part of England.

Many thanks once again!

Thanks Rob. I should perhaps add that my posting wasn’t quite accurate, in that in England there are also a lot of Church of England primary schools (and some run by other denominations), as well as CPs. (I don’t actually know what the breakdown is).

In turn, I should also point out that many (most?) CP schools have recently rebranded to “Community Primary”.

And something else that I’ve just found on the same school story, haven’t had a chance to read it yet,

Was Llangennech a stand alone issue? No. Here’s why…

Some of you will have taken an interest in the recent row in Llangennech, near Llanelli, concerning the language status of Ysgol Llangennech. It’s been widely written about, but to get a real taste…

The topic of education in Welsh vs in English also came up in “Y Byd ar Bedwar“ a few weeks ago. It also featured the school in Llangennech. If anyone is interested, the documentary is still available on the S4C website for a few more days (“Y Byd ar Bedwar - Gwersi Ysgol Llangennech“, originally aired on March 21st)

The story, which was reported locally, caused some strong feelings at the time amongst some friends of mine (teachers and parents, but I don’t think of that particular school). I didn’t post it on here, as I don’t have a strong view, for or against. I can sympathise with both view points.

I think that the problem might arise from the small population of the area, which in effect is a village, hence only one senior school?. Some friends said that although they supported the growth of the Welsh Language and loved it, they thought that in their words “legislating” (making Welsh compulsory) wouldn’t be the best way to encourage the use of Welsh amongst the wider range of children. I appreciate that was an exaggeration.

I hope I’ve got it right. In fairness, I wasn’t able to fully understand the story as it was on one of those internet news papers whose adverts slow down my computer to a crawl.

So I only had my friends comments to go on.

Further up the Ceiriog and Tanat valleys its just hanging on as a majority language…but most of the youth leave to work in England…lost in the aether!