Every year, on the 15th October, Shwmae/Su’mae Day is celebrated across Wales … and even beyond! 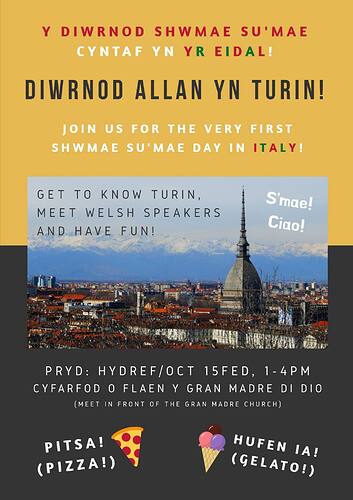 Since @heatherbroster will be in Turin that week, we decided to do a special meet-up with pizza, gelato and Cymraeg! p.s. @Deborah-SSi, how about that? 😉

It’s a day where everyone, no matter how little Welsh they speak, is encouraged to greet others with a friendly “Shwmae” or “Su’mae” and really try hard to use their Welsh.

Some cafes have special deals for customers that come in and greet the staff in Welsh, which is always a bonus! If you know of something special happening for Shwmae/Su’mae Day in your area, post the details in here so others can join in.

A special SSiW event that happened for the first time last year was a Shwmaeathon! Iestyn pushed himself to the limit by hosting an online Hangout for 24 hours, allowing SSiWers around the world to drop in and chat with him. This was made even harder by the fact that that was the day the heavens opened and Llandysul got flooded, so Iestyn had to run about finding locations that still managed to have internet access!

It was suggested after the event that if we were going to run it again, possibly a team of SSiWers in different time zones around the world might be a better way to go about it. If you’re interested in helping out with that, send me a PM with your email address and your location and we’ll get in touch in see what we can organise.

Indicate what times (British Summer Time, GMT+1) that you might be able to help:
https://doodle.com/poll/ds7wepakbc7a9uyn

I enjoyed participating from Iestyn’s hub last year and hope to take part this year from the Ystrad Meurig time zone. Can you let us know what would be required from participants or teams? Diolch.

I have to discuss the details with @Iestyn but I think that we will be able to set up the Hangout and give the URL for that, then volunteers will just have to say which hours they are willing to be responsible for, e.g. if we could get a few people in the US/Canada who would be willing to share the hours that American SSiWers are likely to be online, then that would allow Iestyn to sleep during that time.

The volunteers would join the Hangout at the time they’ve given and be there to chat with anyone that drops in. When it gets to the end of their session, the next person would come into the Hangout, and the previous person could leave - a sort of relay Shwmaeathon

Will there be enough capacity in the hangout if there is just the one? I popped in to the Swmaeathon early in the morning and it was quiet, but when I tried to look in later during the day, it was already full.

I may be interested in joining in informally, but having said that, we have a weekly meeting in a local cafe which has wifi and I thought we might host our own hangout so people could join us virtually. So what I’m saying is, following the success of Iestyn’s marathon, would there in fact be enough demand to have more than one hangout running?

Will there be enough capacity in the hangout if there is just the one? I popped in to the Swmaeathon early in the morning and it was quiet, but when I tried to look in later during the day, it was already full.

This depends on whether we decide to go with Google Hangouts, which has a limit of 10 participants, or with Jitsi that allows up to 99.
I was in Australia during last year’s Shwmaeathon and I thought I’d have to pop in during the last hour or so to keep Iestyn company in the middle of the night in the UK, but it was FULL

Thanks, Deborah. I’m more likely to be a participant than an organiser, but I’ll help if necessary.
It would be useful to know if I need to rejoin Slack or any other platform.

Hello all. I saw what Iestyn organised last year and thought that it was innovative and very well implemented- and popular!

Let me know what I can do to help!

Diolch Neil! I’m going to catch up with Iestyn this afternoon so we can make plans

If I’ve done it right, there should now be a Doodle Poll at the top of this thread where you can indicate the times you might be available to help. If it doesn’t work, give me a shout please. I haven’t created one of these before

I’ve filled in the gaps you left between 08:00 and 23:00 Ystrad Meurig time. I assume people in different time zones will see times appropriate to them.
EDIT: I’ve just noticed that “All times displayed in Europe/London” so I guess that Doodle will, in fact, display the times according to people’s ip address.

If I am to be “used”, I’d appreciate being told if I’d need any other software but Google Hangouts.

If I am to be “used”, I’d appreciate being told if I’d need any other software but Google Hangouts.

We will mostly likely use jitsi as it allows more participants at the same time than Google Hangouts. If we do, I can set up a trial link here so everyone can test getting in. I don’t think it requires any software, just the link. In fact, if you’re about now I’ll set one up and PM you the link.

Actually, I don’t understand that about ‘Europe/London’ seeing as Western Europe is 1 hour ahead of us.

I doodled myself in for 8am-2pm german time, so most of my slots coincide with @HuwJones , but the more, the merrier, and if no one else joins us we can talk about physics and stuff

Yes, we definitely need to have at least 2 people available for the different time slots in case something happens and one person can’t make that time. We don’t anyone to pop in for a quick ‘shwmae’ and find the place abandoned

Well…despite what’s going on in politics, UK is and will still be Europe anyway (not America or Asia or Australia)!

Ah, I see now. I was thinking it referred to time zones - the British time zone, and the European time zone, though I couldn’t understand why it only gave 1 time zone for Europe. OK, I obviously confused myself there

Here are the 4 European time zones - note that Portugal and Iceland are in the same time zones as Ystrad Meurig.

Imminent changes to daylight saving times add to the richness and diversity. 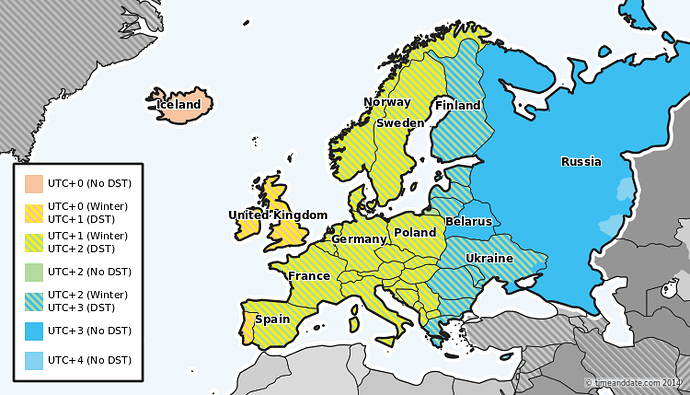 I added myself to the Doodle page for seven hours, split between the beginning and the end of the Shwmaeathon so that it’s afternoon/evening for me on Oct. 14 and 15 here in California in the Pacific time zone. I may be able to do more, but I saw big gaps at times that are convenient for me and went ahead and filled them up. So excited!

Also, being an English teacher online with students around the world, I have found this website to be very helpful when trying to figure out what time it is going to be somewhere else at a given time in the future using their time zone converter: https://www.timeanddate.com/worldclock/converter.html

Hi Sasha! I live in San Francisco, and know one other SSi learner who lives in Berkeley. I saw your name on the postcard list. So there’s at least 3 of us over here! Clare