This is gonna be a long one, fair warning and apologies in advance

So over levels 1-3 (south) I’ve got pretty comfortable with using ‘galla i’ instead of ‘dwi’n gallu’ etc. for “I can”, but I was just wondering what the conjugation is for short form present tense (and maybe what some common irregulars are) in general.

I was also wondering how common short form is in spoken Welsh and if there is an informal/formal distinction. Also is it a case of modals/auxiliary verbs being short form in the present but other verbs using long form? I live in the south east if that changes the answer from the south west at all. I’ve been getting a lot of conflicting answers from native speakers not in my area (haven’t found any in my area) and mates who studied Welsh to GCSE who are in my area :’)

Thirdly conjugation tables for “sai’n/so fe’n” type present negative conjugation are proving hard to find. If anyone could type out that list I’d be super grateful. I know most (though not all) of them but am unsure about spelling for quite a few. Is the “hi” equivalent of so fe’n (so hi’n?) just not really used (hence the dyw hi ddim teaching)? Also is there a “the plural noun isn’t” ‘so’ equivalent? e.g. “The children don’t want” being something like “so’r plant yn moyn”?

I realise SSiW doesn’t really like using tables and lists, so I understand if this is the wrong place to be asking these questions^.

I find short form is especially common in the south. It’s very rare that I’ll hear someone say “Wnes i ddweud” (I said) down south. I’ll tend to hear “dwedais I” a lot more.

Up north it’s a bit less like that though. Although you’ll still hear a lot of short form.

Sai’n is a bit hard to find any documentation on because it’s something that I believe is really limited to spoken Welsh only (and sometimes used in extremely informal written settings Twitter, Texting etc)

… and even then it’s generally only used down south - and not by everyone really. I use it loads though.

Does this help?
http://www.bbc.co.uk/wales/catchphrase/ysbyty_brynaber/lessons/language/lang17.shtml
(At bottom of page)

Just for reference though (excuse spelling if any errors)

The single ‘so’ can be used to describe anything that doesn’t fall into the above categories. I.e

I dont think you can put moyn at the end of that though. As that is a different constructon. I think you need to say The children dont want…(dont have a need on them).

Otherwise it sounds like a wrong way of saying its not the children that want.

My understanding is that the present tense short form (e.g. “galla i”) is also used for the future.

Thank you so much!! That document is great too, made sure to favourite for future reference

Ah I see, thanks for letting me know! I’ll search up that other post in a bit and link if I find it

My understanding is that the present tense short form (e.g. “galla i”) is also used for the future.

Oooh that would explain why I can’t find anything on short form present specifically, ta muchly 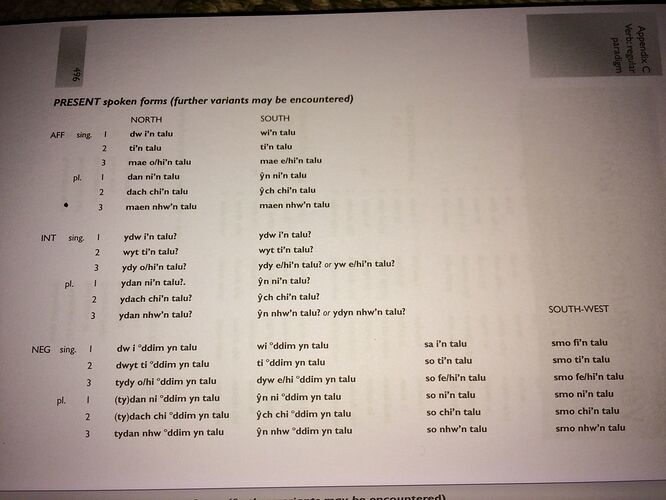 Also is there a “the plural noun isn’t” ‘so’ equivalent? e.g. “The children don’t want” being something like “so’r plant yn moyn”?

Thanks for clearing that up!

What textbook is that you’re using in the photo by the way? It has quite a few forms I’m struggling to find documented online and I might look into getting it for grammar in general

Sorry for the confusion

I’ll save @garethrking’s modesty by jumping in first to let you know it’s one that he wrote. Seriously: he rather got up the nose of some people by doing a grammar of Welsh as she is spoke, rather than as she ‘ought’ to be. There are also various workbooks etc. to accompany it

Thanks all the same for helping me out

Would never have found out about all of this otherwise^

I’ll save @garethrking’s modesty by jumping in first to let you know it’s one that he wrote.

Oh my gosh that’s incredible! As someone who loves their grammar tables but also wants to speak genuine colloquial Welsh as taught on SSiW, you’re a life-saver!! I wish I could say I was surprised about the prescriptivist reaction though :’)