“Accept the things to which fate binds you, and love the people with whom fate brings you together,but do so with all your heart.”

Imagine having a spell cast on your life, ensuring that it would only ever be filled with good people. What a glorious privilege it would be to live every day surrounded by warm friendship, kindness, generosity and shared passions.

This is life on Planet SaySomethingInWelsh.

It’s a ‘can’t believe my luck’ kind of feeling. To be reminded every day that we here, in the SSiW engine room, share our lives with so much awesome humanity, is totally delicious.

We started nearly seven and a half years ago, with a small patch of grass and a handful of seeds, and now look at the beauty and diversity which surrounds us every day - we are laden with friends, each one of them enduring to learn our much loved language, and we are eternally grateful for it.

About a year ago we met Justin and Eirwen Brisk on a fresh spring afternoon in the hills of Colwyn Bay. We shared cwtshis, lunch drinks and child shepherding duties.

Justin had stumbled across SSiW as he tentatively begun his journey to be a Welsh speaker, much to the delight of his wife Eirwen, a born and bred Welsh girl. They both fell in love with SSiW and immediately became eager to become more involved with us and the development of our courses, and so we became friends.

Justin was enthusiastic and charming whilst Eirwen radiated warmth. She was gracious, sweet-tempered, beautiful, intelligent and passionately Welsh - I really enjoyed getting to know her better.

We met with them both three or four times again during the next twelve months, as they traveled to Wales from their home in San Giacomo, Campo Rosso, to visit friends and attend family weddings. During this precious and exciting time, Aran, Justin and Eirwen continued to put their final plans together for the ‘Luxury 2 Week Intensive Welsh Course’ in the Brisk’s beautiful home, in the hills above Monte Carlo.

Eirwen had fallen in love with the idea of the Monte Carlo ‘Luxury Bootcamp’. She was passionate about her native language and excited about her home becoming a base for some alternative Welsh learning, for a splendid 2 weeks in May.

I don’t think I’ve ever met such a capable and organised woman, driven by her passions and loves. Eirwen was busy making sleeping arrangements, beautifying their already stunning home, arranging Grand prix tickets and discussing delicious meal plans, to name but a few things on her to do lists.

Unfortunately and quite devastatingly, last month Eirwen suddenly became ill and was found to have a particularly aggressive and unrelenting cancer. She wasn’t even given a fair chance to fight back and tragically lost her life within two to three weeks. It was an unbelievable shock to all who loved her… and she was loved quite passionately…

But it was with her usual bravery and gusto that she insisted, during conversations with her beloved husband, Justin and their wonderful daughter, Tamara, that the two week Welsh course continue. The courageous and ever capable Eirwen even took the planning a step further, and whilst graciously succumbing to her heartbreaking illness, she saw to it that her sisters also arranged to travel to Italy from Wales, to assist with the running of the house during the 2 weeks - her enthusiasm and initiative were unstoppable.

Eirwen passed away peacefully and surrounded by love, on the 20th of April.

On Saturday the 7th of May, Eirwen was laid to rest in North Wales, close to her childhood village of Llanfair Talhairn. It was an honour to be able to join her dearest family and friends in saying final goodbyes and paying tribute to the bendigedig Eirwen. It was a day full of love, colour and passionate song. It was a day in which we we got to know Eirwen so much better. It was a day in which we received such a clear understanding of how much the teaching of the Welsh language meant to her, and of how furiously passionate she was about continuing to make ‘Monte Carlo Bootcamp’ legendary… just as she was.

Huna mewn Hedd, Eirwen annwyl, you are and always will be, greatly missed.

This is Justin’s personal tribute to his darling wife…

Always smiling, always thinking of others before herself. On 20th April, 2016 Eirwen Hughes (aka Eirwen Brisk) joined the angels in heaven.

Eirwen created a cocoon of love and happiness around her family that is immeasurable. Her capacity for good humour, for always thinking the best about other people - oh and yet again warming our hearts with that radiant smile on good days and yes on difficult days too.

Eirwen was born in North Wales into a happy and loving farming family and leaves behind her three sisters, Mary, Eryl and Shian and brother Dewi, as well as Eirwen’s and my proudest achievement our daughter Tamara.

Eirwen’s first language was Welsh and one only had to sit by the warm hearth in her farmhouse to sense that Celtic spirit from generations back. I fell in love with Eirwen for many reasons and that was one of them.

Prior to this last Christmas I had undertaken to learn to speak Welsh too. Eirwen knew I loved everything about her, her beauty, her soul, her smile and her language and culture. I give thanks we shared her language as well as our love.

Eirwen was an adventurer and created circles of friends she cared about everywhere she settled - be it in North Wales, London, Montreal and Toronto, Canada, Los Angeles, California, France, Monte-Carlo and most recently in San Giacomo, Camporosso, Italy.

An intelligent business-woman as well as devoted mother and wife she will be remembered for being diligent, dedicated, loyal and trustworthy in absolutely everything she did - including many years as a banker in the UK and Canada, more wonderful years as an assistant to the partners in a design company in Los Angeles and in recent years helping our daughter Tamara run a company, that Tamara founded in the investment and tourism sector in the United States and Paris.

You never saw Eirwen learning a language but she was equally adept in Welsh and English, did business regularly in French and most recently thrived in the aqua-aerobics classes in Dolce Acqua with an Italian instructor. Eirwen’s Italian and mastery of aqua aerobics was coming along fine in the same effortless way she created harmony at home and
around her. Which reminds me she loved her sports be it playing hockey, squash, tennis or aqua-aerobics.

“With miles to go before she slept …” Eirwen was suddenly struck down by a stealth cancer that was so advanced as to be incurable. Not much more than a month ago she was proudly doing aqua-aerobics in Dolce Acqua with no signs of illness at all.

Tamara and I spent the last two weeks of Eirwen’s what can only be called serene life in hospital in Imperia. She never asked “why me”, she never lost her smile, she never cried, she never looked distressed. I asked the other patients and doctors whether she cried or was distressed in the moments we were not at her bedside. They said “never for a moment” and the doctors were unanimous they had never seen a patient so serene from start to finish. One never wants to make light of the word but it was truly saintly.

Eirwen fought to the last in those last two weeks to do what she always strived to do and achieve which is look after Tamara and me and still care about everyone she knew. Eirwen knew we needed her. In heaven smiling down at us she knows we will always need her. When someone is that special there are no words… Except Eirwen did have the final word - in her last moments when she knew she could fight no more (and bravely fight she did) she spoke her last wishes clearly to her wonderful daughter Tamara and to me. Nothing was left unsaid.

written by Justin Brisk (proud and loving husband of Eirwen 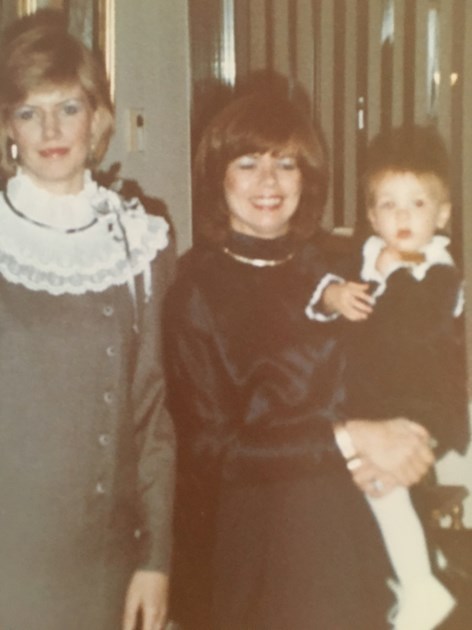 There are no words to add to these Catrin and Justin. X

I don’t want to believe this terribly sad news, but fear it must be so.

Heartfelt condolences to Justin and all the family.

This is so sad news. My thoughts are with Justin.

Although I didn’t know Eirwen and I only “know” Justin through his posts here, I am devastated to hear this sad news. It is clear from your heartfelt tributes that she left a beautiful and lasting legacy. My deepest sympathies to Justin and Tamara, and to all those who loved Eirwen.

I am so sorry to hear this. My deepest condolences to Justin and Tamara and the rest of their family. Although I didn’t know Eirwen either, I have very much enjoyed Justin’s posts and being a part of the larger forum family. Thank you Catrin for sharing your and Justin’s tributes to her - she sounds like she was an amazing individual who will be deeply missed.

I simply have no words. Everything was said here. I didn’t know Eirwen either and know Justin also only by the posts on this forum, full of enthusiasm, joy, love and care … My deepest condolences to Justin, Tamara and the rest of the family and to all who had the privieldge to know her and love her.

So sorry to hear this. My condolences to all her family and friends.

Such sad news. Beautiful tributes.My thoughts go out to Justin and Tamara.

Even though I know Eirwen only by name I still feel the sadness of loss in the SSIW family. I kno what this feels like and I send heartfelt condolences to Justin and Tamara and to you Aran and Catrin.

Thank you to you all for your love and kindness. It is a privilege to be here in San Giacomo with Justin at this time.

You don’t even know how much you help Justin just right now with just being there, @aran, and that’s what he deserves - only the best from the best!

My thoughts are with you all (although you maybe don’t believe me) from the morning I wake up (and you know it’s really early in the morning) and until I go to bed, trying to send as much good energies toward your way as possible.

Beautiful tributes to Eirwen @CatrinLliarJones and Justin … Thank you for sharing them with us.

I’d like to add my condolences. Again, I didn’t know Eirwen, but from reading Justin’s posts about her, it is clear she was very special.

Very touched by this heartbreaking news & the spirit of Eirwen that is singing out of the lovely words & condolences for her & her family here. My thoughts are with Justin, Tamara & everyone grieving her loss.

Since Justin and Eirwen have contributed so much to SSiW, here is a good place to add my appreciation and deepest sympathy to Justin and their friends and family.

So very sad to hear the news. I haven’t met Eirwen or Justin, but it’s clear that she was a very special lady indeed and will be very much missed. My heartfelt sympathy to all who knew her.

Although I didn’t know Eirwen and I only “know” Justin through his posts here, I am devastated to hear this sad news. It is clear from your heartfelt tributes that she left a beautiful and lasting legacy.

and from me. No words can be enough.