Following up the question in Newydd yn dod about the origin of this international word, I’ve discovered that it really does come from Welsh, but by an indirect route. Welsh settlers in an Island in Newfoundland named in Pen Gwyn, because it was white (due to the guano from the birds that lived there). These birds were great Auks, which don’t have white heads. They received the "scientific name “Pinguinnus” derived from the Welsh name of the island, and this led the name that most languages now use for the south atlantic and antarctic flightless birds, that look rather similar to great Auks but aren’t actually closely related. 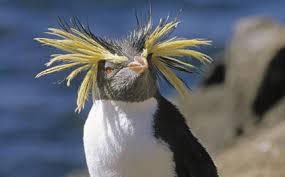 Hi, dava! It’s great you have an interest in such things. I too have a passing interest in the historical derivations of words.
The “is penguin Welsh” question is one which popped up more than a few times on the old SSiW forum, and it’s something I’ve looked into a bit. As far as I can see, the first mention of “penguin” in any language comes from Sir Francis Drake’s logbook, where his chaplain describes it as Welsh.* It seems to have then spread from there to scientific textbooks and gained a foothold throughout Europe.
Everything else is seems to be guesswork.
(It’s often (normally?) thought of as having been transferred from the auk, due to the distinctive white patch on the similar auk, but there is no evidence for what the Welsh for ‘auk’ was!

)
Thus the “Island in Newfoundland” idea seems only to occur much later, and seems to be just a guess- and doesn’t, to me, really fit in with what is known.
However, you may well know more than me about this!

My reference and what it says:

HH Shugart. How the Earthquake bird got its name and other tales of an unbalanced nature. Yale University Press, 2004. Chapter 3. The Black-Headed Bird Named Whitehead. p26
“Their name derives from two Welsh words. Pen is Welsh for head, and gwyn means white. Some penguins have crests, eye decorations, and what might be described as bad haircuts. While certain species of penguins may have some white on their heads, no penguins have white heads. They are not named for their appearance at all: they are named after an island, a place far from where they are found. The “white head” that names penguins is a great, guano-whitened headland on an island near Newfoundland in the North Atlantic. It was a major breeding site for the now extinct great auk, a black-backed and white-bellied diving bird slightly over 2 ft (70cm) long…
… Great auks were found on White Head, or Penguin Island, in large numbers in the sixteenth century, when the island was given its name. On account of their rocky home, great auks were called penguins long before Europeans misnamed the similar-looking but unrelated bird of the far southern oceans. In a sense the great auk is still called a penguin, as indicated by its genus name, Pinguinus. The penguins of the Antarctic and southern seas were named for their resemblance to the auks of the North Atlantic, which were familiar to early explorers and sailors…
—Ecological convergence explains why the black headed penguins were given the name of similar-looking black-headed birds that lived on a promontory or the faraway island called White Head.”

great auks were called penguins long before Europeans misnamed the similar-looking but unrelated bird of the far southern oceans.

Unfortunately, this is not provable

The word penguin appears in the journal of Francis Drake in 1578, describing, well- penguins!
Whereas the earliest reference of Funk Island as being called something similar to penguin island seems to have been in French in 1626.
By that time, in French pingouin seems to have (since 1598) been used to refer to great auks (as well as penguins!) Seemingly taken from Dutch books (which apparently the French took a number of such terms from.
The whole thing becoming more complicated!
So the island could have been named after the birds by a Frenchman who used a word describing similar birds from a Dutch book which had taken the word from an English language logbook using a Welsh word to describe penguins!
Or the name of the island could be coincidentally from the Welsh for white headland.

The picture gets murkier! Shugart seems pretty confident about his story, including Penguin Island being given its name in the 16th century, but (at least on the page I read via Google) he doesn’t give references to sources for the statements he makes.

I think you know more than me about it - until this weekend all that I “knew” was that someone had told me that penguin is an international word that originates from Welsh Over the last few days I’ve learned a lot, but not the 100% true version!

So the island could have been named after the birds by a Frenchman who used a word describing similar birds from a Dutch book which had taken the word from an English language logbook using a Welsh word to describe penguins!

Vetgans (fatgoose) is a Dutch word for pinguin. As it happens, ‘pinguis’ is Latin for fat, like English ‘pinguid’. I posit this as an alternative derivation.

At least, that we can be sure about, which is what matters. A lot of people seem very sure about such things, but like mist, that surety usually becomes more tenuous the closer you look into it.

Posit away! I wouldn’t be surprised if the word had many influences working upon it, in one or many languages. A lot of words do!

Grandmother and sucking eggs time here. (so a pretty normal Monday night, but the less said about that the better.)
I tried googling “vetgans” in Dutch Wikipedia, but it redirected me to “pinguÏns”, where it said it was probably derived from the Celtic. This means nothing, I know. Also found elsewhere a few references to “fettgans” as being used in German from the eighteenth century.
Some sources implied it was a back formation from the similarity with the Latin. Could be rubbish. Could be a guess. Could be true. The thing is I know nothing about these languages.
But not only are you Dutch (which is always a good thing) but you also have an interest in such matters. (words and their origins, not just penguins. Although you may well be strongly interested in penguins. No problem, I’m not one to judge.) So can you tell me more about this “vetgans” of which you speak? Is it the usual word in Dutch, do you know how far it goes back? I am intrigued. Thank you for any information you can give!

It is not common, vetgans, but I remember reading it in school in stories about Dutch mariners. Apparently, it was also used for the (now extinct) Great Auk, the original penguin

Check out @ramblingjohn’s latest “What’s outside” thread posting for a picture of penguins.

you probably know the details better than me!)
I am put in mind of a quote from an etymology blog- "bird names are often odd and pose many insoluble problems."