North Welsh and South Welsh, where is the border?

Having a debate about where the border between north Welsh and south Welsh speakers sits. I lived in Ceredigion for a few years and when I moved south, noticed that a lot of words were different. How far south is north Welsh spoken?

To complicate matters further, a native Welsh colleague was talking recently about what she considers the strange dialects of central Wales. So there might be North, South and Middle!

It’s a bit of a mythical border - Ifor ap Glyn tried to find it in a series some years ago on S4C!

Alan, this is exactly why we were arguing about it at work!

This is not really something to worry about😉. In my experience (about a year of learning now) I find that I hear Northern Welsh in my locality and I try to use Gog myself but I also converse online with folk who use a mixture. Over time you get to understand either as your vocabulary grows. I believe that’s the best in the long term, though it can be confusing at times - especially for learners but even for native Welsh speakers.
e.g. I used ‘llaeth’ for ‘milk’ in Dolgellau and the young man in the coffee shop understood me even though that’s the Southern word. Gog is ‘llefrith’. Then again, my use of ‘lan a lawr’ raised an eyebrow from a very fluent Welsh speaker, who has lived in North and South Wales and England. The Northern version is ‘i fyny a lawr’ meaning ‘up and down’. If you live in Wales and don’t intend to travel then fine, stick to one version - whatever the locals use, but I guess the ideal is to eventually become ‘bilingual’!
To complicate matters, much of the ‘official’ Welsh used in Wales is in the Southern form! And dictionaries are often biased, though many have both versions where it’s appropriate.

I think it’s worth remembering that the borders are fuzzy and there are transitional zones, and often these are different for different words and grammatical constructions. 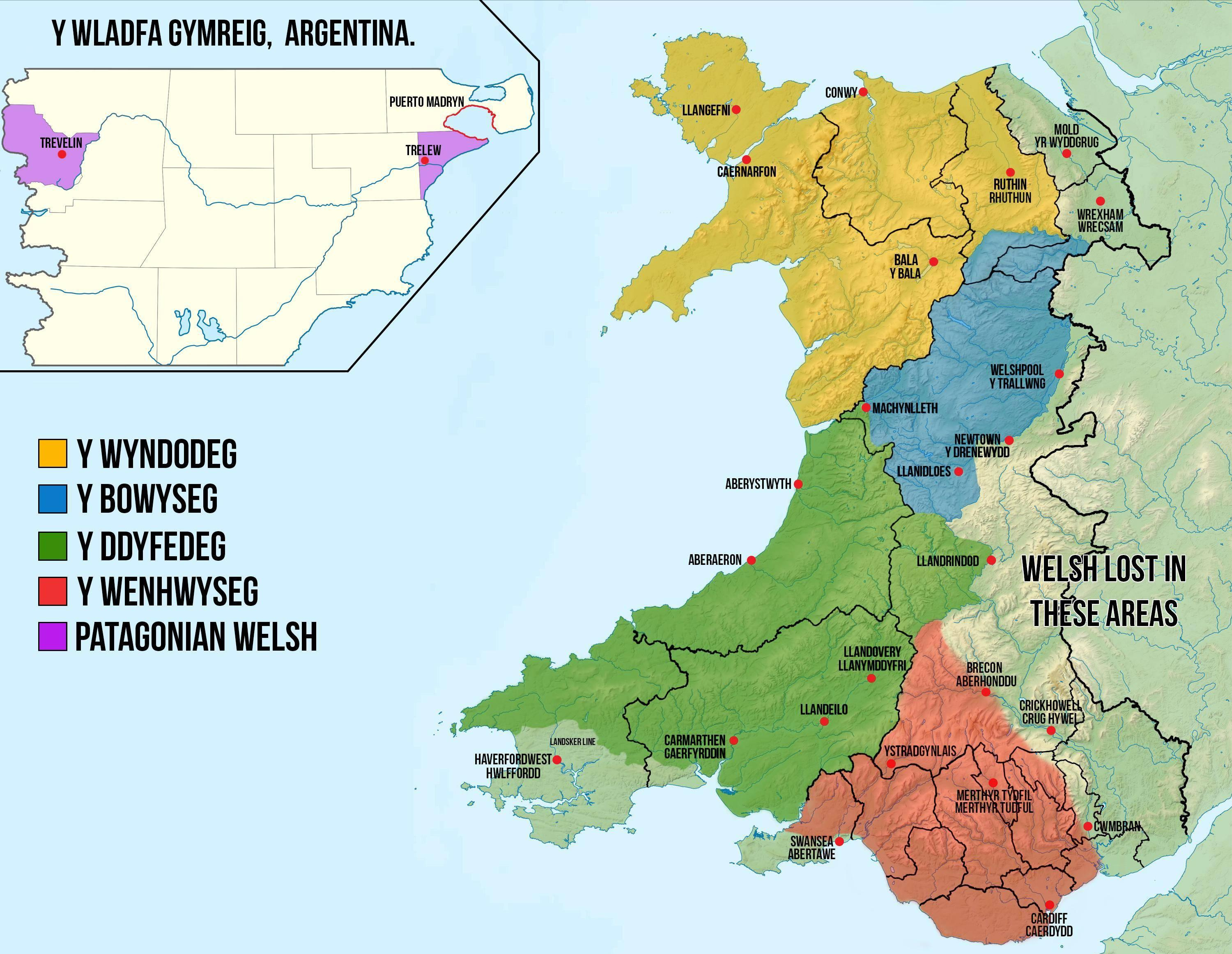 I have friends in Dolgellau who naturally use llaeth. I think the border for the use of that particular word is somewhere north of there.

Ignore all these people, Emma.

The official N/S border for Welsh is a line running directly E-W from the saloon bar of the Y FFarmers pub in Llanfihangel-y-Creuddyn, Ceredigion.

You can check this on Wikipedia (the English article, not the Welsh for some reason). In fact, please do.

I’ve been to y Ffarmers on more than one occasion. There is no saloon bar.

I mentioned once before that my first conversation on the N coast consisted of me trying to be helpful by using Northern words and the other person deliberately using Southernisms likewise. Very confusing

I’ve been to y Ffarmers on more than one occasion. There is no saloon bar.

Ah, hang on and aros funud fach… Wiki doesn’t mention any saloon bar, it was ME that got that bit wrong!

You misremembered. The border runs through the middle of Caffi Cletwr. There’s tables on one side of the room where it’s all sbia this and t’yd 'ma that, while a mere table’s distance away to the south they’re all muttering about g’tre and ffili stopo moyn.

Thanks for posting this question. I’m from Rhymney Valley but was taught Welsh at school by teacher from North Wales, and as an adult I’ve set out to learn the Welsh that would have been native to me had I been a first language speaker from my Valley. So, as a result, my Welsh is really mixed up. Also, if I want to go somewhere to immerse myself in Welsh I’m going to have to head North, right? That so?

No, well not too far North. After the lockdown there’s the Soar Welsh centre in Merthyr which has a cafe. If you are looking for more widespread Welsh-speaking areas, then Carmarthenshire and Ceredigionshire will probably be your closest. I’m not saying that everyone will be speaking Welsh, but there will be plenty who do.

I had to go to give a seminar once in Aberystwyth and Bangor. I gave it in English but in a mad fit of bravado said I was happy to take questions in either Welsh or English. In Aberystwyth I got away with it. I understood 90 per cent of each question and was able to answer in English or pidgin Welsh. In Bangor the first question came in Welsh and at first I couldn’t make out what language the questioner was speaking! Panic ensued but I realised it was Welsh and picked up a few words. Guessing hard I answered the question I hoped he’d asked. After that people got the message and stuck to English. So wherever the border is, it’s somewhere between Aberystwyth and Bangor, speaking from harsh experience!

.
So we have North Walian, South Walian and the ‘official’ form. So, that is three versions of Welsh, even if "much of the ‘official’ version is in ‘the Southern from’.

So, presumably, a lesser much of the ‘official’ form is also in the ‘Northern form’, then.

How does one go about learning the official form?

Once one discovers the answer to the last question, one can then set out to become what logically has to be trilingual, or at least two-and-a-half-lingual.
.

What versions are spoken in Wrexham, and in Newtown, I would really like to know? I pass through both towns quite regularly, in non-covid times, and break my journey in each, when using my Wales Seniors’ bus pass to go from Newport South Wales to Chester.

.
One wonders where ‘official welsh’ is actually spoken.

But does anyone actually speak it?

Maybe it is just a written language.