Some kind of sign or sticker to display on or outside of shops and public buildings that says something along the lines of ‘We’re happy to help out Welsh learners’. Bright orange or something else equally noticeable and inviting.

Getting over that initial ‘Oh dear God, I’m about to speak to somebody. Maybe I’ll just find an English speaker instead’ is a big hurdle for many learners of foreign languages. It’s also helpful to know that whoever you’re talking to will be patient as you stumble through whatever you’re going to say.

@Deborah-SSi did a lot with this a while back, with a sticker that @kingskidgirl designed - it might be an interesting idea to revive, with a wider team…

As I am someone who has not yet managed to “get round” to arranging a skype conversation, I have been thinking about what’s stopping me.

I know there is a psychological barrier for many of us when jumping into our first conversations. I am nervous of arranging a one-on-one call, but I think if there was a group or several small group calls scheduled I might be brave enough to join in one. Or perhaps beginners could listen in on some skype calls or group calls first to see that it is not that scary (some overlap here with technical ideas in other threads).

Maybe there could be some scripted conversations to try, based on the SSIW lessons or listening exercises, so that learners could practice, eg issue recordings of one half of the conversation? Or is that taking hand holding too far?

Reviving the “your Welsh is good enough” campaigns. Drop the “perfection” that we hear. Discourage the mocking or cringing of poor Welsh (goes hand-in-hand with having more speakers, the more we hear will mean the more we hear a variety of quality and proficiency).

I also think discouraging the “purists” on learners sites. People you push for the use of “hoffi” over “licio” just because it sounds more Welsh. Radio Cymru had a bit of a mini-series about the history of words and showed how old many borrowings are.

Maybe one element of this is not feeling we have the skills to extricate ourselves from misunderstandings or when minds goes blank, so perhaps learning some verbal ‘escape strategies’ could help (or even how to waffle convincingly in Welsh!)

I find the phrases chimod/timod or “pethau fel na” Are useful in this situation.

@dee did a lot with this a while back, with a sticker that @kingskidgirl designed - it might be an interesting idea to revive, with a wider team…

Yes, I have quite a few of the stickers left. They’re very good quality, printed on vinyl that can adher to the inside of a window and display to the outside so no sticky residue. I also have some the other way round that can be stuck on a surface if there isn’t a window handy.

I’m not on the right computer at the moment, but when I am I’ll post an image here so you can see. Our idea was similar to yours - that the orange speech bubble that shows you can speak Welsh somewhere might not necessarily mean that the other person is sympathetic to someone who is not totally confident in the language. The idea of the sticker was to show shops and businesses where the staff were happy to be patient with learners and not kill their confidence by immediately going into English.

Some kind of sign or sticker to display on or outside of shops and public buildings that says something along the lines of ‘We’re happy to help out Welsh learners’.

I think thats an excellent idea, but it would need to be adopted at a national level.

can you imagine every shop with a welsh speaker willing to encourage learners?

It could conceivably start locally. If it got enough exposure on social media, then I’m sure it wouldn’t be impossible to get Heno or Bore Da to pick up the story. Then it could become national.

could Aran be persuaded to create further levels or vocab units? I find that it is so much easier with the SSIW vocab units it increase the range of vocab i know that any other way because its in context.

How far have you gotten into the levels? You could start reading if you’re comfortable with pronunciation etc. There are many great books for all levels of learners.

I started with Bethan Gwanas “bywyd Blodwen Jones”, then moved onto Bob Eynon, then T. Llew Jones and Manon Steffan Ros. I didn’t understand loads at first, then I started to find I was picking up new words from context. Combine it with a Gareth King book and away

Vocab lessons may lack context. Do you get what I mean?

OK, not the best image, but it will give you the idea: 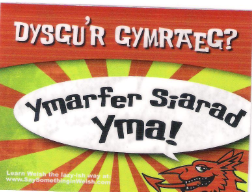 could Aran be persuaded to create further levels or vocab units?

We’ve talked about doing situational stuff - so, for example, 10 lessons or so focusing on the Welsh you need if you’re a) serving in a shop or b) going shopping, that sort of stuff…

So if a project gets to implementation point that would require us to build some stuff like that, we’d definitely be willing to look at it…

I have had the go ahead to advertise and promote the use of Welsh at work, would I be able to get some of these please? I’m in Tresaith next week, are you around?

I have had the go ahead to advertise and promote the use of Welsh at work, would I be able to get some of these please? I’m in Tresaith next week, are you around?

I’ll be more than just around. I’ll be there helping to run things

I’ll bring a bunch of them along with me.

This is great. I’d love to see these around when I head to Barry in September.

This is great. I’d love to see these around when I head to Barry in Sept