Just wanted to share some good resources I have found in Middle Welsh, with explanations of differences in spelling and grammar. Both really awesome, and complete with exercises in readind and rendering Middle Welsh texts into modern spelling (and who doesn’t love some good exercises).

Seren, I wanted to ask if middle welsh was close to modern welsh. Someone told me once that the welsh we speak today is very close to medieval welsh. Is that true?

Well, the spelling is certainly rather different, but I wouldn’t say that it’s difficult to understand in terms of grammar and vocabulary. Some people say it’s because the English have forbidden the language for so many centuries, so it didn’t really have a chance to change that much. So I don’t think that it would be much of a problem for a modern Welsh person to understand a medieval text (provided they have a spelling dictionary for occasional things like “kyn - cyn”)

@preston’s question reminded me I wanted to post a link to this:

It’s by our (Russian) academic Alexander Falileyev, who also has an excellent textbook on the Old Welsh (being published now in Welsh). The Russian text of the textbook is available online.

Middle Welsh seems to be popular in Arkansas! Does anyone know a class that can beat this? 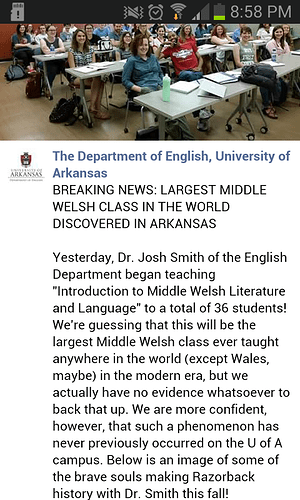 I’ve just disappeared for a few minutes down a few links and noticed that “gwnn” meant I know (a person). Gwnn sounds a bit like the Northern British “ken”, which means the same thing. I appreciate that ken comes from the Germanic kennen, but the OED traces it back further to an Indo-European root shared by can and know.

@Iestyn is teaching us a word that sounds like “nabod”. Do we still have the word Gwnn in Modern Welsh? I suspect not.

Do we still have the word Gwnn in Modern Welsh?

edit - In fact, “Wn i ddim” is one of those phrases that everyone seems to remember from their schooldays in Welsh classes. Maybe it just came in handy in class too much!

There is a little talk on the matter on ForumWales here, as always! (Just for anyone interested. You normally get several conflicting answers, opinions and attitudes on ForumWales about what Welsh is used or is best - but that is what happens in the wide world anyway!

edit - In fact, “Wn i ddim” is one of those phrases that everyone seems to remember from their schooldays in Welsh classes.

I would never have thought of it as learner Welsh, in fact never heard it all until recently - at school for me it would have been the full blown Dydw i ddim yn gwybod, even shortening of dydw wasn’t ever mentioned and the “wy” in gwybod would have been pronounced “oy”. I liked Welsh at school, but never figured out which planet that sort of Welsh was spoken on.

I don’t think of it as learner Welsh at all!
Simply that it is so well used that a lot of people remember that phrase in particular.
To me its as valid as “sa i’n gwybod”, “dydw i ddim yn gwybod”, “dw i ddim yn gwybod”, all of which are perfectly valid, used and will be understood!
MInd you, round where I grew up one of the commonest would be along the lines of “nagw i’n gwbod”.

The idea was to teach Welsh words which were standard, would be understood everywhere and used in formal situations and literature. That people could first of all learn standard Welsh (which is a thing) and then move their language off to whatever dialect it was that people they spoke with were speaking.

I can see some good points in that. Taught well, it could work well.
I seem to see less of a problem with slight differences in pronunciation on courses than a lot of people- this has to be done even with SSiW, after all! To me, the strength of SSiW is in the manner of its teaching rather than the actual words and forms it teaches.

I have no problem at all with learning a standard language, such as the one I and many others were taught at school. What was missing was an explanation or insight into what we were learning and why were learning it. A simple pathway would have been nice - 2-3 years learning as we did, followed by routes into dialects for those who wanted to or literary Welsh for others perhaps.

The thing that strikes me now is that I had two first language Welsh teachers - one from the North and another from the Neath valley and they never gave us that insight into what they were teaching us, how they spoke conversationally and all the nice things that surround the language.

I suspect there were a lot of people taught back then who knew more than enough to hold a stilted conversation in Welsh, but you always knew that native speakers would be talking very differently. To me that was a problem - I could never bring myself to say rydw i’n hoffi coffi outside of the classroom, simply because I knew no-one else talked like that (well these days many people actually do, but back then they didn’t).

When I came back to Welsh it had nothing to do with being uderstood by others - it was all about learning dialect. Being able to hold a conversation in Welsh would never be satisfying enough, I knew that I had to have those extra bits and bobs and better understadning of how and why people spoke the way they actually do.

We are all different and have different reasons and needs and I guess that was a personal quirk and chip that I had to get off my shoulder.

The difference for some of us is that learning Welsh is not like learning a foreign language. If I didn’t speak English, but was surrounded by native English speaking Welsh people and I was taught in a language lesson “It is cold today and the wind is quite painful” while people I knew were saying things like “It’s blo.dy nobblin today innit and my yurs are killin me”, then I would feel a disconnect from the language lessons.

It’s not that the lessons would be wrong - far from it they would be teaching the correct and most appropriate form of English, where you would be understood everywhere. Indeed the local English I would want to learn would be slang or bratiaith and totally wrong for teaching in schools, but when you have been exposed to that from a young age, but can’t speak it, then that is what the odd few lunatics like myself want to be able to say.

Basically I am not learning Welsh as a foreign language and I’m not learning it in the same way I would learn any other language out of need or simply wanting to be understood. A lot of people I know have had perhaps too much exposure to first language speakers from a young age to be able to accept very easily certain ways of saying things - correct and perfectly acceptable ways of saying things.

It is a personal problem and issue for myself and I suspect a few others and it is very hard to rationalise. The Welsh I always wanted to learn was probably unteachable and only something that could be picked up by talking to people, but the forms on SSIW do open a window to that, without tripping over into bratiaith - although what actually constitutes slang, patois or bratiaith is a very subjective thing anyway.

Schools in the Netherlands would never teach Geordie or Scouse and it would be crazy if they did, but if you happened to have parents and close family who came from Newcastle or Liverpool then you would have a bit of an urge to learn to talk a little bit like them I suspect.

Yeah, I know what you are saying, and feel it myself. When I started learning, my desire was to speak the Welsh my family speak, the Welsh I heard where I was growing up.

I think I’ve mentioned before about classes where people will swear they can’t speak any Welsh, don’t know a word of it, but then on the first classes will react suspiciously to what they have been taught, saying “that doesn’t sound right!”, and being of course right in the local dialect commonly.

But whatever Welsh you are taught, it’s never going to be the exact form of Welsh you are ultimately looking for. People don’t speak exactly the same way in an area or even a family. If you go with the flow, you will end up speaking the dialect you are familiar with - with the added benefit of being familiar with a more standard language.

Again, my father is a first language Welsh speaker always regretted not paying more attention to Welsh classes when he was younger. (Apparently given by a very good and approachable teacher, unusual for the time!). So such things are useful to anybody, whatever their level of Welsh!

I totally agree and I admit to my sense of irrationality about these sorts of things. Basically my instincts have always driven me in the opposite direction to perhaps someone who has always spoken Welsh at home and wants to expand and refine their language skills. I feel pretty comfortable and confident about things at the moment and a bit more at ease about it, becuase I have managed to fill in some of the gaps and realise that these informal language skills are quite individualistic and something that has to be acquired by listening and speaking.

Interestingly now I would also like to know how to speak a few things very formally, it would provide a nice contrast on occasions and very appropriate for talking to some people.

It is all a journey and I can very easily understand local people talking now and feel much more comfortable with what I am able to say.

Just so you know, what you may think about individual examples or not, there is a bigger difference between such forms as you give in Welsh and corresponding literary/spoken forms in English.

Saying “Yr ydwyf i yn myned yr awr hon” would be nothing like saying “I am going now” in English, and I certainly wouldn’t recommend any course using that as the form to be concentrated on.
.

I admit to my sense of irrationality about these sorts of things.

these informal language skills are quite individualistic

Absolutely. They are very important things, some of which can and should be taught, but a language is going to end up being such an individual thing that it would be impossible to have one noticeably tailored towards you - and picking up a bit of standard is always a good thing, in my experience!

I had an Uncle who none of us thought could speak any Welsh. He came back to Wales for a visit after living in Canada for twenty years and we visited a chapel. He stood in the pulpit and gave an amazing sermon - all in Welsh, in the style of a stereotypical old fashioned preacher, full of fire and brimstone. This language, full of "yr ydwyf"s and "yr hwn"s reminds me of that and I love it, but it really is for that sort of an occasion. It can be very powerful and nostalgic, but I suspect that in the street it would make you sound like a complete lunatic.