Sorry to hear (a bit belatedly) of the death of Meic Povey, at a relatively young age:

Among his many other claims to fame, I believe his sister plays Kay Walsh in “Rownd a Rownd”.
Edit: Just checked, and Kay is played by Buddug Povey).

Edit 2: An article confirming that she is Meic’s sister:

Not only has Meic Povey penned his latest play – he’s directing it too.

There’s a coincidence! I was given the “A Mind to Kill” boxed set for Christmas, and am just working my way through it. Noticed that Noel Bain’s boss (Bevan) was played by one Meic Povey, and have just watched series 1, episode 3, in which a very young looking Richard Harrington played the younger brother of a couple of hardened villains.

I only saw a few episodes of “A Mind to Kill” when it was on Channel 5, and couldn’t remember much about it except that Philip Madoc is always extremely watchable. But what I am struck by now is how dark it is! It’s very good though! And very meaty at about 1h 45m per episode, or something like that.

Pity there is no Welsh on the DVDs (except very occasionally, e.g. when someone is watching TV, presumably S4C).

That could have been me talking, Mike: I too had the box set for Christmas, having only watched a few on TV when it was originally broadcast, and am likewise ploughing through the whole collection. I too was hoping for some Welsh extracts because I’d read somewhere that there was an ‘Extra Features’ section which included part of the Welsh language version of one story - but there are no extra features. And for good measure, I was surprised to see a fresh-faced Richard Harrington, and in a major role.
Spooky, eh?
Finally, you’re right, it’s ‘Welsh noir’ at its noirest - a prototype Y Gwyll/Hinterland. Incidentally, have a look at this link, if you’re interested, on R. Harrington’s views on the differences between filming Y Gwyll in Welsh and English. No doubt the same applied to A Mind to a Kill: 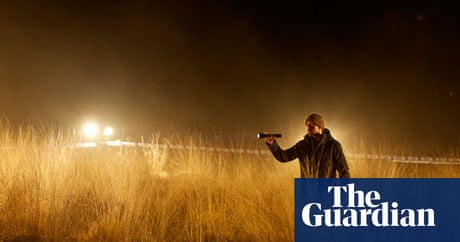 Hinterland – the TV noir so good they made it twice

As if it wasn't hard enough filming a harrowing detective drama in the freezing wilds of Wales, the makers of Hinterland did it all twice – once in Welsh and once in English. Stephen Moss spends a day on set


My Welsh tutor in Wrexham is a dead ringer for Hinterland’s Mali Harris, by the way. When will the coincidences end? Hwyl, a diolch am dy ateb.
1 Like
mikeellwood December 31, 2017, 12:16am #5

Just watched another episode, which included a very young Mark Lewis Jones (“Steve Baldini” in “Un Bore Mercher”, and the Lib Dem chap in “Byw Celwydd”). and a very young looking “Terry” from “Rownd a Rownd” (played I think by John Glyn Owen).

Incidentally, have a look at this link, if you’re interested, on R. Harrington’s views on the differences between filming Y Gwyll in Welsh and English. No doubt the same applied to A Mind to a Kill:

My Welsh tutor in Wrexham is a dead ringer for Hinterland’s Mali Harris, by the way. When will the coincidences end?

Hwyl, a diolch am dy ateb.

And in Series 1, episode 6, as you may have noticed, there was a very young looking Richard Elfyn (DCI Huw Parry in Un Bore Mercher and the Prifweinidog in Byw Celwydd).
Speaking English with a not particularly Welsh accent.

Only when none of us has a clue what the tutor is saying to us in Welsh, Mike.