Listening Practices Level 2 - what to aim for?

Well. Listening practices just seem to go faster and faster.
And voices getting weirder and weirder.

They’re pretty funny, and I do catch a few words here and there, but I doubt I’ll ever be able to hear and understand everything.
So I was wondering: what should we really aim for when we listen to them?

I think the idea is just to let them wash over you. Don’t try to understand them. It’s about getting your ear tuned in to the language. I’ve also found it helpful to do the same with Radio Cymru stuff. Then all of a sudden found myself understanding (rather than translating) a lot more than I realised.

So I was wondering: what should we really aim for when we listen to them?

Exactly what Kimberley said - let your attention rest on them, but don’t worry about the understanding - their real value is kicking in when you hear a sentence in normal spoken Welsh and then realise you’ve understood it all in one go without even needing to think…

Thanks @Kimberley. I’ll keep this in mind, next time I listen to them.

About Radio Cymru: I’m sure it’s a good tip and there was also an interesting post by @Baruch mentioning this. 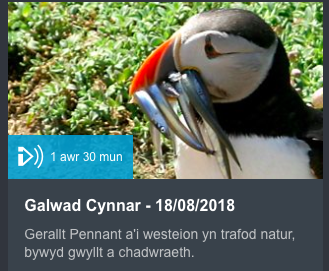 I’m afraid it’s going to be a bit hard to keep my mind focused on those completely unknown topics.

One more question, at this point: what about (keeping on) listening to songs, with this approach in mind?

Try Tudur Owen’s shows. He’s a comedian and presenter and he does his shows with two other people so it’s quite ‘chatty’.

Definitely keep listening to songs. Listening to Swnami is one of the reasons I know gwenwyn = poison and you never know when that might come in handy

One more question, at this point: what about (keeping on) listening to songs, with this approach in mind?

Thank you for bringing this up. I am struggling too. There are moments of clarity but I mainly catch a word and find myself concentrating on translation of that word. By the time I have worked it out the whole world had moved on

One question, do we listen to just the latest one we have got to or do we need to practice with past ones too? At the moment I am just going with the latest.
By the way, thanks for using Coffi Du as an introduction. I think it’s brilliant. For the first time since I was a teenager I sought out lyrics so I can sing along. So that’s a little extra input for me too.

At the moment I am just going with the latest.

The latest is all you need - if you want to add extra work, then using the older ones is fine, but that’s very much a matter of optional extra suffering…

The latest is all you need - if you want to add extra work, then using the older ones is fine, but that’s very much a matter of optional extra suffering…

Listening to level one practices (except the last one), is not suffering, it’s amazement and satisfaction for realizing how many words and sentences I can catch, compared to just a month ago!

I thought my app was misbehaving last night, but it seems the extra challenges every five lessons that appeared, and didn’t work, were just place-holders for new listening exercises! Now I’ll have to do more housework!

I have been listening to the first listening practice in Level 2 for some days now, and I’ve been picking up more and more snippets of what is been said.

I’m letting it ‘wash over me’, but I’ve been hooked into concentrating and trying to understand what’s been said at a couple of points, because I think I’ve misheard. Can someone reassure me that no one dies

in the making of this listening practice?

I’m fairly sure not.

I mean, I think it’s the kind of thing I’d have remembered.

[Although you never know…

I have a feeling I’m going to be falling about laughing when I find out what the words actually are.

I don’t want to say what I hear, because other people might start hearing it as well! It’s 18-19 seconds in, the first time round, after Catrin’s said that she enjoyed the film, you exchange a couple of sentences, she asks you a question and you reply…??

Happily, you later talk about the ages of the children sitting on the sofa, so all’s well…I think.

I’m kind of tempted to go and re-listen myself now!

I heard it that way the first time and I always hear it like that.

And I mixed up cysgodion and pysgod in Llwytha’r Gwn by Candelas - mondegreens in Welsh!

Perhaps, I should move on to the next listening practice - if it’s safe…

Do we want to talk about how easy it is to transcribe English lyrics without mishearing anything?

I’m sure than once you get past the confusing early stage of learning, Welsh is much easier to understand!

(I admit I’m a bit curious about what Helen is hearing in listening practice 1, Level 2, North - is that right? I don’t notice anything strange!)

I don’t know about you, but feel shaky and sick with panic when I listen to the latest Listening Practice for Level 2, so if I manage to listen through it even once without throwing up or switching it off in desperation it is a miracle. I can only pick out odd words. Perhaps I would cope with it better if I were a bit drunk?! Off out for a walk to recover from trying it again just now!

I have to admit I hadn’t listened to it for a while. I tried now and I didn’t notice any relevant difference since the last time.

But I accidentally had this page open, and I believe that listening to the practice while watching the penguin might turn it into quite a psychedelic experience!