Does anyone have any idea how i should describe my competency in welsh?

It’s in an english medium school but in a welsh speaking area.

I’ve completed all Ssiw materials to date but could do with an idea.

It’s always best to undersell and overdeliver, so I’d go for this:

…on the grounds that you’ve still got time/experience to go to reach the point where you can easily follow whatever anyone is saying in Welsh (which is the very high bar that a lot of people are thinking of when they say ‘competent’!).

Anyone who speaks Welsh with you after seeing you describe yourself as a ‘reasonable speaker’ will be pleasantly surprised (and will then tend to expect you to be better than you’ve claimed with everything else).

Aran’s suggestion sounds perfect to me (thinking back to where I was just after finishing the material). And of course your willingness to continue learning will be a positive asset as well, I’m sure. Good luck with the application! Will be keeping everything crossed…

You may want to take ‘inspiration’ from the CEF reference levels 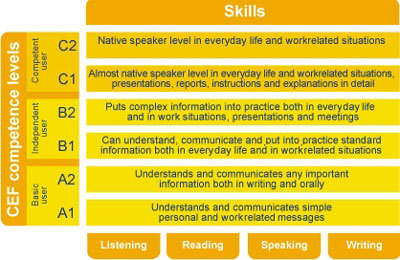 Well as it turns out, I have an interview Thursday. It’s an English speaking role so no problem there. I’m dreading meeting a fluent speaker in case i get asked anything in Welsh but if so i’m prepared!!

I am 100% sure (although I only know of your speaking ability through other people) that if you get the opportunity to speak Welsh in the interview people will be shocked and amazed at how much you’ve learned after only 10 months! If the opportunity comes up, you can say to them ‘Well, I’ve got this far, so you can see how dedicated I am to learning the language, and I’m only going to continue in this vein.’

I will be keeping everything crossed for you on Thursday. Pob lwc!

Pob lwc (and maybe you might be able to transfer sideways upwards(!) into a Welsh-speaking role in due course…).

I am sure, if you can keep calm and simply answer their questions, you will do fine. It would actually be a shame if you don’t have a chance to speak some Welsh! Do let us know how it goes!

Thank you. I do consider myself quite a blagger at times, though after 300 days of learning i must have put at least 400 -500 hours in by now of various activities …mostly Ssiw …around 200 hours i reckon…lots of radio cymru…gone from picking out the odd word to getting the gist of what it going on…tv…(llyncu geiriau, y gwyll, cegin bryn, dal ati, rygbi)…llyfrau…(y stelciwr, cysgod yn y coed, coed y brenin, bryn y crogwr)…and plenty of chat (listening) at Saith Seren, panad y sgwrs in Connahs Quay, at Flint learners, and in the wild in beddgelert, caernarfon, porthmadog, criccieth, dolgellau, betws y coed, aberdaron and yr wyddgrug…on skype with loads on here…meetups with @bassler in Stuttgart, with @philipnewton @Sam84 and @margaretnock …many conversations with myself…music…my journal…memrise, duolingo and the first mini bwtcamp including a visit to aran and catrin’s.

I’ve had plenty of laughs at my mistakes and plenty of periods of total confusion, nods of heads, shaking of heads and use of the word ‘um’.

There are far too many people to mention. Encouragement on here from loads, support through a very stressful six months and realising despite my lack of confidence speaking that people can understand me.

To everyone, many thanks. Seeing the progress of others who are “fluent” whatever that means, makes me even more determined to improve and to carry on.

Quick update on this…already in another thread.

I didn’t get the first job but secured some work until the summer. (North wales school, english medium). Thanks for the pointers.

During the lesson i welcomed the students in Welsh and was told after how lovely that was.

Great. More opportunities to practice after I start

Is it a Welsh speaking part of North Wales, would you say?

In the area as a whole the figure for speakers is 25% but the lowest town is closer to 10% and the highest 50%. School students average 40%.