I’m planning it to be as realistic as it was back in the days of the Irish potato famine, as it is a story based at that time

I trust you will cover the tragedy at Dubh Loch. A truly haunted place. 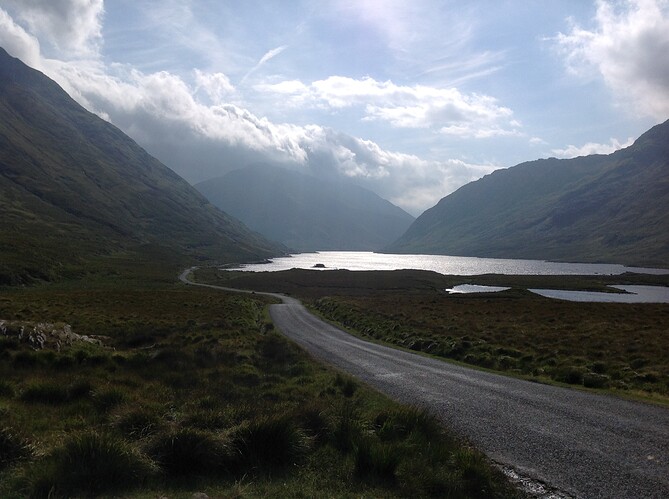 (I don’t know how to say it in Irish, so that was in Cornish. Res yw dhyn kavoes moy lyvrow skrifys yn agan yeth ynwedh — we need to have more books written in our language too.)

WHAT A BEAUTIFUL LANDSCAPE. I look forward into studying about that tragedy.

Thank you very much Courtenay. “we need to have more books written in our language too.)” Yes, I agree. Personally, I’d like to be well-known as a novelist known for writing novels in different languages and places of development, sharing the world their cultures, etc. I have many novels to write in the furture, for example, to be written in Portuguese, based in Brazil, others in Spanish based in Chile, Venezuela, etc. Now, concerning Celtic languages, for the moment I have one in Irish. As for the others, well, I’d need to expose myself entirely in their culture to grasp a very good story, which I don’t doubt there are endless great stories. I’m easy to be inspired, anyway haha Let’s see what the future has in store for me

Thank you! I took that photo about three years ago on our road trip through Ireland. There is a monument nearby in the valley commemorating those who died there.

What was the tragedy, if you don’t mind me asking (and please pardon my ignorance — I’m an Australian with no Irish connections at all)? I’ve tried Googling and can’t find anything.

I’m an Australian with no Irish connections at all)

Me too… this is what I was referring to: https://en.wikipedia.org/wiki/Doolough_Tragedy

Thanks, Louis — a horrific tragedy indeed.

Sorry to keep harping on but how’s it going with the plans for SSI(othercelticlanguages)? Me and a couple of friends are planning to start taking Irish classes in the next couple of months and a SSI course would be a fantastic help if it was up and running.

Obviously feel free to tell me to mind my own business if you’re sick of hearing this sort of stuff.

Obviously feel free to tell me to mind my own business if you’re sick of hearing this sort of stuff.

Not at all - just sick of not being able to say ‘Ta-daaa!’ and publish a bunch of new languages…

Next couple of months - nope, sorry, not going to fly - we’ve just had to take some time off the SSiBorg to do the coding for our new 6 month Welsh course - Ifan will be back on the SSiBorg in February, and I’d think we’re then two or three months away from starting the next round of beta-testing.

But fingers crossed by the end of this year we’ll be publishing quite a lot of new stuff, which I very much hope will include Irish…

Sounds good Aran. I look forward to it whenever it happens. I’d also be interested in the new welsh course!

Woudn’t be great if in 10 years or so this site could be a hub for all minoroty languages in Europe?
like Basque, Sami, Sorbian, Frisian, Mordvinian etc.
Might need some more full time employees…

That’s the dream! But as you say, we need to solve the financial side of things a bit more convincingly… I think we’re getting there, though…

Do you get EU funding? (If I may ask)

How is Irish Gaelic doing in the Republic and in the North? I’m friends with a guy who was born in Cork but who grew up in Dublin and he doesn’t speak it.

I think the newly minted Irish Free State missed a trick when it didn’t make the speaking of Irish compulsory in certain occupations. Or, at the very least, offer big financial and other incentives to promote its uptake. Not to banish the use of English, but to move towards the Welsh model. Once a critical mass in terms of numbers had been reached, incentives and/or compulsions could have been phased out.

There’s a guy called Malcolm Gladwell who’s written about so-called tipping points. Applied to the Celtic languages, this could result in a 100% bi-lingual nation.

pop up gaeltacht has been one recent success/breakthrough for Irish, but widely adopted beyond Gaeilge (Irish) to more of Gaelic diaspora, methinks

@Sebastien
If you don’t ask you don’t get. Culturlann (s) in Derry and Belfast are teaching Welsh, host Celtic music arts festivals, and
Turas/Skainos in Belfast ditto…

The funding going to this is /may be of interest (launched just this week… not language learning related so far, not yet as far as I can see…)

I need to study this thread again, forgive me. Does anyone else here follow Linda Ervine on Facebook…(and wish to let me know/share their interest in DM, etc) ?