A lot of lip service but, as far as I can see/hear, there just are not enough Irish people who really want to speak Irish (i.e. who will open their gobs and actually try to say something more than a few hackneyed phrases!). There is also one major difference between Irish and Welsh in that Irish is really quite difficult to get ‘right’. There is the ‘right’ of the official version and there is the ‘right’ of what people actually speak who grew up speaking it. If you were taught school Irish then a lot of native speakers would rather speak English to you because a. You won’t understand them. b. They think that your Irish (limited though it will be!) is somehow ‘proper’ Irish (utter nonsense of course as it is the other way around!) and that they will show themselves up by making mistakes.

If even I as a poor second-language speaker find that the pronunciation of people like me grates on my ears, I cannot imagine what it sounds like to native speakers who hear their language being mascerated

Not at all - just sick of not being able to say ‘Ta-daaa!’ and publish a bunch of new languages…

Next couple of months - nope, sorry, not going to fly - we’ve just had to take some time off the SSiBorg to do the coding for our new 6 month Welsh course - Ifan will be back on the SSiBorg in February, and I’d think we’re then two or three months away from starting the next round of beta-testing.

But fingers crossed by the end of this year we’ll be publishing quite a lot of new stuff, which I very much hope will include Irish…

Out of interest, @aran, how are things coming along with the SSiBorg and beta-testing? I realise these things take a lot of time and you have other projects on the go, as you’ve said, but SSi is such a brilliant model for language learning and I know it’ll be worth all the effort to have more courses and more languages. I wish there was something I could do to help with it, but I can at least cheer from the sidelines…

Also, talking of Irish Gaelic, maybe one day we could have SSi Scottish Gaelic too? I found out recently that in the Outer Hebrides in particular — a place I’d love to visit some time — it’s estimated that up to 50% of people speak Gaelic to some extent. It’d be wonderful, if I do go there, to at least be able to exchange greetings and simple conversations in the language!

(And also, because in both Irish and Scottish Gaelic it’s famously near impossible (for English speakers, anyway) to figure out the pronunciation from the spelling, an audio-based course like SSi would be really, really, really helpful…)

(And also, because in both Irish and Scottish Gaelic it’s famously near impossible (for English speakers, anyway) to figure out the pronunciation from the spelling, an audio-based course like SSi would be really, really, really helpful…)

I think that there will need to be at least three versions of Irish, plus two more for Rathlin Island Irish alone.

Is Irish really so different as to be unintelligeble from one place to the next?
It’s like that with Platt a bit. My Grandma came from Hallenberg and my Granddad came from Züschen. Less than 10 miles apart yet the dialects were compleatly different. (not that I can speak either unfortunatly)

I admit to my comments re Rathlin Island being a bit tongue in cheek, but there are quite big differences in grammatical construction, preferred ways of expressing ideas, and pronunciation of individual words between and within dialects and accents. In the soap opera Ros na Rún there are three versions of the dialogue to follow - the English subtitled “version”, Irish subtitles, and then what is actually said/spoken by the actors!

If you use the pronunciation files for words available in the excellent online dictionaries you will find that some few but significant words are so differently pronounced between Ulster, Munster and Connaught dialects as to be very hard to recognise/reconcile.

I found it hard, being taught as I was by Mayo man (a dialect/accent not a million miles from Ulster), that when using an Ulster dialect audio-visual course I became unsure how to decide how to “choose a pronunciation” for the ‘reading voice in my head’ (so to speak). I’m still somewhat confused…

The youngsters from all over Ireland going to “Lurgan summer college” in Connemara can get access to an orientation course (Coláiste Lurgan’s Oide app - even you can sign in as as a guest and try it out) in advance of going there to that part of Connemara where they’ll be staying with local families, to attune their ears to the local ‘blas’. That blas/their own local flavour means a lot to many population-wise fragile communities within a Gaeltacht. Some feel that school-taught Irish runs rough-shod over genuine Irish as spoken by native speakers, which does/did still abound in local variation and codes.

Hochdeutsch and Platt is an interesting analogy, but the Irish equivalent to Hochdeutsch, the CO has a much shorter history, being a 20th Century invention, I think. I must admit that all the above is my impression as a beginner to intermediate learner, and I am certainly no expert!

Very interesting to hear about the different Irish dialects — in Cornish, because it was essentially dead as a spoken language for over 100 years, we don’t have any older traditional speakers to tell us that the way it’s taught in schools, or the way these young people speak nowadays, isn’t “the real” language…

But at least we do what we can with it. I do think it’s important to preserve local dialects and variations where they still exist, but for any endangered language, a reconstructed or standardised version is better than none at all, I guess.

Another big motivation for an Irish course, is that it has much interest from around the world … it would bring in a decent income…daresay the most of all courses

Income only after a big outlay… and after competing in a well (I mean well in terms of sheer quantity) supplied market, in which many including a government or two are heavily invested… I think SSi is hugely complementary to all that currently exists and would raise the standard achieved by all those involved in courses to which SSi “graduates” move on, but that in itself poses new sorts of challenges… Anyone who understands what SSi does and loves Irish will welcome all that follows on, but there’ll be fear, misunderstandings and resistance around, probably inevitably, which is a great motivator to me to build on my SSi acquired Welsh and be impressively and ever more accurately & authentically fluent in that first.

Depends on where you are in Mayo really…as to whether it has an Ulster influence (Achill did because of immigration from Donegal and most likely some other places where ‘Ultachs’ settled) but in general the accents are still a fair distance apart. There would once have been a continuum all down through the country interrupted by lakes, bogs, mountains etc (as in Wales). Thanks for the ref to Coláiste Lurgan’s app. I didn’t know about that and would be interested to hear what they focussed on. Lots of people are a bit antagonistic towards the Caighdeán but a vast amount of scholarly work went into seeking agreement between the dialects and texts for a standard form and without it the dialects themselves might not have survived. Had Irish survived as the main language of all of Ireland then there would have been a standard along with all the dialects - Just because one exists does not mean that dialects disappear. I saw a post on FB yesterday about people interested in Mayo dialect - something I’d like to know more about myself as my Mom’s side is entirely ‘Mayo’ and my partner’s Dad once spoke a Mayo dialect. You might find this interesting (the guy speaking is ‘Darren Oregon’ on Facebook and I’m sure he would be happy to be followed by anyone learning Mayo Irish - He’s a ‘friend of a friend’ and he learned most of his dialectal Irish in North Mayo). https://www.youtube.com/watch?v=BR4g8NafXeE

Thanks @Dyrvig! Little links and discussions like these help keep my interest and connection and bits of what I have learnt in Irish alive even as I neglect it in favour of Welsh from more or less scratch on the 6mws.

My Irish teacher had learnt his Irish on Achill Island, and we were using as a starter course “Irish is Fun!” which had a definite Ulster tendency, though unfortunately its illustrations were most off-putting to most women and a fair few men who ventured into the class…

I struggle to accept the Ulster, particularly Derry, (into which I emerged as newborn, and whence I came to England, and whose accent otherwise feels natural), pronunciation of á, and yet generally the “vague impression of pronunciation” in my head is Ulster-influenced. I “oo” for most endings where a Munster person would be producing a different vowel and a consonant or two… e.g. in noun endings like -adh, -amh, etc in words of more than one syllable…

Out of interest, @aran, how are things coming along with the SSiBorg and beta-testing?

We’ve basically had to steal all Ifan’s time for the six month course (and related stuff) this year, but he is on the verge of being back on the SSiBorg, so the next steps should be a ‘new year’ kind of thing…

Do note how he is not mentioning the year.

You can add me to the list of interest in SaySomethingInIrish. I actually found the courses on both BBC N.Ireland, RTE and Raidio Failte quite difficult. However the free bits of the (Scottish) Gaelic course based on (Irish) Buntus Cainte I found to be ok to follow.

When I learned Welsh, I had to learn to open my mouth to speak. But Irish, from my scant experiences, seems to be the opposite, ie a closed mouth language spoken with minimal movement of the lips. Just something I observed.

Being far too enthusiastic about all this, I’ve just decided to check out Raidio Failte and found that this course is almost like SSi but in reverse - they say the Irish, then a gap, before you then hear the same in English, so the opposite way around!

A bad experience? The Jonathan Swift was not swift, but still gave you a Gulliver’s experience of travels, while whispering modest proposals in your ear?

I am very sad to hear it. You do not deserve such cruelty. I hope it is the first and last bad experience you suffer on a ferry, anywhere.

Problems in June and April this year: 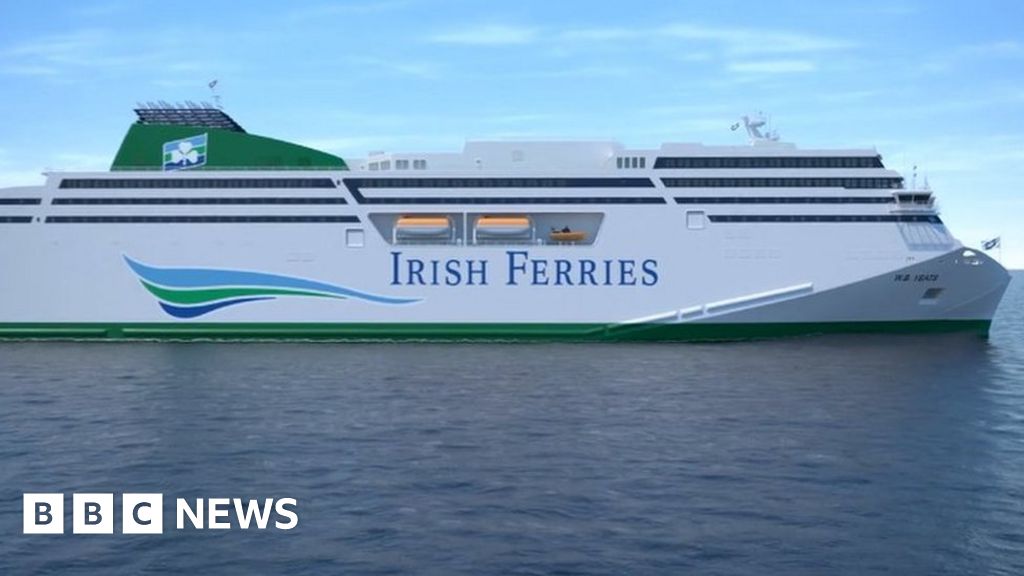 19,000 people have been affected after Irish Ferries cancelled 6,000 bookings due to its new ship being delayed.

I would point you at my running commentary on Twitter, but I’m afraid it’s rather sweary…