Does anyone know Tomos Terfel - the 38 millionth visitor of the Postojna cave?

Yes, this is the question.

I’ve read yesterday that Postojna cave, about which we (well I) had “talked” in relationship of visits of SSiWers in Slovenia a lot, has got its 38 millionth visitor yesterday (or maybe the day before, not sure) and how lovely to hear the 38 millionth visitor was Welshman named Tomos Terfel who visited Slovenia with his girl for the first time. For his “acheavement” he’s got a prize of course - he gave his signiture to the “Golden book” of visitors of Postojna cave and has got the weekend stay in Cerkno (the lovely skiing and touristic resort in Notranjsko region) which guilts for both of course, him and his girl. The Welshman visit to Slovenia was birthday gift from his girl so she’s partly “guilty” for the occassikon and prize.

I’m just sorry I never am at the right time on the right place so the surprise would be even bigger (they did a surprise event in the concert hall for them both after the tour of the cave) if someone from the host country would greet them both in Welsh. I hope Tomos speaks at least some Welsh of course and if he doesn’t I’d hope to ispire him to learn.

I’d really like to know if there’s a chance someone on here knows the lad so I’m posting the link to the picture from that occassion when he is signing the “Golden book”. 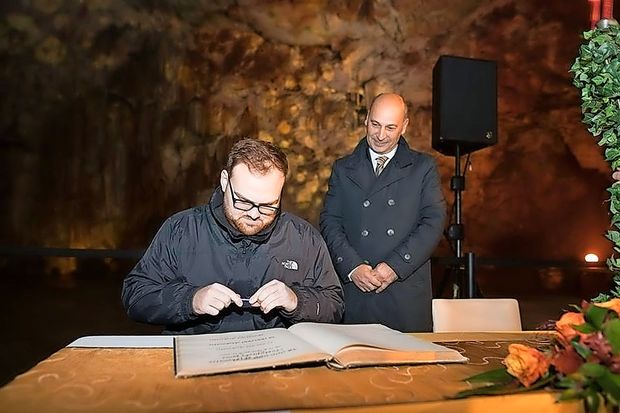 He’s certainly got a son called Tomos (his eldest) who’d be about in his mid-twenties now.

Bryn T. Jones’? - This one Bryn? https://twitter.com/Bryn_Terfel He tweets about son Tomos but not about this occassion (yet).

Not yet, but I might ask him. He speaks Welsh so I presume his son does too. I’m a bit excited so I have to calm down first. And besides, when I find all the strings Tomos will be already back to Wales I presume.

Bryn’s a lovely bloke, I doubt he’d mind you asking

(especially if you do it in Welsh!

(especially if you do it in Welsh!

It’s out of question I wouldn’t do it in Welsh! Diolch.

I believe I’ll really do this tomorrow (err … today) some time during the day. It’s not every day that Welshman just comes to Slovenia and becomes famous on his 2nd day of his trip around the country.

The artilcle about him being 38 millionth visitor of Postojna cave went viral in Slovenia and it was (probably) published in printed media aswell. I wouldn’t be surprised if the media house where I’m working would publish an interview with him in one of our magaznes next week or so.

You do know that Tomos’s dad is very, very famous?? I’m amazed the publicity about the Cave visit didn’t say, “Son of the famous Welsh opera singer…”!!! When your magazine finds you are chatting with someone who has performed in USA (many times), Belgium, Austria (Vienna State Opera), Paris, La Scale Milan etc. they’ll beg you to write something! If he does answer, I guess you need to ask if he minds you pointing out that the 38,000,000th visitor to the cave was Bryn Terfel’s son, because if you do, they’ll be begging him to come and sing there!

Or even Syr Bryn Terfel…?

Or even Syr Bryn Terfel…?

Wps! I was too quick then. I didn’t name him Sir but just put polite Ga i cwestiwn (which turned to cuestiwn

… ) and then the question if Tomos, his son is the one being 38 millionth visitor.

You do know that Tomos’s dad is very, very famous??

To be honest, I didn’t hear about Sir Bryn Terfel Jones before this occassion at all and I certainly didn’t know that he’s famous and honoured person. So, it might be asking the question wasn’t too bright idea as I’m almost 100 % sure I’ll get no answer as I’m too little human being for one such person to deal with in any matter.

Some research done, it shows he never performed in my little country. Might be he isn’t too well known here outside opera or classic musical circles so this might be the reason they didn’t mention this.

It’s also known that many famous people come to visit my little country mostly because they can avoid publicity and being followed on their every step they take touring our country. So it might also be it was the request of Tomos’ father or Tomos himself not to mention this fact for avoiding too much publicity. His girl’s name also isn’t mentioned anywhere so I really assume this was the reason.

I also didn’t see even one single Britain’s or Welsh media would report about this occassion and Sir Bryn didn’t write anything anywhere, neither on his twitter nor on his Facebook page, so this might be it.

When your magazine finds you are chatting with someone who has performed in USA (many times), Belgium, Austria (Vienna State Opera), Paris, La Scale Milan etc. they’ll beg you to write something!

Don’t be overwhelmed, @henddraig. Poeple from the media house I’m working at, NEVER asked me to write anything no matter how important poeple I might meet and here I strongly believe it will be no different. They have their journalists to do the job. The article about me was once in one of our magazines but to be honest probably just because the journalist who has written about me liked me a lot and there were holidays at the doorstep and might be there was still some empty space to squeze the interview with me in.

And there’s also the fact that no one in our country (except of some of my co-workers) is interested in someone speaking Welsh so it might be if I’d be there in Postojna, they wouldn’t even let me say “Croeso yn Slofenia.” to such special guest let alone having some more chat in Welsh with him.

Don’t worry Tatjana, unless he’s changed drastically (I met him a number of years ago) - and I very much doubt he has - he won’t be precious about it, and I dare say will be chuffed that you wrote in Welsh

I have never met Sir Bryn, but I would be very, very surpirised if he would be anything but warm and friendly! I have seen and heard him on TV and he is clearly a naturally warm friendly person . He may be so busy he just can’t respond to tweets, but if your paths crossed at, say, an Eisteddfod, and someone said, “Dyma Tatjana o Slofenia. Mae hi wedi dysgu Cymraeg!” He’d react with as much awed pleasure as the rest of us!

Bryn is also part of @ali’s family since he married her niece, so she may recognise Tomos from the photo.

Well, I thought I’d let you know that I’ve got the answer from Sir Bryn T. Jones who confirmed that it was his son who was the 38 millionth visitor of the Postojna Cave. He also told me that his son and his girl had magnificent time in Slovenia.

So thank you @aran and @siaronjames for quickly jumping in and lead me to the right track so I could happily solve the “mystery” of 38.000.000th visitor.

I am really glad he was Welshman who claimed the prize and somehow established that if not Slovenia in whole, the Postojna cave is more and more connected to Wales and its people.

At the end even Postojna Cave staff jumped into conversation which I and Sir Terfel Jones lead totally in Cymraeg saying that with the help of Google Translate they could follow the conversation and warmly invited the cupple back at one point (in English of course). I’ve used the opportunity and invited them to learn Cymraeg with us here so … you never know what comes next.

Thank you Sir Bryne T Jones for your kind replies and likes on twitter aswell.