A lavish, star-studded update of Dylan Thomas’ play for voices, Under Milk Wood. The inner lives of the residents of Llareggub are revealed as they pine for old loves and relive past triumphs.

This looks great! But I think we’re supposed to be going to a concert at the Music College that night … why does everything always happen on the same night?!

Sold out I see.
Hope it makes it to DVD one day.

Hope anyone who goes lets us know how it went.

it’ll be on S4C on Christmas Day, if that’s any help?

Looks like it might be the 27th rather than Christmas Day. I just found this press release:

The film will then screen on S4C at 21:00 on 27th December. The Welsh
broadcaster co-financed the project in partnership with Ffilm Cymru
Wales and Goldfinch Pictures, with fFatti fFilms producing.

Adapted into Welsh by T. James Jones, and with a screenplay by Murray
Lachlan Young, Michael Breen and director Kevin Allen, Dan Y Wenallt
explores the rich imagery of Thomas’ dreamlike verse. Allen notes of his
visceral and visual interpretation “I was determined to craft a
cinematic rendition that challenged the common perception; that poetry
should remain in the domain of the reader.”

This is the first cinematic dramatization of Thomas’ text since
Richard Burton’s 1972 version, and it will truly bring the Welsh poet’s
legacy into the 21st Century on the 100th anniversary of his birth.

Dan Y Wenallt will premiere on December 11th at Cardiff’s Chapter
Arts Centre and will open simultaneously in cinemas and arts centres
across Wales.

Shot back-to-back with Dan Y Wenallt, an English-language version,
Under Milk Wood, will be released in UK cinemas in Spring 2015.

Thanks, Dee! I was going with half-remembered information from reading Lingo Newydd the other day … I think the press release is probably a tad more authoritative!

Dug around to find: 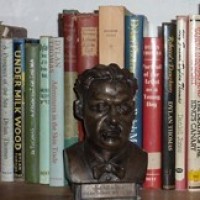 Hope it really does get shown in England as well. I might try asking our local “art house” type cinema if they will show it.

I saw it in Monmouth (Trefynwy) last night. Unfortunately it was shown to a very small audience because it had not been widely advertised.
I enjoyed it although it was not as I expected. The photography was excellent and Organ Morgan was incredible. Like many films now there was more obvious sex than the book seemed to show. However, overall I would like to watch it again. There was little need to use the sub-titles but as they were rather small it didn’t really matter.