From time to time Cymdeithas yr Iaith hold weekends in different locations around Wales where Welsh learners can use their Welsh with new people, socialise, and learn something about the activities of the society as well. This one is coming up in Caerdydd. Note that it’s not for absolute beginners, but if you have had a few conversations and you feel confident, that should be fine.

It will be held from Friday 27 to Sunday 29 October, staying in the Nos Da and includes bed & breakfast, activities and games. Booking details on the poster below. 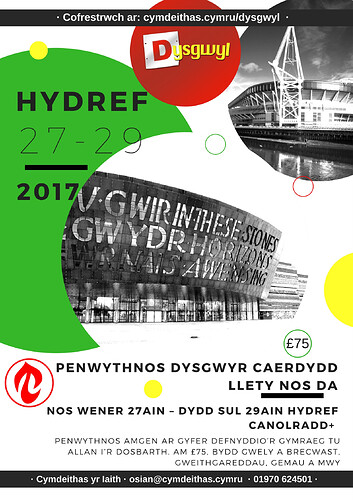 I’m going to the one in Bethesda next week

I wonder if they will be OK with people wanting to take part, but without the Bed & Breakfast? Liiving and working in the area, this won’t be needed!

It’s worth asking them. I asked the same question when they held a weekend in Tresaith, and they were happy for me to join them when I could.

I’m going to the one in Bethesda next week

Be sure to report back!

I’m thinking of going to the Cardiff one. Just enquired and there are still spaces at the moment.
Never been to Cardiff properly, so it seems a good opportunity (if the missus will grant me a gate pass…

). (And it’s not too far from where I live (in England) by train (whereas most places in the north are a pain to get to from here by train). Tentatively opening negotiations …

I’m not sure what to expect really. I’m just going to turn up and go with the flow. Good luck with the negotiations

Just remembered that I promised @mikeellwood that I would report back about the Penwythnos Dysgwyr I went to in Bethesda last weekend.
It was a great weekend and very well thought out with lots of interesting and fun activities throughout the weekend. There were a great bunch of people there and it was a pleasure meeting them all. There were learners from the Wrexham area , Pembrokeshire and one from England. I think that they were hoping that a few more would have come. The people from Cymdiethas Yr Iaith , who organised the weekend were brilliant and very encouraging and helpful .
When we arrived we were treated to a lovely vegetable curry and we all sat round and introduced ourselves . When it came to my turn all that came out of my mouth was ,“Sam ydw i. Dwi’n alchaholic” which had people laughing

. We played games , had a drink and a good laugh that evening. A lady also came to give us a talk about how she made yogurt and cheese out of sheep’s milk and we got to try lots of free samples .
The next day , after breakfast , we had fun making metallic cards (I can’t think of what they are called) and then we went out for lunch in a local cafe . After that we went for a tour of the hydro electricity works on the river Ogwen which the locals had all paid for themselves . I struggled to understand a lot of what was said but still managed to ask a couple of questions . After that we went to a shop which had turned in to a pub , selling the local Ogwen beer. What an amazing place ! The atmosphere was great. There was a hog roast and music outside . We were there for 2/3 hours. The place was packed and I was quite taken aback by the fact that I didn’t hear a single word of English spoken the whole time I was there . It was the same around the streets of Bethesda where we heard almost 100% cymraeg spoken all weekend , making Bethesda a brilliant place to hold this sort of thing . I even got introduced to some people off s4c that I recognised and had a nice chat with them . After that we went for a nice walk and then we all went to an Indian restaurant in the village for a nice and affordable meal . After that we went back to where we were staying for another beer and a quiz .
Next day we had a short talk about Cymdiethas yr Iaith and then went to visit the farm shop of the lady who had given us a talk about the cheeses on Friday night before heading home. The planned picnic was cancelled due to the weather.
I would definitely recommend going. The weekend was fun and very well planned . They said that the upcoming one in Caerdydd is likely to be very different but equally as good.

Sounds great. I really wanted to go but found out about it too late to get animal sitters! Hopefully next time.

There are five places still available on the weekend in Caerdydd, so not too late to book!