Connections with other languages

I remembered now that i think that someone had probably posted a link to a webpage with a list of Welsh words with Latin origin before in this Forum, but I can’t find it.

However I searched now and found this. Maybe @aran can start his mini-dictionary from here.

Oh so many more I had sort of felt as familiar and can recognize now!

was it this link?

I was reading today that the original parent celtic language probably originated about 4000BC, so I guess we have to consider borrowings as things that occurred in both directions.

Yeah, I guess that’s the one.

And right, we shouldn’t forget influences in the opposite direction!

For really early stuff it’s often going to be difficult to distinguish between borrowings and shared inheritance from an even earlier stage, but I think both English ‘cat’ and ‘car’ are reckoned to come from Celtic words borrowed into Latin; and English ‘rich’ comes directly from Celtic rix/rig- ‘king’, as the -i- sound is the wrong vowel for it to be either original in Germanic or borrowed from Latin rex.

While some others, like cynnwys and terfyn, do give a hint if you hear them, more than when you see them. 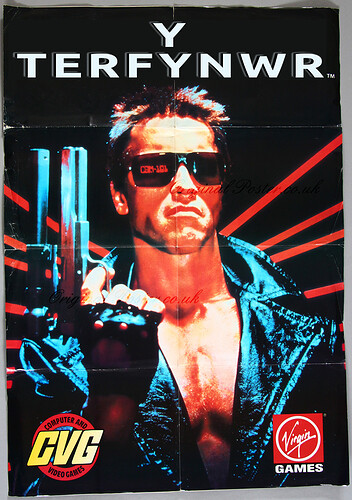 I guess chariot racing - leading ultimately to its reincarnations as car, carriage etc was “the” sport - the romans loved it and the celtic speaking lot were supposedly equally obsessed and renowned for being good at it. A common shared sporting interest and a shared vocabulary?

So would his catchphrase be “Bydda i yn ôl!”?

Alright it does sound different than Terminator. However, it still sound badass enough to me!

Then, about Latin…don’t forget that the sound of “e” and “r” in Welsh is like Italian not like English, and that’s actually enough for me to hear echoes of termine and terminus in terfynwr.

Should check @Novem’s impression, too - since we were talking with her about surprising similarities of sounds between the two languages before.

I don’t know enough about Italic (Latin and related languages like Oscan and Umbrian) to know how we’re supposed to tell that carrus was borrowed into Latin, rather than a shared inheritance, but if I remember correctly it is supposed to have been borrowed. Maybe it was originally a technical term for a particularly Celtic style of vehicle – like calling something a landau or a cabriolet?

Oh, I didn’t mean to tell you it didn’t sound reminiscent of termine – and more so of that, than it does in English – just that (with appropriate graphics) maybe it looks a bit like it, too

Nor me - a lot of people seem to say that carrus was borrowed for whatever that means, but as you say it may have been already present in the same common language - i. e. the hypothesised Proto-Italo-Celtic languages (or perhaps more simply just celtic, before Italic split away), which purportedly existed long after the other families, Germanic, Slavic etc had diverged. All conjecture I guess.

Yes, if you go back to English texts about 1815 or so you find the word determine routinely used to mean “decide”

Hmm - not sure. Dutch ‘rijk’ meaning ‘rich’ - and identical allowing for English sound shift - is unlikely to have come from Celtic; Wiktionary says there is a common early IE root origin for Celtic and Germanic. But who really knows

Yesterday I saw a clip on s4c where I could see they were talking about a place in Northern Wales and the sea but they kept on saying what I heard as biscotti - that’s Italian for cookies.

Until I realized it was actually pyscod/pyscodyn (maybe also with mutation, I don’t know).

So, latin origin is great but sometimes it’s not that easy to spot!

I’ll have to chase it up - I can’t lay my hands on it right now, and it’s possible reconstructions have changed, but I understood that it was already in Primitive Germanic with a long -i- (shortened later in English) & that that was the wrong vowel for it to be a shared inherited form, but the right one if it was borrowed from Celtic.
ETA: Couldn’t find it in print at home, but then checked online, & Wiktionary has an entry for rīks which says it’s an “early borrowing from Proto-Celtic *rīxs.”

pysgod is supposed to be a Latin borrowing though from piscatus-I think there’s a link to the star sign pisces in there as well.

Yes!
What I meant is mostly that some words are very easy to guess for me when I see them because they look almost exactly like Italian or Latin and, usually, they’re also very recognizable when I hear them.

But not with a strong Northern accent because all of a sudden they remind a different Italian word or even become Finnish!

I like the way you are associating words by sound, because you could easily spot connections that are not obvious to someone like myself, brought up as an English speaker, with little knowledge of Italian.

Just a couple more as I was reading tonight:

And in German, it’s “reich”, which on paper, looks even closer; less obvious in the spoken form.