Connections with other languages

Every once in a while I come across a word in Welsh – sometimes one I’ve come across before a number of times, sometimes one wholly new to me – and I have a sudden “aha!” moment where I realize (or suspect, and then check in the GPC) how it’s actually connected with words in English or other European languages.

So with that caveat, here goes. The one that struck me the other day was stumbling across a berf annherfynol or annherfynedig (translated as an ‘infinitive verb’) when I was looking for something else in the GPC. And I wondered how on earth you could get annherfynedig to mean ‘infinitive’ – and then I clicked…

So nherfyn must be a nasal mutation of some word terfyn, which turns out to be a perfectly good Welsh word for a boundary, limit, or end – borrowed from Latin terminus as in, well, ‘terminus’, ‘terminal’, ‘terminator’, you name it. The -m- in the middle has changed to an -f-, but we can cope with that, because it’s just like a soft mutation; and the ending’s been lost, but that’s pretty much all.

Another Latin word for an end or boundary was finis, so a lot of the English words that correspond to terfyn words turn out to have fini in them – like ‘infinitive’, or the one I could never remember when so many SSiWers got through to the rownd derfynol (final round) of Dysgwr y Blwyddyn – terfynydd ‘finalist’. I think I’m going to remember that one, now.

And then, as I was writing this, another one hit me: what about penderfynu? And yes, according to the GPC, there’s a verb terfynu that means ‘to terminate, finish, determine’ – and so penderfynu ‘decide’ is really just ‘determining your head’

which turns out to be a perfectly good Welsh word for a boundary, limit, or end

One of the words I wondered about was “dyfalu” (to guess). I wondered if it had any connection to the French “deviner” or, indeed, the English “to divine”, but I can’t find any etymology online.

which turns out to be a perfectly good Welsh word for a boundary, limit, or end

Funny you should say that… a friend of mine posted this on Facebook after her holiday in Gog country: 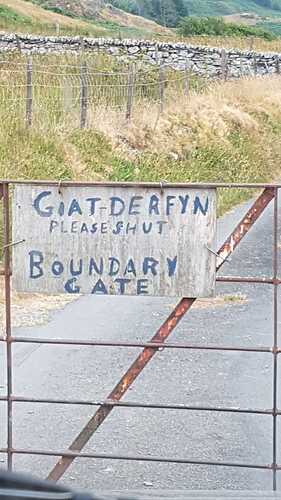 I’ve wondered about that one, too – it sounds kind of alike, but maybe not quite enough alike. According to the GPC, though, the dy- is a prefix, and the fal bit is related to fel ‘like, as’ – as in Mae o’n gweithio fel athro ‘He works as a teacher’ etc. So apparently not – although I have now had to add fel to my list

Sports enthusiasts may be familiar with the term rownd terfynol - the terminal round of a cup competition, known in English as a final.

Oh, similar to Italian - then I would guess Latin - there’s so many more than I expected!

Ooh, that’s nice – between Catalan and half-remembered Latin, most of those were familiar to me – but it had never occurred to me that ystafell was from the same source as English ‘stable’ (according to the GPC – stabellum, weak form of stabulum).

is nice, too – from the source of English ‘patella’ and ‘paella’

Ooh, I love this - I keep thinking it would be great to have a mini-dictionary of Welsh words that are obvious/easy to Italian/French/Spanish speakers… but at least half of these are new to me…

Ooh, I know, I know - braich and coes

I can take note, when I find them (or remember more) and add them here.

For now I had just taken note of some false friends that are often quite hilarious (by the way I can post some here too, just for fun)

More seriously…the Latinish words really help me a lot, when listening to radio or TV, to understand the topics!
Then if you add actual English words that people often use, and English-sounding or Welshicized…Welshified English…well whatever, you know what I mean…there’s a whole lot of words that can be identified pretty easily - that’s great!

Ooh, I know, I know - braich and coes

Really?Let me check what they mean…
oh right, now I know what they mean in Welsh, I can guess the origin - but they sound really different from Italian so it was hard to guess (I’m not such a big expert of Latin).

What does patella mean in English, by the way? I’ve never heard it before.

‘Patella’ is borrowed direct from Latin to mean the bone of the knee-cap, which is a sort of shallow bowl-shape of bone
Isn’t braich something like bracchio in Italian? (French, Catalan bras, like English ‘embrace’, ‘vambrace’ ‘bracelet’).
I don’t know about coes in Italian, and to be honest I checked the etymology in the GPC before posting, but I was thinking of Portuguese coxa and French cuisse ‘thigh’. (It helped a bit that I’d got the Portuguese wrong in my head - I’ve always thought it was coixa, which would sound more like coes – but it isn’t

Patella then in Italian is rotula. Probably a doctor would have known!
Oh by the way, here’s another Italian-Latin one I remembered: Meddyg!

Patella in Italian is actually a sort of tiny clam that you can spot on rocks in the sea - but for some reason I thought it wouldn’t be the same in English.

Above the patella, in a coes, you have the coscia, in fact - that’s Italian for thigh.

But just like braccio the link to braich to an Italian ear is not that obvious - because it’s got that soft “c” and Welsh “ch” is really different and so are “es” and “scia”!

And just for a laugh, here’s a bunch of funny false friends - although skipping the naughty ones, that are actually quite a few, especially if you consider dialects and regional pronunciation variants!

[In brackets, the actual Italian words that I mistakenly heard or that it reminds me]

And if you ever wondered why some Welsh+Italian romantic moments didn’t work too well
cariad, cariadon = with a cavity (cariato)

I know of two books that detail the influence of Latin in Welsh: ‘The Latin Element in Welsh’, 1908, Samuel James Evans, and ‘Yr Elfen Ladin yn yr Iaith Gymraeg’, 1943, Henry Lewis. They both contain lists of loan words, of which there are hundreds, and also an explanation of the sound shifts. Some surprising, e.g. ‘cynnwys’ from ‘condens-’, although upon reflection, it makes sense, others like ‘ffa’ from ‘faba’ quite normal really

to an Italian ear is not that obvious

and also an explanation of the sound shifts

cynnwys from ‘condens-’ would never have occurred to me; but yes, I’m thinking particularly about the slightly less obvious ones – not so recherché that you have to go out and get yourself a degree in Comparative Celtic Philology, but the sort of ones that are maybe only obvious after you’ve made the connection. And not just Latin borrowings, although I think that’s going to be the main source of recognizable roots.

How about llyfrgell for book-cell, for another?

and also an explanation of the sound shifts

cynnwys from ‘condens-’ would never have occurred to me;
How about llyfrgell for book-cell, for another?

Well, some words are more recognizable in written form, like llaeth or llyfrau and related - that look almost the same but do not sound like their latin cousins at all.

While some others, like cynnwys and terfyn, do give a hint if you hear them, more than when you see them.

As for ffa…well…sure it can be connected to fava (fava bean) and also fagiolo/faseolus/phaseolus (bean) and fagiolino (green bean) too, but it’s basically just a syllable and so many other words begin with fa…