Community pub reopening in Nefyn - Can you support The Sportsman / Yr Heliwr?

The Sportsman (Yr Heliwr) pub in Nefyn (Pen Llyn) has been closed for a year or two now, but there are plans afoot to reopen it as a community pub. There is an initial share offer with shares at £50 apiece about to open, and you can get more information about the offer at the web address below, and buy a share or two if you can afford it. The group working to reopen it seem to be modelling their ideas on the Pengwern community pub in Llan Ffestiniog, but the idea is very similar to the Llety Arall project in Caernarfon. There will be an information stall in the Nefyn Show on 7th May, for anyone who happens to be or to live in the area on that date.

I’ve tried and failed to upload the fersiwn Cymraeg of the share offer, but I hope the English version will now appear below: 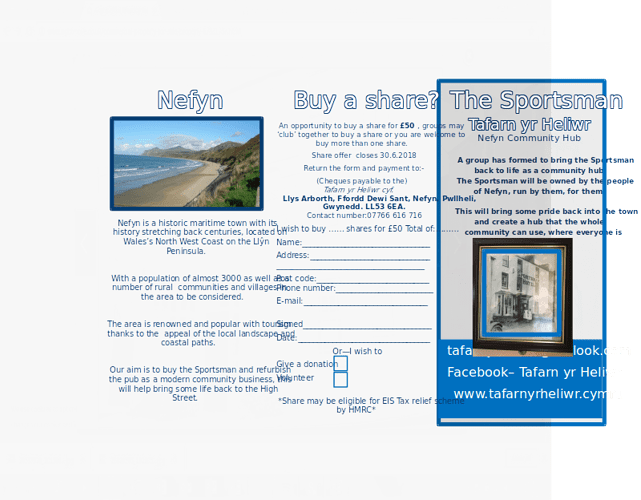 In case it’s not clear enough from the text above, the address for further info or to purchase shares is:

and the email address is:

Feel free to write in English or Welsh, of course!

Good luck with this. I’ve been concerned for years with the growing numbers of lost pubs (wherever, not just in Wales; we’ve lost loads around here, and are still losing them).

A community pub seems a great way of saving at least some of them. Although a lot of work I imagine.

Thanks Mike. Yes, I went to Trefor the other night for a drink with a friend, only to find that Clwb y Twr was closed, and we combed the coast as far as Dinas Dinlle till we found a place that could serve us a beer. There seems to be a lot of support in Nefyn for reopening the Sportsman, and the initial meeting pretty much filled the village hall, so I think there’ll be enough volunteers to staff it. I just wonder whether there’ll be enough people in the area to raise the cash to buy it. If you compare the number of people in the Caernarfon area, where they raised £140000 to buy the Llety Arall premises, roughly the amount it’ll cost to buy the Sportsman, with the population of Nefyn and district, it looks like a bit of a mountain to climb, particularly given the relatively low income levels in the area. But it’s early days yet - let’s see what the Nefyn Show brings.

Good luck from me too! I’m intrigued though that the model seems to be Pengwern community pub (which I don’t know) rather than the Vic in Llithfaen just down the road from Nefyn - are there big differences in approach between the two?

I’ve received PDF versions of the support forms now so I’ll see if I can post them here. The first one is the English version, and the second one the Welsh version.

I’ll put a link to this thread in next week’s email so that people can download the forms from here.

All the detail – including information about financial rewards – is in our share offer document here. If you want to buy shares, please email us at tafarnyrheliwr@outlook.com. We launched the commu…

We have big plans for the Sportsman……. And you can help us make it happen. To buy shares: 1) Download the share application form here. 2) Read the share offer document with all the lega…


I notice from the plan that there’s no Welsh for en-suite, so they’ve had to borrow the English…

Yes, I don’t know the Pengwern either, though it’s only 40 miles from Nefyn, but they seem to be looking around at anywhere with a similar approach, the Fic and Llety Arall included. And Myrddin ap D, who seems to be the leading light in the Fic, was at the public meeting, though I think he kept quiet throughout.(Wouldn’t you, in his place?) I suspect the Pengwern is very much on the same lines as the Fic anyway. The local businessmen, such as they are, were very much in evidence at the meeting, which may lead to a difference of emphasis: I think it’s important to insist on the predominantly Welsh-language character of the place and the pub, though, and not have it end up as just another nondescript tourist venue (perhaps unlikely in Nefyn?).

Thanks Rob. I must admit I hadn’t clocked the web page.There’s a facebook page too, if you use that stuff:

The Tafarn yr Heliwr community pub project is seeking votes in support of its application for a grant from the Calor Rural Community Fund - here are the details if you want to vote:

Many thanks for the heads up, John - I’d got the message from the Heliwr, but forgotten to do it. Worth pointing out, in case anyone else (like all those people who use the Saith Seren and are supported by people like us!!) is willing to take the trouble, at no cost to themselves, to fill in the Calor form and help us out here in Nefyn, that each person has TEN votes and you can give the lot to the Sportsman pub.

A nice feature of the folk helping out with rehabilitating the Sportsman is that there are quite a few younger people involved - kids still in school, etc.- which bodes well for the future. And the work is coming on apace, so it should soon be another really good meeting-place with an almost entirely and naturally Welsh-speaking clientele.
Anyone willing to take the time to vote for the Calor grant of 5000 quid would be doing us a big favour - the whole of Pen Llyn has only a population of around 14,000 so we are lagging somewhat in the race for the 5000 pounds. It’s a bit of a faff, because you have to open a Calor account (purely a technical thing, no need to sign up for gas or receive Calor’s sales bumph!), but it costs nothing except your time, so PLEASE HELP! See John Williams’s post above for details, and thanks again, John!

you have to open a Calor account (purely a technical thing, no need to sign up for gas or receive Calor’s sales bumph!)

Yes, I can confirm that - I did it a while back but there’s been no subsequent contact by Calor, so no need for worries on that score!

Let us know when you’re around, John - maybe we could have a beer.

Looking forward to a beer when it opens

Maybe it’s time for an update on the Sportsman/Yr Heliwr. They did get the Calor Gas $5000, so many thanks to everyone who took the trouble to vote for it. Work seems to have slowed down this year after the initial enthusiasm, so it’s been once a month rather than once a week for volunteering, and the last morning this year for volunteering will be this Sunday (10-1 00 or any part of that) but we are looking forward to “having the builders in” in the new year, so things should move on apace. So far there’s been plenty of crass labouring work on the volunteering days, so no need for any special skills, and so far I haven’t heard any English spoken, so that augurs well for the future. Distance from the 2021 Eisteddfod? About 5 miles.

Sorry to mention this, but: 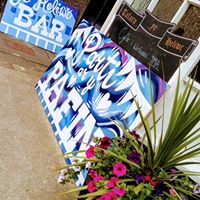 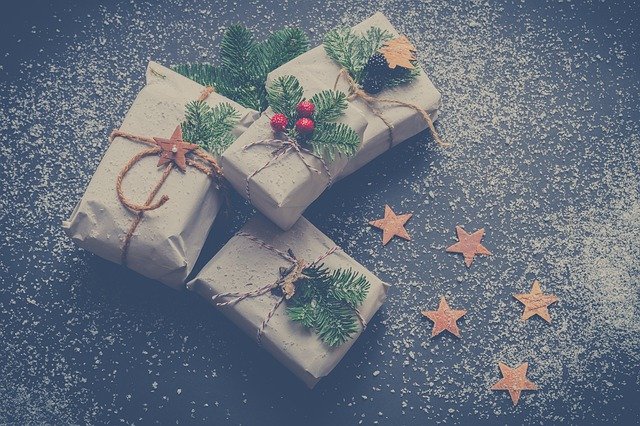 Do you know anyone that missed out on a share first time around? How about buying them one for Christmas? Click here for a form.

Any shares received during or second share offer will go towards bringing life back into this old building.

Want to be a part of the venture but don’t want to attend committee meetings?
Want to be part of local events, gigs and volunteering sessions?