Blow me down with a feather

Looking up ‘flexible’ in my super duper newish Geiriadur threw up hyblyg and… YSTWYTH.

My goodness. It got me thinking, ‘winding’ but it is shown as dolennog as is ‘meandering’.

Remarkable. I wonder what the etymology of this word is ?

A local village near to us in West Wales is called Boncath. This dictionary has it as bwncath = buzzard.

This magical language is true privilege to learn.

There is a river in west Wales called Afon Ystwyth - the meandering river. The town of Aberystwyth is on the mouth of the Ystwyth.

Yes there are some really nice Celtic descriptive place and river names in Wales and elsewhere in Britain. Even in some relatively mundane settings. Here’s one to whet your appetite: The Malago is an urban small river, running through Bristol, partially culverted.

The majority of Welsh place names, at least here in the North West of Wales, are just physical descriptions of the location. This why you get so many places called Talybont/Tal-y-bont, Pwllglas or Glaslyn and old houses called things like Ty’n Twll, Hafodty Fach or Ty’n y Berllan.

It is just unfortunate that Aberystwyth is at the mouth of the Rheidol and the Ystwyth flows into the Rheidol.

Maybe the original placename Aberystwyth was further out in Cardigan bay and has moved back in-land over time to the other side of the Rheidol, because of Coastal erosion?

Yes sort of. I think that the river or mouth-of moved… Wasn’tt that on the forum some years ago?

Incidentally, I remember the river Neath being moved around the time of the Eisteddfod. Not because of it though

I read on Wikipedia that the first Norman fortress was 1.5 miles to the South on the other side of the Ystwyth and what is now Aberystwyth town was called something else.

The mouth of the ystwyth was also moved when the harbour/port was built as well.

Aber is not really estuary - it’s just where a river empties into another body of water, which could be another river or could be the sea. Hence Aberhonddu, Aberedw, Abernant all near (ish) me.

Yeah, that’s true, now you mention it. There are a good few valleys confluence ones in the old Glamorgan and Gwent areas.

Aberteifi (Cardigan), where we live, is known by locals as the estuary. It empties into the Irish Sea or St George’s Channel.

When we stayed at Portmeirion some years back, I bought an old book about it written in the early 1900s.

It seems around Snowdonia there was actual land reclaim which astonished both of us.

I’ll try and dig out the book and its title.

Yes, in particular the Cob embankment at Porthmadog resulted in a huge reclaiming of land around Porthmadog and Tremadog and much of the Glaslyn Estuary.
Before: 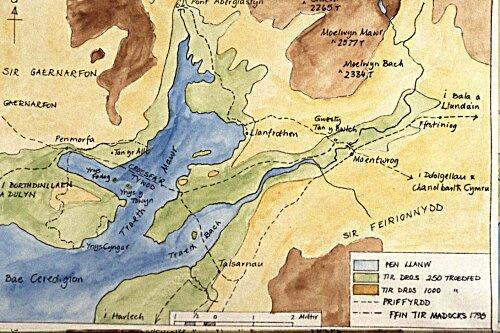 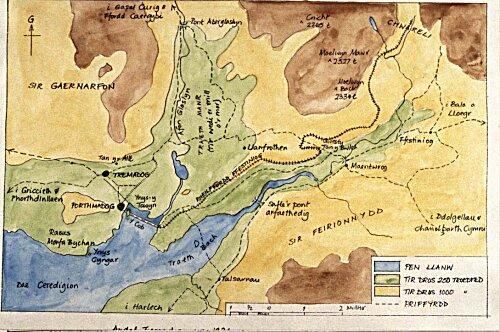 Well done! Who could have thought an idle post would throw up such an interesting sequitur?

Gosh! Is that stable reclaimed land, or is it likely to be lost in any future flooding,?
Or require continuous flood defence work?

As @louis will know “God made the world, but the Dutch made Holland” Perhaps the same is true of the Welsh, and pethaps there is a bachgen bach somewhere with his finger in a dyke.

The cob was built in 1812 so it’s done pretty well, although there have been various widening works done to it since. Also the recent Porthmadog bypass has added to the flood defences (it’s raised up on it’s own ‘dyke’!), but having said that, the area is still pretty flood-able today - the sogginess isn’t that far below the surface in many areas and the areas up the Glaslyn Valley especially flood very easily after heavy rain. Very often the B4410 between Prenteg and Llanfrothen is unpassable.

Having worked on a programme about William Maddocks and the Cob a few years back and currently working on one featuring flood defences in South Holland, this has turned out to be a pretty serendipitous thread!

Siaron, your contributions have been so enlightening. From a throw- away posting, comes such a jewel of information. Diolch yn fawr iawn.

It’s often the way on this forum Monima, and not just from me! - it’s amazing where some of the threads lead!