Hi all a new Sgwrs is up - look out for vocab around birds, celtic rock and winning big money on tv quiz shows…!

Excellent chat! Only reason I knew the million £ question was that they were all born the same year as my Grandad (Fidel Castro was the other on his list). My Dad used to make the same joke (as dads do) about how my grandad had out lived them all except the Queen.

Awwwww you could be a millionaire! If you’d got all the others right too of course! Fascinating insight though wasn’t it. I’m not sure I’d have his nerve!

No way I’d get the fastest finger first!

Wow, how interesting was that?! You really have to be brave to gamble for the 1/2 million as well, don’t you, if you aren’t totally sure

This is an easier one to understand isn’t it?..although it’s a bit longer, it’s a good one to pick for those getting started on the Advanced Content, I’d say.

Yes, it’s more or less the same length as older interviews, but seemed easier.
I agree with @rich on this!

Maybe the guy speaks a bit slower than the average?
Still quite Northern for choice of words, with just a hint of English accent - it seems - but not real tough as many Gogs!

I totally missed the birds, but even reading the transcript, and comparing my understanding to a random earlier episode I had worked on before, it went way better.

Definitely need a lot of nerve not to panic throughout a full day like that, up to the final question, and the risk of losing everything!

I’m starting to be able to focus on a few details as well, so tiny questions:

Thank you @beca-brown - I really enjoyed this one and found it much less challenging than some of the others. Quite a confidence boost!

Excellent! I think Davyth is a very precise speaker, having been a teacher, and he was chatting in his second language too of course. New microphone too, which may have helped…
Dal ati!

Glad you like it! ‘Sgyrsiau yna/yma’ is there to mean these/those particular sgyrsiau are called Beca a’i Phobl.
As regards the ‘mi’, I think it’s just a feel. I also think it might be something that Davyth does and I mimicked - I tend to speak like whoever I’m talking to at the time, especially in Welsh as I don’t have my ‘own’ accent, being a second language speaker and having lived in so many different places!
Yes he is a clear, precise speaker - and it’s a new mic…

Oh I know, I’d have been a total nervous wreck! Davyth strikes me as someone you could depend on in an emergency!
I think the ease of understanding is to do with him being a precise speaker; me having slowed down; a new mic and the fact that we’re familiar with WWTBAM.
Glad you enjoyed it!
Davyth was Learner of the Year in ‘86, and we didn’t discuss that at all, so that’s another Sgwrs that needs doing!

Oh look, I’ve found the whole set of questions!
With moderate guessing and assuming to make the same choices of lifelines I wouldn’t have gotten past 16000 (and without the anxiety, even). 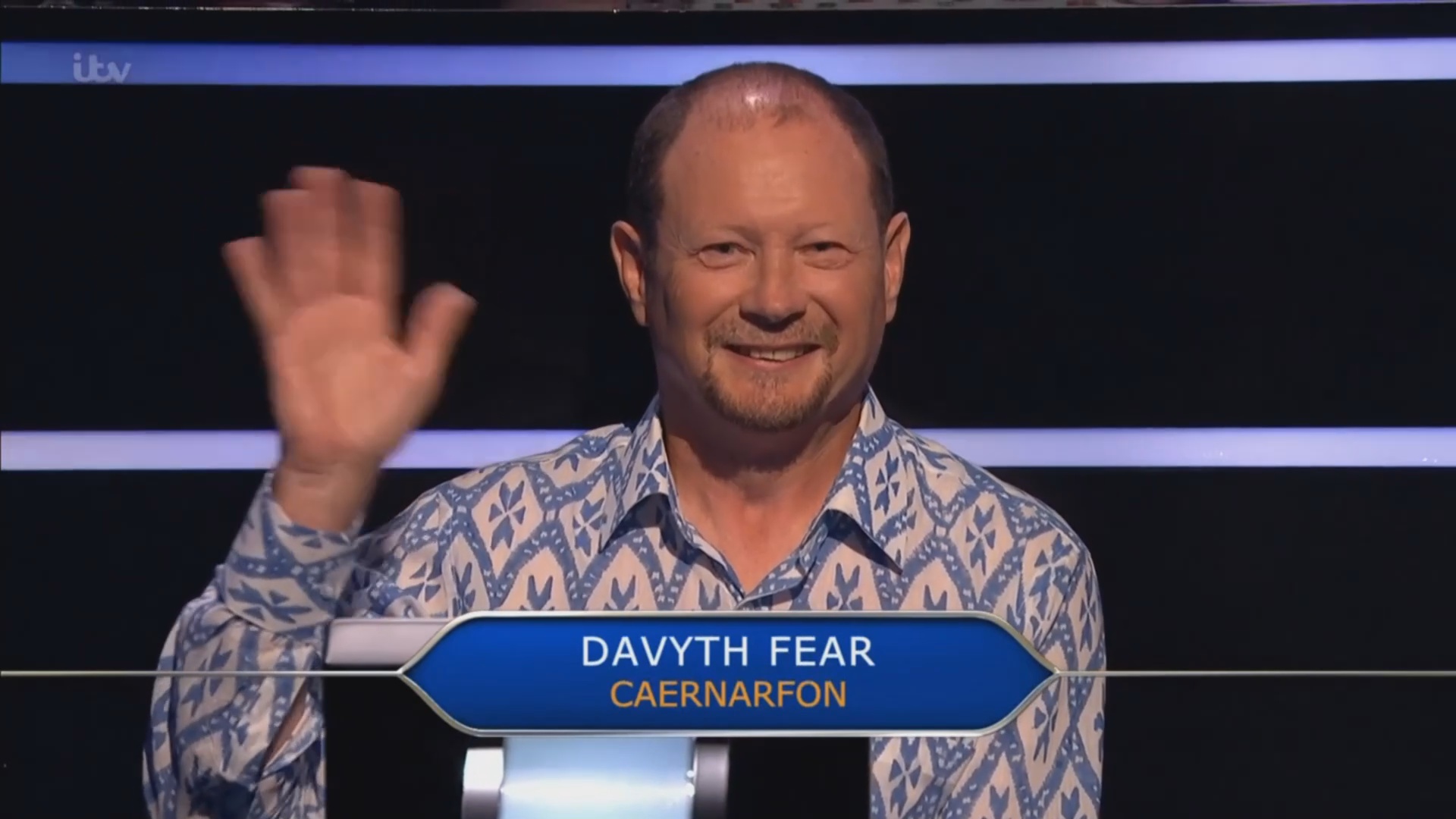 Davyth Fear - Geography teacher from Caernarfon and contestant, who appeared on an episode of 33rd Series of the UK version of "Who Wants to Be a Millionaire?" on September 1, 2019 and 10th contestant, who won £500,000. Trivia Davyth Fear's usage of...

Oh well done you for finding that! I’d never have made the hot seat I reckon, so I’m impressed with anyone who can come away from it with a few quid!

Diwedd y gân, it translates to:

(The end of) the song

…so you get a free ‘the’ and an ‘of’ with every translation!

I’m just so generous!! It’s the time of year…

That English part of my brain always tripped me up. Always wanted to say two yr/y

Diwedd y gân, it translates to:

(The end of) the song

…so you get a free ‘the’ and an ‘of’ with every translation!

I love how concise this language can get!

But now, since I can’t help having lyrics popping up in my mind when I hear some words (just like Dafydd Iwan, right @beca-brown?

(I know that verses/lines may have all kind of exceptions because of the metrics and so on, but just out of curiosity)

The journey finally came to an end

But what about the freebies here?

…the issue here, as you suggested, is the English - the Welsh is very neat and tidy and is always the same - the challenge is making the translation sound right in English.

Eg. The end of the road (and not the road’s end)

So whilst the Welsh version is exactly the same - regardless of the way English prefers to say it:

…when doing a translation you end up having to pick the English version which sounds ‘right’…and inserting some freebies in the process.

Hopefully that makes some kind of sense.