V. interesting comparing similarities and differences shown over last 250 or so years (don’t know anything about sources or reliability of data though)
https://twitter.com/cartograffeg/status/787258439164624897 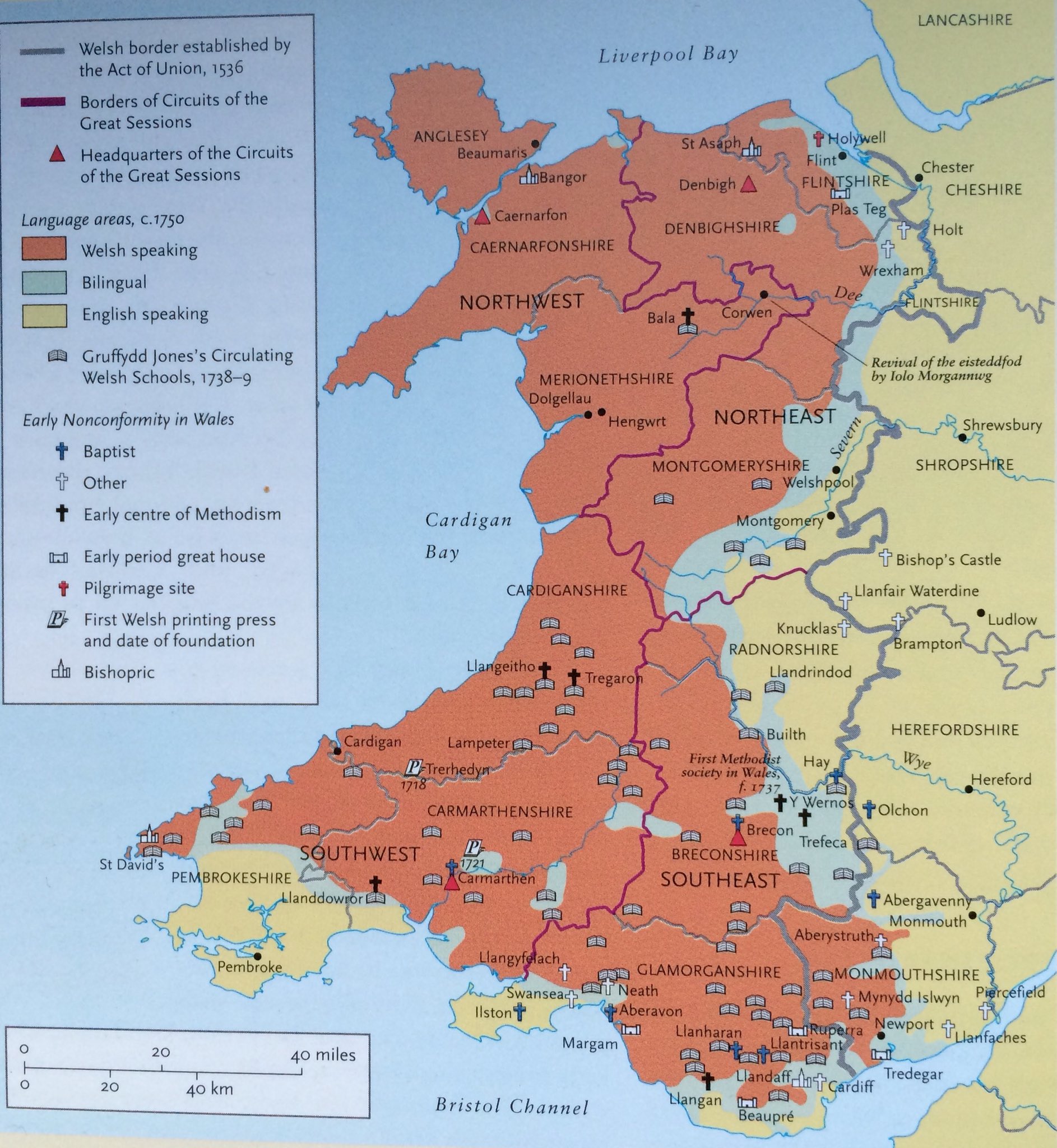 I detect one error that I can be sure of. North Gower, the North edge of the Peninsula, was still Welsh speaking into the 19th century. Lady Diana Barham went to visit and was worried at the lack of religious instruction. She approached the Welsh Methodist Church (actually not Methodist in the English sense - more Presbyterian) and set them up in a series of chapels. Then she had a spat with them because she wanted them to Ordain her Steward or Secretary, I forget which. They had rules which involved study and exams, so she took her money, patronage and chapels and went in search of a a denomination which would oblige her. The Congregational Church agreed. She had chosen the Welsh church because the people spoke Welsh! When she died, her son felt bad about the whole thing and gave the chapels back, apart from a stray in the south where the people spoke English! By my time, they were all English speaking Presbyterian Chapels except Penclawdd, which, had two Welsh speaking congregations when I left Gower, although one was becoming much less so!

That 1750 map displays a classic error in data interpretation. It reproduces without question data that is known to be biased - we have documentary evidence from the time the data was collected that it was wrong.
The data the map is based on comes from Church of England surveys where the local priest was asked in which language parish services were conducted. It is known that, due to a lack of Welsh-speaking clergy, monolingual English speakers would be sent to border parishes and the language of services changed to English only, sometimes from bilingual and sometimes directly from Welsh as soon as the local population showed signs of having even basic English. There is a well-known correspondence from the 18th Century between the parishioners of Glascwm in Radnorshire and their Bishop where they demand a Welsh-speaking vicar since none of them understood the English of the services.
The data, then, substantially overstates the position of English in the border country. Where bilingualism is noted, it should be taken to mean that some of the population were bilingual, but others spoke only Welsh - otherwise services would have been conducted in English only. And where English is noted we should think of the population as probably being bilingual at the time.
It’s also worth noting that the border parts of Herefordshire would still have been at least bilingual during the mid eighteenth century and possibly also the more isolated parts of the Clun Forest (Fforest Colunwy).

I am so sorry that i can’t remember the year, but a Westminster Government decided to change counties. Hereford and Worcester to join as one! Herefordshire was not happy! First i knew was when I phoned home and Mam told me my Dad was on his way to London. It turned out he was part of a large delegation bringing a nice, cuddly Hereford Bull to London. They couldn’t take him to Downing Street in case he got hurt, because he was so valuable that they couldn’t afford the insurance! At the same time, many villages on the Border voted to join Powys! The cross-border cooperation and similarity lasted well into the 1960’s and even 70’s!

1974: The villagers of Brilley petitioned to join Wales rather than be ‘ruled’ from Worcester.