I’m Devon–a learner from the US (Texas). I’ve gathered around 3,850 old Welsh proverbs from old books–the oldest of which is from 1569AD–and I want to know if any native speaker over there has any interest in helping me proof/review my translations. I can send the document to you (and the source books if you want them). I translated these proverbs because I want to begift them to my children in the future (and to other learners who want them–totally for free). This is a labor of love for our ancesters and for the Welsh language herself. I know that everyone has many responsibilities and that everyone is busy, but, to tell the truth, I need lots of help. My Welsh is not good enough to translate each one of them accurately. If there is anyone who would want to help me with this, I would be very, very grateful. Remember that this is for free for anyone who wants it. I will not sell it after finishing. (Please, forgive my mistakes.) Thanks so much!

I don’t know how much of this project you have already done, but may I suggest that instead of trying to translate all the proverbs from scratch, you have a look in the existing books of proverbs to see if you can match any of the proverbs on your list to proverbs that have already been translated professionally?

To start with, I suspect that many of the very old proverbs will be Biblical, from the book of Proverbs. You can then compare the Welsh Bible verse to the English equivalent. Other lists of proverbs can be found in various books and dictionaries. If you have already translated a lot of the proverbs, you could try to match them to existing lists and check your translation that way.

There is just one other problem. Some proverbs are quite clear in meaning and many match the English equivalent, e.g. “Gwell aderyn mewn llaw na dau mewn llwyn” / “A bird in the hand is worth two in the bush”. Others are somewhat opaque, e.g. “Nid wrth ei big y mae prynu cyffylog” / “A woodcock is not priced by its beak”. I think I can guess what that means, but unless a native speaker explained how it’s used (if it still is!), I wouldn’t venture to drop it into a conversation!

Thanks for your kind suggestions, Margaret. I have finished translating everything (after about three months of constant effort). I was able to find about half (or slightly more) of the total number of proverbs already professionally translated by a native speaker (mainly in one of the four source texts I used, though a small handful in other places). About a third to half of the non-pre-translated group were easy to translate and, yes, a handful of these were similar to common English ones, thank goodness! lol

Regarding the non-pre-translated proverbs, they are mostly folk proverbs (regarding nature, relationships, history) and are not religious so there is not really any overlap with known things like the Book of Proverbs from the Bible you had mentioned. And in most cases, it’s not actually the translation part that I am having trouble with so much, but the older fluid orthography. I have done lots of translations of really old Welsh texts so I am really familiar with fluid orthography and all that; it is just that when it is paired with highly condensed content (without supporting context), then it can get really, really tricky. The words themselves are nearly 100% the same as modern Welsh, it is just the spelling is fluid (so it can look like a different language sometimes). For example, “W”, “U”, “V”, “F” are all used interchangeably, which was a common thing in Europe in general during the Middle Ages (hence the German pronunciation of “W” as “V” and so on). Dialect-spelling can be common so even the vowels couldn’t be relied upon (100%), and, like modern Welsh, but unlike pre-modern Welsh, the long vowels (âêôûŵŷ) are usually not indicated. For example, the spelling “wyl”, could be “gwyl” / “bashful, modest”, “gwŷl” / “a sight, a showing” (hence “gwŷlio” / “to watch”), “gŵyl” / “a holiday” (and, by derivation, “a feast”, hence “Gŵyl Dewi Sant” / “Feast of Saint David”), but also “gwyll” / “darkness, gloomy” (and by derivation “a hag, goblin, spectre”), “ffyll” / “overgrown, gloomy”, and all that is without even considering dialect-based spellings: gwel/gwêl, gwell, ffel/ffêl, gwil, gwill, ffil, fill, etcetera. (That was the most extreme example of the bunch.) This is certainly quite fun and makes the language so rich and lovely, but, it can, at times, want to make you pull your hair out (at least until you understand it fully and then, you are just in awe at the brilliance of those who came before). And lastly, on top of that, certain common words are used in a highly derived nature so that if you have that kind of word with a derived-meaning plus one with unclear orthography in a proverb of only a handful of words, the possible translations can be many. Internal context clues like matching with a similar proverb help only occasionally. Luckily though, some proverbs were duplicated with dialect-spelling or even re-worded amongst the different texts so that I was able to sort out quite a few of them that way. A knowledgeable native speaker would be able to sort out many areas of confusion much more easily than I, so it wouldn’t take that wonderful person nearly as long to check things as it took for me to compile everything.

I am really just looking for someone who is much more knowledgeable than I to double-check things and (hopefully) add some annotations about the background history to a reference, to explain how a proverb is used, or simply state that: “Some people interpret it this way and others that way, but based on ______, I think the likeliest meaning is _____.” Something like that would be ideal. I know it is a lot to ask, but I’ve already done the lion’s share of the hard work: updating the spelling for etymological accuracy, translating them (to the best of my ability), and then organizing them appropriately. I just need a final (though potentially heavy) “polish” from a Welsh-language superstar (if one would be so willing to put the time into this project as I have). It’s all for free and I’d be happy to share with the group as the collection is definitely a cultural treasure, to be sure.

It would be a great resource for future learners as well as a wonderful time-capsule of sorts for practical wisdom/knowledge that would be of long-lasting benefit, in my opinion. Plus, I also just don’t want the work of those old writers to get lost in time, since it was a lot of hard work to compile so many different sayings like these and many are, undoubtedly, really, really old.

Thanks again for your response, Margaret. I appreciate the help and interest.

I’m actually just a second language speaker, but I do have a little interest in Welsh and it’s history. However, that all sounds much more complicated than I would want to try to work out. I hope you can find a native speaker who can help.

Here is a link to the translated book of Welsh proverbs I used. It has the English along with the Welsh, in case you are interested: 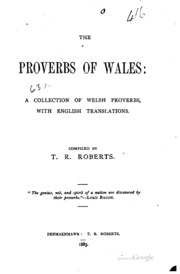 The proverbs of Wales: a collection of Welsh proverbs, with English...

Book digitized by Google from the library of New York Public Library and uploaded to the Internet Archive by user tpb.