In November, Wales begin their FIFA World Cup campaign in Qatar and even if you’re not a football fan or not, it’s difficult to avoid the frenzy.

Over the last few years Wales’ football team seem to have gained more of a following than they ever have. There is a new wave of patriotism, camaraderie, and passion associated with football in Wales and it’s infectious. 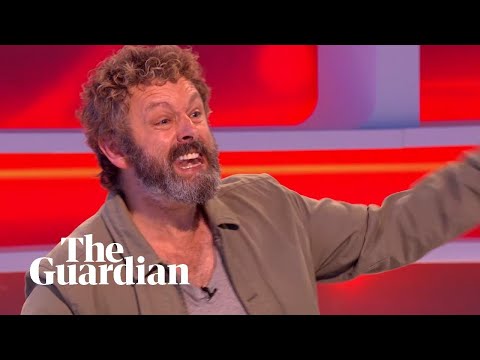 Here’s the transcript incase you fancy a go -

Ok. Yma o Hyd… Yma o Hyd… I hear the voices singing. Speed your journey boys, boys bach. One nation singing with one voice, a song of hope, a song of courage, a victory song that floats through the valleys like a red mist, rolls over the mountain tops like crimson thunder. A red storm is coming to the gates of Qatar! It crackles with the spirit of ’58 and Jimmy Murphy’s boys, it turns the pages of the history books and finds Rob’s page, waiting still to be written. What would you write in there boys? Dare you write your names on that page? We haven’t waited 64 years and come halfway round the world to be troubled by a neighbour from back home! When the English come knocking on our door let’s give them some sugar, boys! Let’s give them some Welsh sugar! They’ve always said we’re too small, we’re too slow, we’re too weak, too full of fear. But Yma o Hyd! You sons of speed! As they fall around us…
WE ARE STILL HERE!
COME ON WALES!

Then he went and actually met the Welsh football team… 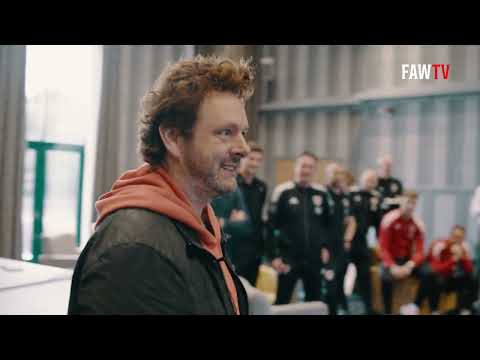 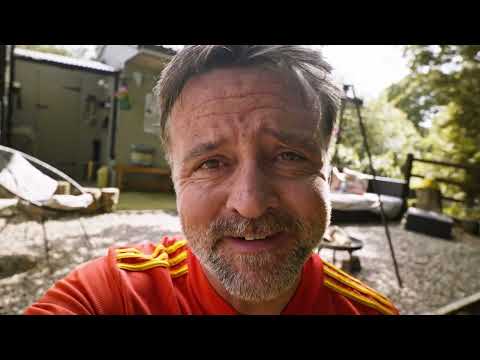 And here’s some headline news for you - The FAW today announces Gŵyl Cymru Festival, a 10-day* creative event to bring communities together as part of the nation’s support for Cymru during their FIFA World Cup 2022 campaign in Qatar. 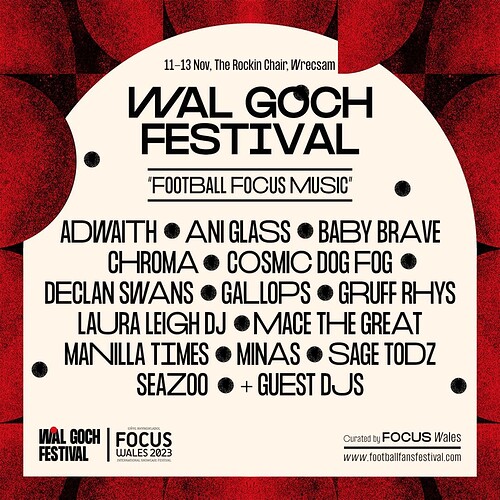 Wales have reached the World Cup for the first time since 1958! Wales’ World Cup begins with the first group round on Nov 21 with Wales v USA at 2:00PM East Coast time. We’ll have a WATCH PARTY sponsored by the Welsh Government!

Bring your voices, and your support!

I’ll put a round behind the bar for you all!

"Wal Goch Festival (Red wall) is being held across Wrexham in November, with the support of the Football Association of Wales (FAW).

The three day celebration will take place on November 11-13 on the eve of the 2022 World Cup in Qatar.

Big names from the worlds of football and film will come together in Wrexham, the Welsh game’s ‘spiritual home’ to celebrate and explore football culture from the perspective of the most important figures of all – the fans.

The festival will feature figures and influencers in the game from around the world in attendance for film screenings, workshops, talks, and comedy.

Over 30 film screenings, including world premieres, spread across venues in the city centre and at the festival hub, Glyndwr University.

There will also be panel discussions, games, gigs, comedy, podcasts plus special guests from the world of football, film and TV!

If you can’t get to Qatar for your dose of World Cup fever, Wrexham is the only place to be this November. It will be the place to LIVE, BREATHE & DREAM FOOTBALL."

Don’t forget the Wal Goch Festival in Wrexham on the weekend of the 11th, 12th and 13th of November! Follow this link to find out what’s going on and follow the link below to buy tickets. I’ve heard it’s going to be epic! 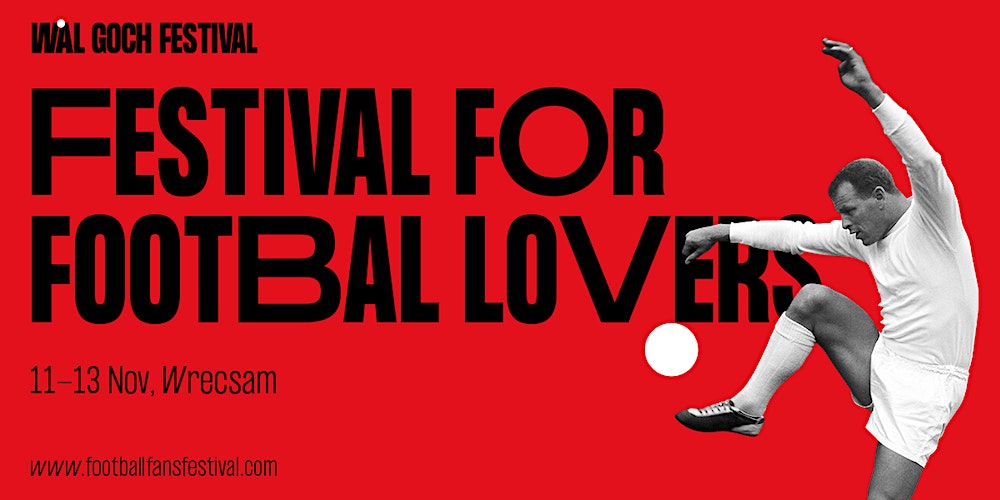 The world’s first dedicated festival of all things football is coming to Wrexham with events across the city over the entire weekend.

For a a free, football-themed, Welsh-language taster session see below!

A primary school in London has been practising “Yma o Hyd”! 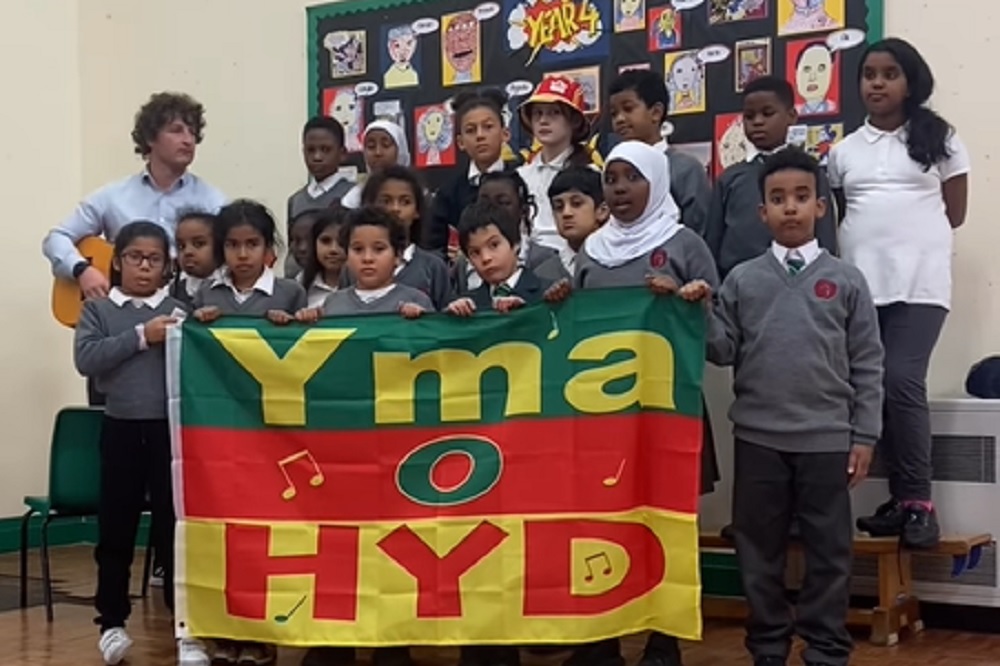 A London primary school have melted hearts across Wales with a rendition of Dafydd Iwan’s ‘Yma o Hyd’. Griffin Primary School in Wandsworth, London learnt the song as part of their preparations for the Urdd’s ‘Jambori’ event tomorrow which will see... 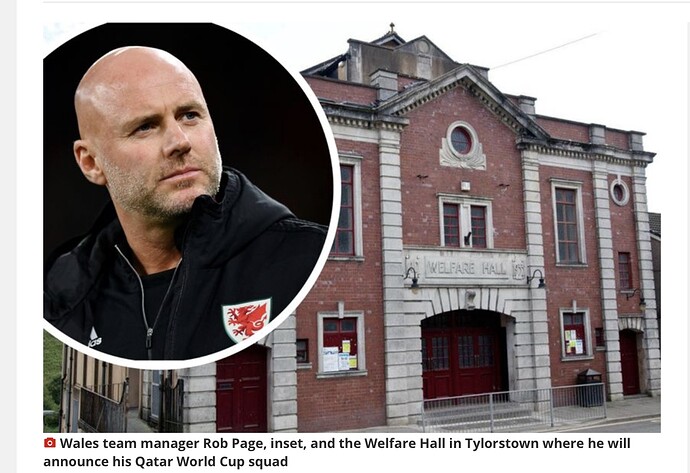 47622903-9550-44EB-81BD-93D11EEEAC03_1_201_a1325×910 273 KB
It was great to see Wales getting loads of media coverage yesterday, even in England, with the announcement by Rob Page of the squad to take part in the Cwpan y Byd. The announcement took place in the Welfare Hall in Rob’s home town of Tylorstown. Dw i’n dod o Pendyrus (Tylorstown, Cwm Rhondda Fach) yn wreiddiol hefyd (that’s where I also originally come from). And the Welfare Hall is on the opposite side of the road to the house in which I was born. Anhygoel! Incredible! I wonder what my late grandparents and previous generations of miners would have made of it all. 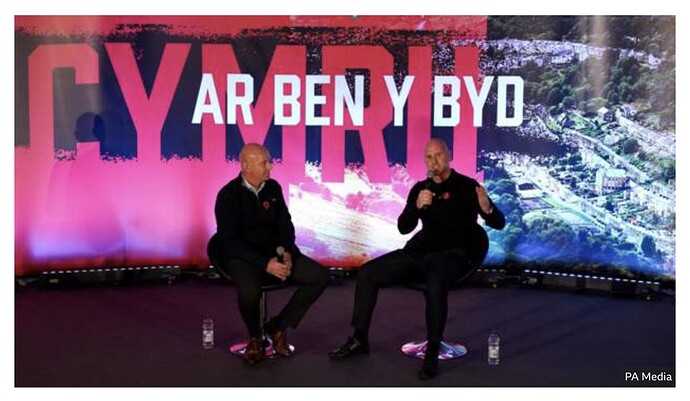 That’s a great story with a wonderful connection! Diolch for sharing!

Fancy being part of a Welsh football themed TV programme in Wrexham?

Looking for Welsh speakers and learners to be part of the television programme ‘Y Wal Goch’ on S4C.*

S4C are filming two episodes of the TV show ‘Y Wal Goch’ at Tŷ Pawb on Wednesday 16th November and Wednesday 30th November. The pre-recorded show will be hosted by Welsh musician Yws Gwynedd and there will be live entertainment from Adwaith on the 16th of November and Swnami on the 30th of November. The fun show discusses the Welsh Football Team as they take part in the 2022 World Cup in Qatar.

Afanti, who are producing the programme, are looking for Welsh speakers and learners to come along to Tŷ Pawb, Market Street, Wrexham, LL13 8BY to be the audience for the shows between 6-9pm on both dates. 2 free drinks will also be provided to all attendees!

If you are interested in being in the audience as the programme is recorded, please let me know by responding to this email or giving me a call/WhatsApp/text on 07534 439860.

It would be greatly appreciated if you would share this message with other Welsh speakers and learners who would be interested.

Thank you, and I look forward to hearing from you!

If you have Spotify (maybe it’s on YT too, haven’t looked) - this is the best World Cup song I’ve heard in many a year 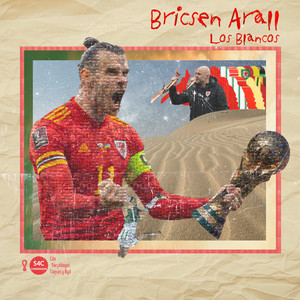 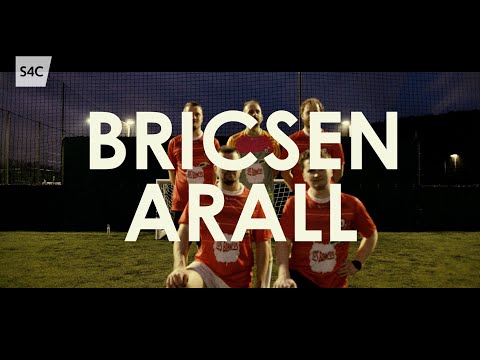 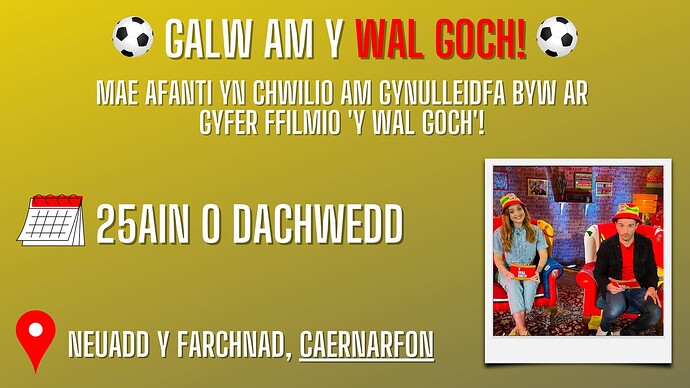 Not that I’m distracted by the World Cup or anything, but I’m on Week 20 of the 6min challenge (which is the week we talk about ‘watching the football’), and I keep unconsciously mutating ‘pêl-droed’ to ‘bale-droed’. It’s beginning to stick in my mind, and it’s driving me mad.

If you live in Sir Benfro …

Here it is! The version of Yma o Hyd you’ve all been waiting for 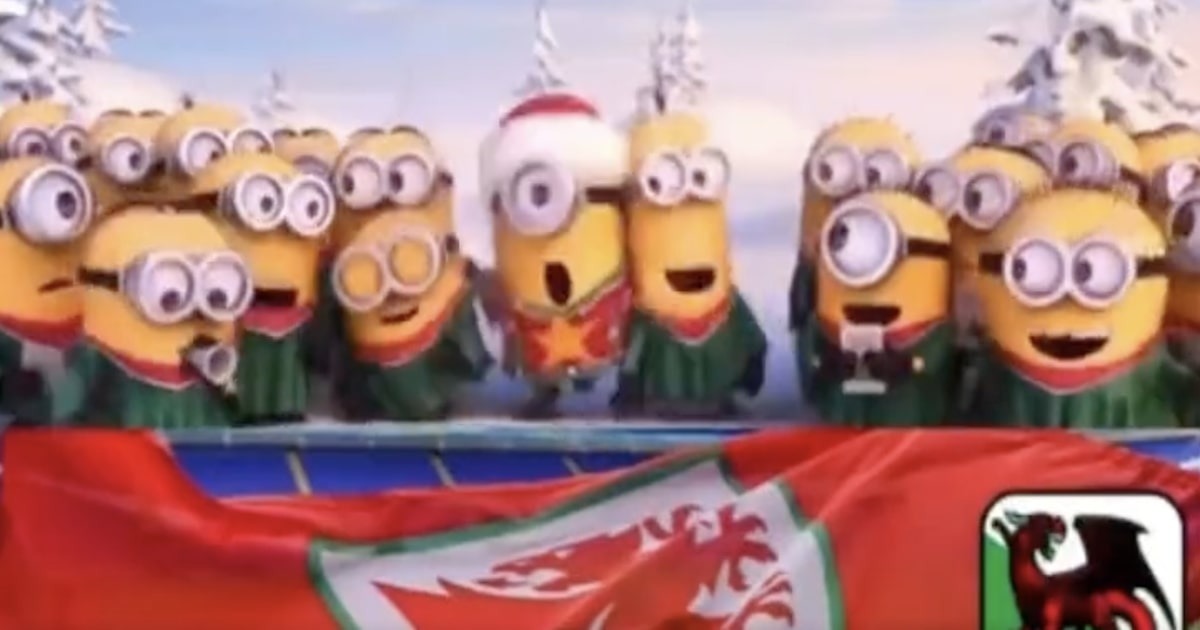 Everybody’s favourite little yellow henchmen the Minions have thrown their colourful weight behind Cymru ahead of the England game with a brilliant festive football verson of Yma o Hyd. Dafydd Iwan’s tub-thumping Welsh anthem has now been reinvented...