Using your Welsh in Machynlleth

I read somewhere in the sudden explosion of ideas on this forum a conversation about how great it would be if every town had its own cultural centre like the Old Library in Cardiff, and the proposed new centre in Caernarfon. But I’m too excited to find it right now…

I was feeling a bit hard done by, wishing we could have a centre in Machynlleth, and then it dawned on me that we have - the Owain Glyndwr Centre! For those who haven’t yet visited, it’s a Grade 1 listed 15th century building, which during the summer months hosts a little exhibition about the great man, sells a few Welsh books and CDs, and offers tourist information. The centre is staffed by Welsh-speaking students and volunteers, who greet and talk to visitors in Welsh. Siop Alys, a lovely welcoming Welsh-speaking cafe, is in another part of the building.

I was fizzing with ideas about how the centre could develop - a small cinema (showing films about OG and a taster session on Welsh provided by SSiW), a bigger and better exhibition, more activities for families… I mentioned this to @helenlindsay, who’s on the committee of the trust which runs the centre, and she explained that there are plans to develop the centre, but of course they cost money and need to be sustainable in the long run.

In the meantime, since people are increasingly coming to this forum to ask,’ Where can I use my Welsh?’, please add this venue to your list! You might get to talk to @helenlindsay, - but be warned, you might find you’re talking to me…

We’re going down to Machynlleth en masse as a family on either the 8th or 9th August, partly to go and see my painting on show (and to vote for it!) at MOMA but also to have a day out, so we’ll be sure to pop in!

Caffi Alys is a regular for me, we try and get up there at least once or twice a month. Lovely staff there!

Also, about 5-6 miles outside of Machynlleth is ‘Caffi Cletwr’, which is a sort of low key service station for the A487. They will shortly be moving to a new building on the same site.

This is another great place to grab a coffee, do a bit of food shopping and practice your Welsh. Most of the volunteers there are learners themselves, but they are all more than happy to converse in Welsh.

Purely so I can cry quietly or comfort myself - when did the OG Centre open? Back when, I used to drive from Gower to Gwynedd to visit my ‘Auntie’. I tried out most routes. When I tried the coastal route, I was getting on fine and liking it until, at Machynlleth, I found a right turn that was really sharp and met an American couple coming the other way. We met by making car-to-car contact. As we had both hit brakes hard, the car damage was minimal. Both drivers got out. “You were on my side of the road!” he accused. “Look!” I pointed. We were exactly equally at fault, each of us had misjudged the corner by the same amount! We exchanged details and I was a tad worried that his hire-car company might chase me up, but never heard more. However, put off that route, I never returned to your famous town, never stopped to explore and have wished otherwise for years!

Info on the canolfan:

Hmm - you might be disappointed if you made a long trek expecting hi-tech displays and lots of activities! The centre seems to have fallen on hard times, and is looking for development ideas, and money to fund them, to renovate the ancient building and make it accessible, and to extend opening hours. But it’s still a place which welcomes people keen to practise their Welsh!

I missed my chance between '92 and 2006! I never took the coast route again and my health isn’t up to travel now. Ironically, I wouldn’t have expected fancy displays, just to see where Owain Glyndwr held his Parliament when Cymru was a free Independent country for the last time! I never even thought of stopping on that journey, I had in mind to plan a linger there in the future, only to forget that when put off by mini-prang! Not the most adventurous person, me, more scaredy-cat than fierce dragon!

Ooh. I love Mach & Dolgellau and the whole area. I AM moving there one day – will remember this on next visit!

The self-service machines in the Co-op speak in Cymraeg and Saesneg! There is a little flag to choose in the top right corner of the screen. It’s really small, so I hadn’t noticed it until last week, but I think it’s a recent addition.

But the machines are much less co-operative than the staff, who also speak Welsh!

Another great opportunity to speak Welsh in Machynlleth! The Gŵyl Glyndŵr is on 15th-17th September.

On Friday 15th, there is a talk (with cheese and wine). Then on Saturday in the afternoon there are different activities: bouncy castle, face painting, quoits, the Welsh Whisperer, Mr Phormula and Cor Meibion Machynlleth and in the evening Meic Stevens, Mari Mathias and Casset. On Sunday morning there will be a walk round the town, based around the book by Jan Morris ‘A Machynlleth Triad’ followed by lunch in Caffi Alys.

As well as just coming along, we need lots of stewards and the local committee are hoping that learners will volunteer to welcome people, take their money and supervise the bouncy castle, etc. Are there any takers for a 2-hour slot? 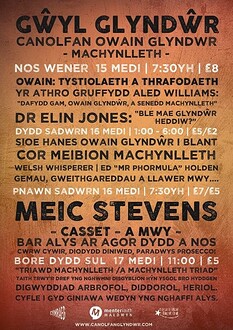