Typos/mistakes in 'Some Sex and a Hill' - have you spotted any?

So far, sharper eyes than mine have picked up a stray ‘neutron’ and a mistaken ‘refectionary’ - and I noticed myself that we need a carriage return in the table of contents before the ‘About the Author’ link…

Anyone else spotted any others?

I ask, because I’m about to fork out for a revised formatting of the text before we set it up as a paperback via CreateSpace…

So if you sing out now, you’ll be directly improving the paperback (and the digital version too!)…

I am shamefully only up to Episode 8 at the moment, while I’m trying to find me at least a couple of hours peace and quiet to allow myself to read the rest of it! Hopefully the weekend will bring me plenty of this since I have a couple of days off. Hopefully also, all the errors will have been spotted by then too!!

I am enjoying the book so far though, and once finished I will leave my review.

Meic Stevens spelt ‘Stephens’. I only noticed it because reading you mention him led me to ebay /ama*on(No purchase made yet - any suggestions?)

Yeah, there are two of them - Meic Stephens, father of the DJ Huw Stephens and the original graffiti artist of the Cofiwch Dryweryn wall (Tryweryn when he first painted it), and Meic Stevens the singer-songwriter.

Download Apton ( www.apton.cymru ), get a month’s free trial and do a search for Meic Stevens. His early classic Gwymon doesn’t appear to be on there though.

Yes, the book refers to the singer but spells it Stephens.

@aran I seem to notice layout faults and miss misspellings or typos, but wasn’t sure if those faults were ‘really’ there or just in the way the kindle app displayed the pages so I’ve taken some screen shots (it seemed the easiest way to explain what and where they were), stuck them on a word document and will email it to you as an attachment ('cos I don’t know how to put it here!)

Yes, I seem to remember that there were 2-3 paragraphs where the final sentence wasn’t complete.

When do we need to respond?

diolch yn fawr iawn! Really helpful screen shots - and those were all formatting issues, so probably something to do with how Kindle processed the pdf - means it’ll be worth trying a mobi file next time.

When do we need to respond?

I have run across several spots (maybe three or four?) where it looks like someone did what I sometimes do in MS Word - accidentally dragged words out of place in the sentence. Once I figured out what the sentence should have said, it made sense, but otherwise it was almost word salad. I’ll have a look back through it as soon as I can to find the specific places.

Yes, I seem to remember that there were 2-3 paragraphs where the final sentence wasn’t complete.

And one where four “odd words” appear between two (non-related) paragraphs. It’s in Pennod 13 , Deffro’n dawel (When reading on my Kindle Fire, it’s at Location 1216). The four words _
Eisteddfod and language which
appear all on their own, sandwiched between the para which ends with the word “grew” and the following one which starts with the word “Now”, 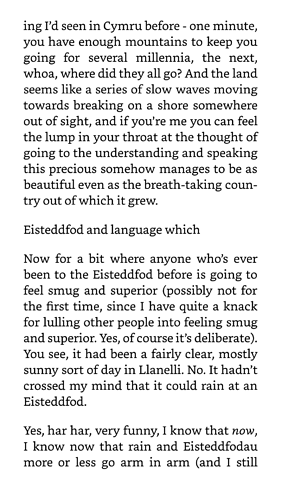 And one where four “odd words” appear between two (non-related) paragraphs. It’s in Pennod 13 , Deffro’n dawel (When reading on my Kindle Fire, it’s at Location 1216). The four words _
Eisteddfod and language which
appear all on their own, sandwiched between the para which ends with the word “grew” and the following one which starts with the word “Now”,

Diolch yn FAWR, Gavin, Colin, Sionned - this kind of stuff is an issue with the file transfer - I know the formatter didn’t change any of the text, and that kind of hiccup isn’t in the original - so next time we’ll be uploading a mobi file.

So - foggy though it is - ‘normal’ typos (or even spelling mistakes!), please sing out - odd breaks in the text or carriage returns in the middle of a sentence etc, don’t worry about them - a mobi file upload should solve them all (fingers crossed!)…

@aran I flagged some mistakes using the “report content error” feature in the Kindle.
Do Amazon pass these reports on to authors or would you like me to find the mistakes again?

Thanks very much for that, Paul - nope, Amazon don’t seem to pass them on - they may just use them as a way to punish books with too many errors - but for now, we’ve got a mountain of work done, so rather than you ending up doing extra checking, it might be better to wait until we re-publish the latest version…

Diolch o galon for your help…

I noticed quite a few actually starting with ‘Geiriadur’ very early on but I’d have to go back through to find them. If Sarah is going to proofread the whole thing, then you don’t need me to do that, do you?

Ugh, did I mess up geiriadur? I’ve had problems with that ever since finding out that it’s geriadur in Breton (if I’ve got that the right way round…;-))…

No, absolutely - thank you so much for such a hugely kind implied offer - but I definitely don’t want people doing unnecessary extra stuff…

thank you so much for such a hugely kind implied offer

but I have to be realistic and admit that I don’t have the time. Llyfr doniol iawn, gyda llaw! Sgwennais i adolygiad ar Amazon, ond rhoddwyd fy ffugenw Amazon yn awtomatig.