Should I be worrying about learning the gender along with every noun I learn?

I am wondering what is the best way to go about learning noun gender? Should I just learn nouns when I come across them and not worry about attaching gender to them right away or should I be strict about this and find out the gender as soon as possible and learn it along with the word? What is the best method? Should I just learn a noun and not stress out about it, and learn it’s gender as I go along hearing sentences and such through context?

I would say a mixture of both. It’s very useful if you can learn the gender of a noun as you learn the noun if you can, but it’s definitely nothing you should be strict about or stress over.

Learning as you go along hearing and through context shouldn’t be underestimated, you will pick up a lot this way. But maybe learning how to say ‘two’ of a noun when you learn it will help (dau lyfr / dwy ffilm).
The problem with trying to be strict is you may find yourself stumbling in conversation to remember the gender even when you know the noun instead of coming straight out with the noun (even if the gender is wrong) to keep the conversation going (which is very important for your confidence - building your confidence speaking is more about being able to speak comfortably than being grammatically correct at this stage)

You will also come across nouns which can be either gender - and with these, different areas will have different ideas on which gender they are!

To be honest, even the first-language speakers I work with often have to ask what gender something is - they don’t ask when talking generally, but if it has to go into a script or something official, there is often a bit of a debate and some dictionary-checking!

So basically, no, you shouldn’t be worrying about learning the gender when you learn the noun - great if you can, but by no means something to worry about doing

Native speakers use hwn and hon this when specifying a noun’s gender - so when you ask about (for example) ystafell, you say ystafell hwn neu hon? and back will come the answer ystafell hon.
So this is a handy way of learning gender. Alternatively when you learn a new noun, add a mutatable adjective, for example mawr big. So say out loud llyfr mawr, and ystafell fawr. The saying out loud is important, of course - we really learn by ear, not by eye.

that’s a really good way to learn hon/hwn, which normally fail me! I will definitely add this in when I am asking the nouns for things. Diolch Gareth.

Is hwn masc or fem? And hon? Diolch.

hwn is masculine, hon is feminine

Thanks, Gareth that’s a great

idea. So far I’ve learnt the gender of some nouns that way by chance- mostly place names like Brynmawr and Fforestfach. So I’ll up my game and do it actively from now on. It feels like it’s going to be as helpful as learning with the gendered article with other languages (der die das for German)

This meme refers to French, but I couldn’t help wanting to post it here as it’s just as relevant to Welsh 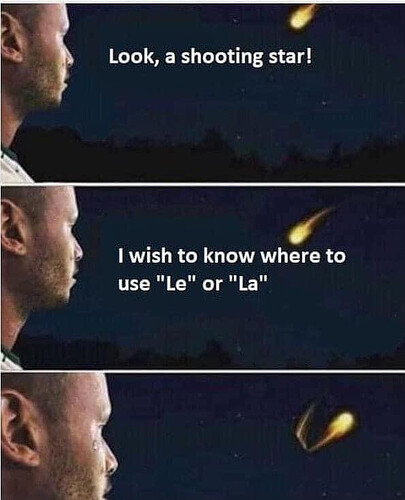