Question about 'I was'

EDIT
SHOULD BE:
On etc as you say is I was… for stuff that takes a longish time
Es etc is I did (do something), more of a one off action.

Good news. There’s loads of stuff about this on the forum. Or at least for the shortened colloquial versions on and nes. @Nicky is your man, I’ve tagged him. He’s also made a nice video on it. Or check this out: “Wnes i” or “o’n i”?

Alernatively, if in a rush
Es etc as you say is I was… for stuff that takes a longish time
On etc is I did (do something), more of a one off action.

Someone will be along later

SORRY THIS IS WRONG I’M RUSHING TOO MUCH IGNORE ME, JUST GO BY THE TOP FWE PARAGRAPHS.

There are a few oddities - but if you really wanted a quick and dirty rule:

Bues i - is a bit of an odd one, as I’m not totally convinced there is actually an English-direct equivalent. It refers to an ongoing action, that has finished/stalled.

Ro’ni/ O’n i/ and the equivalents are something that happened in the past but their happening was a slightly longer or a more continous thing. “I was speaking…”, “I was running…” “I was hiding…” “He was leaving…” “She was stopping…” “They were going…” “I was a good footballer when I was young”, “She was a good rugby player ten years ago”.

Hmmmm. I think I’ve got it.But thanks anyway.

I always think of “bues i” as “I beed”, which of course doesn’t exist in English.

Y Cyfeiriadur explains it saying: “The commonest use of this tense is to denote having been in a particular place, and the sentence will invariably contain a reference to a specific period of time.” it goes on to say, “Bues i” etc is often better then “ro’n i” etc because “ro’n i” usually implies longer term and continuity, whereas this is a past, completed state of being."

I always think of “bues i” as “I beed”, which of course doesn’t exist in English.

yes, that’s it, but the form ‘beed’ does exist in English, albeit it a small pocket of local dialect English in the Forest of Dean (I have family there!)

Bues i (etc) often corresponds to ‘have been’:

Also corresponds to the special use of ‘be’ in English meaning ‘go and visit’:

Fuoch chi erioed yn Ffrainc?
Have you ever been to France?

Big discussion about bues i vs o’n i in the Grammar, §244

Now I’m noticing it on the radio as happens with anything that you’ve just learnt.
It came out as “bu (some verb)”.

It makes sense now, sort of -

Be, will be, have been

Come to think of it, it makes more sense than some stuff in English, such as “it will be meant to be” what a mix of tenses that is

Thanks Gareth. Do you have a link to that discussion? 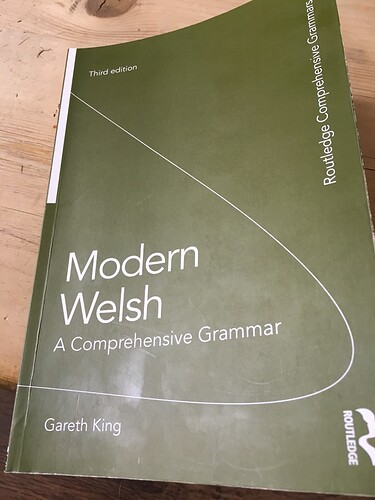 Hi Rich. Thanks for that. I’ve got several grammar books but understanding them is like trying to swim through glue. For me it is anyway.

Ha, ha, yes I know what you mean…the forum is a good place if you have questions… R

If the selection doesn’t (yet) include the Gareth King one, it’s probably a worthy addition - clearer than most, and genuinely focused on the kind of spoken, contemporary Welsh that SSiW covers. (If the current edition is a bit forbidding in price, older editions are still out there for less - while I’m sure Gareth’s improved it, I doubt the language itself has changed enough between editions to be a deal-breaker. I hope he doesn’t mind me saying that - I’m not sure how royalties work on the older editions…)

Ha, ha, yes I know what you mean…the forum is a good place if you have questions… R

I have two problems with asking questions in the forum:

I type things that have caught me out/ I want to find out later into my phone - it works quite well most of the time - the only problem is understanding what you meant afterwards, ha, ha.

I wouldn’t worry about having too many questions- you can never have too many of those!

I hope he doesn’t mind me saying that

I don’t mind at all