The new PANTO will be shown very soon !
It’s not only fun…it’s educational

Before you prepare to watch the Panto you need to know a bit about the background. Based on the true story of Trefor and Eileen Bessley from Carmarthenshire.
Eileen and her husband Trefor became leading campaigners in the right to use Welsh in the 1950s, as at that time the Welsh language had no official status in Wales: no forms by public bodies were issued in the Welsh language and there were few bilingual road signs. The Beasleys refused to pay their tax bills until they were written in Welsh, as at the time they were written only in English. This refusal led to the couple being taken to court 16 times over the course of eight years.

Will there be a mention of the Panto on HENO tonight @nia.llywelyn 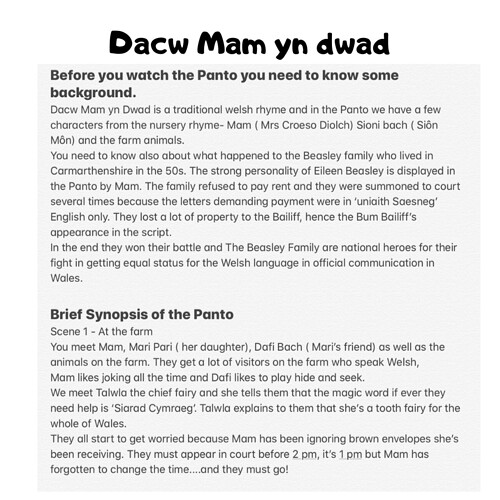