Odd Story In the News

Bad planning by the Army leads to a tragic accident, but the coroner* seems to think it’s because the pesky Welsh didn’t give Ceunant Llennyrch an English name. 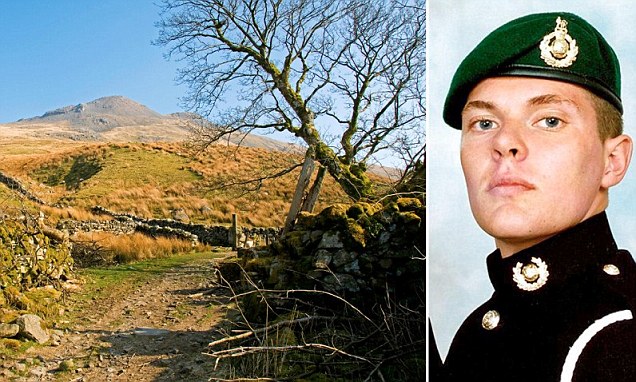 Did Royal Marine die because map was written in Welsh?

Ashley Hicks (pictured) fell 100ft down a gorge during a training mission in Snowdonia, Wales, after the word for 'gorge' was not translated from Welsh on his map.

Cwm Cneifion or the Nameless Cwm - which sounds better?

*Does anyone else think of Frank Sinatra whenever news about a coroner crops up on Radio Cymru?

The British army trains in Malaysia, Norway, Germany, Kenya, Borneo; all round the world…Sadly, there as well a few die and yet I’ve not heard of our coroners complaining about their usage of foreign place names.
Lets be honest the modern army has been training in Wales for over a hundred years without this being an issue…God, I hope he doesn’t suggest they should always be wearing high-viz as well now…
We don’t live in a perfect hazard free world…The deaths and accidents just in the Snowdon area every year testify to that. Many where individuals or groups have made good preparation.

I don’t think that the coroner is ‘blaming’ Welsh, just stating a fact that this poor bloke could not read/understand the word and therefore did not foresee the danger. He should have had a map he could read whether he was in “Malaysia, Norway, Germany, Kenya or Borneo”. The coroner quite clearly blames the MOD and not the Welsh Language.

I am ex military and I know that if you are given a map you are trained to trust it is ok. These guys would have assumed that if it wasn’t translated is wasn’t important. Very tragic and very sad. Before SSIW I would not have had a clue what it mean’t either, and would probably have made the same mistake.

Another example would be that RAF maps have power line overlays so that helicopters don’t fly into them. If the overlay was not there the pilot would simply trust the map… again with tragic results… I am sure Leia Fee will testify to the importance of power line overlays on maps!!!

On a more positive note, I often heard Welsh spoken when I was in the RAF, and had many Welsh speaking friends, in fact my closest friend is a first language speaker from Nefyn… we met in Ramsgate…

The British Military recognise the importance of Welsh and it was most recently used by the Royal Welsh Fusiliers in Bosnia for secure emergency communications because their codes could have been broken. Wikipedia states that it was not used in the Falkland Islands because of the Welsh speaking community in Patagonia.

Andy: I don’t think that the coroner is ‘blaming’ Welsh, just stating a fact that this poor bloke could not read/understand the word and therefore did not foresee the danger. He should have had a map he could read whether he was in “Malaysia, Norway, Germany, Kenya or Borneo”. The coroner quite clearly blames the MOD and not the Welsh Language.

Well, yes, the coroner squarely blames the Army for not preparing correctly, and as part of that questions why the map wasn’t ‘translated’. I looked at a map of the area earlier on today. I think the contours tell you all you need to know, really. The name of the place is irrelevant and the coroner had no business mentioning it.

Horrible spin the Daly Mail has managed to put on the story, too (“the word ‘gorge’ was in its Welsh translation” - What does that even mean?). But I suppose that goes without saying.

Meant to mention re the High Viz vest… The last time I was on guard duty with an armed guard I was required to wear a hi viz in case I was knocked over… !?!

There is a much better report in The Daily Post, without the spin but I dont know how to post the link…

Alright, Andy! I only made the high-viz comment because it said he was on an evasion exercise…I work on large open industrial sites and viz makes a lot of sense there…

Well, you can always rely on the Daily Mail to put a nasty spin on things - I’m sure they’re deliberately going out of their way to make their readers as paranoid about everything that doesn’t fit their idea of “Britishness” as they are.

Kim, I think you are misunderstanding me. I was really made to do this. I was violently agreeing with you…

The translation or lack of was possibly a contributing factor -but really the contours should have indicated “gorge” pretty clearly. presumably “mountain” “river” etc weren’t written on there…?

It would have helped. But so would a big red line or a GPS or a tether so they couldn’t stray too far, but at some point realism and common sense have to take over.

I don’t think I’ve ever even SEEN a Welsh language map - where did he get such as a thing? or was “ceunant” part of a placename? I can’t imagine the MOD created their own map and chose to label physical features in Welsh from the off. Do they routinely translate all placenames in case they are clues to hazards? They can’t be walking around with maps reading “Pen Y Fan / The Top Place” and so on can they?

Map reading can’t be done by blindly staring at a map in any case.You need a sensible sense of the bigger picture. In the powerline overlay example you don’t take it on faith that they’re were a chart says and that the chart is perfect and complete - you look for shadows of the pylons on the ground and gaps in hedges and trace the line of the cable runs you can see and note where the building they might be feeding are and make an educated guess to be used in conjunction with the chart.

Here’s that link, Andy. Must say the coroners comments and news report makes totally different reading to other media as well…

Snowdonia: Death of Royal Marine who plunged 100ft into gorge was 'clearly...

That Daily Post report is a very different take on it, isn’t it?

Reading the Mail version back, I don’t think it even quotes the coroner in relation to the Welsh language - just kind of puts words into her mouth and lets the reader fill in the rest. Quite clever in a way, but really horribly cynical.

Leia: was “ceunant” part of a placename?

Yup - Ceunant Llennyrch. The Mail translates this as “Maentwrog Gorge”, but I would wager that no-one calls it that - Googling the exact phrase gets about 3 or 4 unique direct hits.

Agreed. Horribly cynical and divisive too…

Bless you Ashley, may you Rest in Peace.

Andy: Welsh was most recently used by the Royal Welsh Fusiliers in Bosnia for secure emergency communications because their codes could have been broken.

Interesting stuff, Andy! Haven’t heard of Welsh been used as a form of code before.

And yes, a cynical article from a nasty paper.

My dad was in the Royal Welch Fusiliers during WW2. I would have loved to ask him about the use of Welsh in the regiment, but sadly that was never possible.