Meet-ups and walks in Italy

Maybe there’s not many active SSiWers in Italy, but this doesn’t mean we can’t organize meet-ups and walks to practice Welsh, here.

After a couple of unsuccessful attempts (once with @Novem and once with @Baruch), two small meet-ups did happen!
They weren’t advertised here cause it was a bit of a last minute organization in both cases, but we had:

1st Italian meet-up (May 7th 2019), Venice - SSiWers @Baruch and @gisella-albertini . Special non-Welsh speaking guest, Avital. To be honest we didn’t really speak a lot of Welsh - it was more about eating cicheti with wine while chatting and walking in lesser known areas (including a guided tour of the ghetto, about which Baruch and Avital new way more than me so I took the opportunity of learning something new!)
But still…Cymraeg was spoken, and that’s enough to make it an official meet-up, right?

2nd Italian meet-up (June 17th 2019, Torino) - SSiWers @Deborah-SSi, @gabycortinas and @gisella-albertini. Even though Gaby was quite exhausted for having just dealt with Dante and Petrarca at the University right before meeting us - Welsh was definitely spoken. And by people from 3 different continents! For a series of coincidences we met at a bar named BarBiturici but then made sure to get a proper Italian gelato at Mara dei Boschi.

1st Italian Welsh Walk (June 18th 2019) SSiWers @Deborah-SSi and @gisella-albertini. The plan was showing Dee the beautiful mountains of Piedmont, but heat and humidity were so high these days, that we couldn’t really see very far.

However, we could definitely walk, and speak quite a lot of Welsh, in the Occitan valley of Val Maira and the wine hills of Roero.

Funniest moment: when Dee and I talked a bit in Welsh at a Tourist Office and then noticed the guy had given us a map in German 'cause that’s the closest he could guess from the sounds he heard!

And of course…this is just the beginning!

It was brilliant meeting up with you and @gabycortinas in Torino, and the gelati certainly helped with the heat. I’ll have to return when the weather’s likely to be cooler so we can have a decent walking holiday. If we organise it in enough time, maybe we could get a group together and have a proper SSiW excursion!

If we organise it in enough time, maybe we could get a group together and have a proper SSiW excursion!

So also @HuwJones can get his own gelato here and is not geloso any more!

My husband and I will be visiting Torino in October. Perhaps an Italian SSIW meet-up is in order?

Yes, we can definitely try and plan a meet-up in October.

Or at least, start making sure I don’t plan to go to Wales in the exact same dates, 'cause it would be quite a shame!

Oh dear, that would be a shame! We’ll definitely be going near the end of the month since that’s when my mother-in-law’s birthday is. Possiamo rimanere in contatto.

the location of your SSIW meetings sound a bit better than the pub-next-to-the-railway-line in industrial Leeds which I go to!..hmm

Not to betray the industrial soul of my hometown, this is also available for rent: 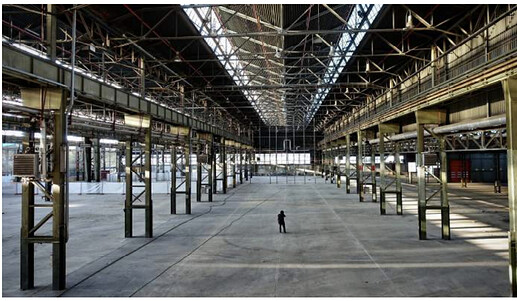 Is this an old FIAT factory?

Actually, part of the 2 million sq. mt. Mirafiori plant is still active. But some areas -like this- are not used any more, and starting to be recycled in various ways.

An meet-up in October might work for me. I plan on starting the 6-month program when I get back from Scotland in August.

Great! Let’s keep the end of October as a good time for next meet-up. Let’s see if someone else thinks of joining us, then we’ll start to think of details!

I have family in Calabria near Fagnano Castello any other Welsh learners in the deep south ??!! Hope to visit again next year. Usually drive down via Mt Blanc tunnel.

I haven’t heard of any Welsh learner in the deep South so far!

However, there are for sure in Torino (where I live) and Roma which are on the way from Mt Blanc to Calabria
So if you decide to stop for a chat…just let me know, and we’ll see if we can work it out!

Alright! I’m sending you a private message (via this Forum) right now - see if you see it!
So it’s easier to plan things that most of the Forum is not involved in, and also to send out phone or addresses!

Ooh, once I’m settled in Vitoria-Gasteiz and my bank balance has recovered from the move somewhat, I’d be up for a quick trip to northern Italy if it’s somewhere I can get to from Bergamo airport

Oh, great!
Now of course travelling is not back to normal, so there might be more complications (especially in that area which was the epicenter of COVID!).
But in general it’s the biggest low-cost-flight airport in Northern Italy so it has easy connections to most cities.

By the way, since you’ve last been here, I’ve got in touch a Welsh speaker/enthusiast who lives exactly in Bergamo.
And two Welsh who live in Italy - one is a learner, one a native speaker, even.

So plenty of chances to visit a bit around, eat and drink well and also keep Welsh language fresh.

p.s. I’ll write you more about it, but I might be going to Pau, France in September - that’s not too far and could be a chance to do a Basque meeting, to start with!

That sounds brilliant, Gisella! Another Welsh meetup in Italy!

I could probably get a bus to Biarritz, then another across to Pau. Or you could do it the other way and visit me!