Lord of the Rings

Has anyone heard if Tolkien has been translated into Cymraeg? Or know why it hasn’t? I was a little surprised, given how Welsh was a big influence when he was developing one of the Elvish languages.

Does anyone know of a similar fantasy/fictional alternative? Working on my reading but hate being limited to things I wouldn’t normally be interested in (but find myself going through) just because it’s yn y gymraeg.

I suspect the reason it hasn’t is because there isn’t a translator with enough spare time (Senedd and legal duties keep them pretty busy).

The closest I’m aware of, other than Harri Potter, is Dadeni by Ifan Morgan Jones. It’s not identical it’s a modern twist on the Mabinogion. Very good but quite challenging level of Welsh.

Wow, translating The Lord of the rings would take a long time. Its funny I wish sometimes I could read Spanish or recently Polish to read books in their original language. I think lord of the rings is one of those books you have to read in English but that’s easy for me to say when English is my first language. Be interesting to know what books are available in Welsh. I bought a Roald Dahl book yesterday motivation to learn more.

Manon Steffan Ros has two books for children “Trwy’r darlun” and “Trwy’r tonnau” which are fantasy, but have more of a “Neverending story” than “Lord of the Rings” feeling. But she’s a great writer, so that might be interesting, if you aren’t against children’s books. Bethan Gwanas has a fantasy series, “Cyfres y Melanai”, but again, it’s more of YA story and not Tolkien (though I honestly think nothing in fantasy compares with Tolkien). Dadeni is set in the modern world, though apparently it does have a fantasy twist later on.
Speaking about translating Tolkien into Welsh - that would be wonderful, but I’m afraid Sindarin is so similar to Welsh that a part of the otherworliness of the Elven language will be lost.

I think lord of the rings is one of those books you have to read in English but that’s easy for me to say when English is my first language.

I read Lord of the Rings in Russian:) It is beautiful, but, of course, every translation makes tiny shifts in the meaning of the novel, especially when it’s not the author doing the translation.

Slightly at a tangent, but sort of related:
The Lost Words by Robert McFarlane with illustrations by Jackie Morris, is a wonderfully written all-age book, in a poetic style, exploring English words that are in danger of disappearing from use.

The Welsh language version, Geiriau Diflaneg is translated by Mererid Hopwood, who many of us remember from the Carmarthen SSiW Party in 1998. I don’t have the Welsh version, but judging from it’s title, I suspect that it will be even better than the English one. 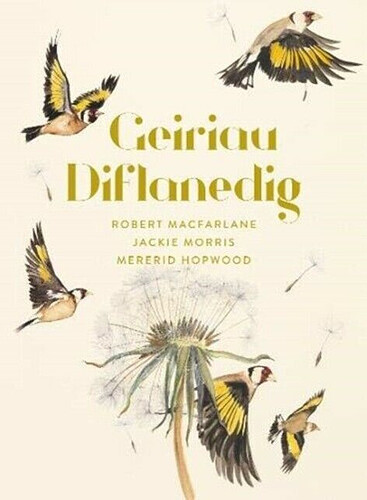 Dadeni is set in the modern world, though apparently it does have a fantasy twist later on.

many of us remember from the Carmarthen SSiW Party in 1998.

One of the main characters is Bendigeidfran’s head

That would be grand.

I recall one story in the Mabinogion had a guy throw a spear so hard, it went through solid rock and hit his enemy standing behind it. I’m still laughing at the antagonist’s epic demise.

Bendigeidfran was King of Prydain and went into battle with Matholwch King of Ireland over the actions of his brothers (very mischievous and not very popular with the animal rights lobby) and the treatment of his sister who had married Matholwch.

After a very fierce battle that was prolonged because the Irish had the Pair Dadeni (a cauldron of rebirth), Bendigeidfran returned to Prydain with the other 7 survivors. He had his son Caradog decapitated him and bury his head in the Gwynfryn in London to ensure everlasting protection for the Prydeinwyr.

This is giving me so many ‘Chronicles of Prydain’ flashbacks. First you mention Prydain, then a magic cauldron…