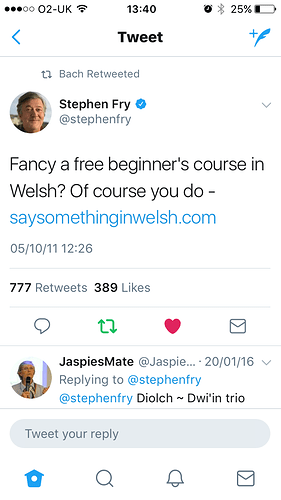 Yup, sorry, my fault, I exhumed that to show @Charlottevaughan - and it always takes on a bit of new life every time we dig it out…

He also follows/followed me on Twitter. Read into that what you will…

I was quite excited when he followed me back.

Umm, now … it would be interesting ot know if “JaspiesMate” really tried it …

Are you wth us?

The one who replied to Stephen Fry and thanked him for the link. (look at the tweet @AnthonyCusack published here. And, yes, those are old tweets so even more chances this man tried SSiW or didn’t try it.

(or I’ve missed something here …)

Oh, right, didn’t notice that! Yes, it would be interesting… who knows…

Might ask him although cruising trhough his twitter timeline a bit there’s no sign of still learning Welsh at all and it consists more from retweets and replies than his own tweets though so I might just stay quiet for a while yet.

Even though it was an old tweet, it has made my day