Wonderful! Although I’ve never been professionally interested in Mandarin (that is subject to change haha), my curiosity for Mandarin has existed on-and-off for some years now. Hopefully SSi has some Mandarin course creators soon enough.

I’ve always been interested in Chinese (love the characters) and then I had to go out to China for two months for work and decided that it would be a good idea to learn at least something before hand, so did maybe 2 months’ worth of Chinese classes before going (a massive help). Being a linguist/language enthusiast and unable to give up things like that, I obviously carried on with classes after I got back home.
There are loads of apps etc for learing characters out there and they do usually have audio, but finding listenting material of a suitable level is not as easy so an SSi would be great for that alone. But then getting help and practice with learning the most useful patterns would be amazing!

As a native Swedish speaker, I’d be happy to help out with this, with the caveat that my schedule often is rather full.

I’d love to hear Scottish and Irish Gaelic and Breton. It would be lovely to refresh my French in this way too.

I’m sure these have appeared on other wish-lists, too (including mine).

I’d also love to see Swiss German and Mandarin! Especially Swiss German, since to my knowledge, it’s more of a spoken language than a written one. That would make it perfect for learning with SSI!

I’d love to see some Scandinavian languages. Norwegian, apparently is the most mutually understood. (I’m no expert here)

I’d love to see the Scandinavian languages as well. I’ve studied both Danish and Norwegian to some extent. I believe it’s true that Norwegian is sometimes considered a sort of lingua franca between Swedish and Danish. Another fact is that Bokmal written Norwegian is extremely close to written Danish (for historical reasons). There is another variant of written Norwegian called Nynorsk which is much less close. However, spoken Norwegian has a lot of dialects, which adds a complication, plus spoken Norwegian and spoken Danish sound quite different.

On another tack, although not for me personally, I’d think there might be a demand for Yiddish, which would fit quite comfortably between German and Hebrew.

…and is in danger of extinction, I believe, so another good reason… mazzel tov!

It would be a shame to lose this: Bei Mir Bistu Shein

My dad used to sing the German version, usually when he was in a merry mood.

There are a lot of words of yiddish origin in Dutch: http://forward.com/culture/140080/doubling-dutch/ - “many of these words are related to the world of petty crime or money”
“De mazzel” is still a common expression for good luck in Dutch

Some lovely Yiddish words have penetrated our vernacular, too. To name just a few that begin with sch, we have “schlemiel, schlep, schmaltz, schmuck”. An American Jewish friend of mine taught me some biological words that I can’t share in company as refined as this.

Swiss German is also a written language, although not in formal letters, e-mails etc. But when leaving little notes for co-workers, or writing SMS or WhatsApp messages, we’re using a lot of Swiss German. The good thing is, that there aren’t any general grammar rules, you just write the words down the way you hear them, and it doesn’t matter if you write “Schwiizertütsch” or “Schwiizterdütsch”…and, of course, every canton has their own dialect. I think the coolest dialect is the one spoken in the canton Wallis, as it sounds sweet and unique; and it’s closer to Old High German than other dialects. This fact is elaborated very well here:

Walliser German in comparison with Swiss German and the internal characteristics.

P.S. A lovely Swiss German word is “Bünzli” (adjective: bünzlig). It’s not only a Swiss surname but it describes somewhat narrow minded and overly honest Swiss people - or a typical Swiss object. It can be used in a derogatory or a friendly, well-meaning and teasing way, it depends very much on the tone. When we see a cuckoo clock or an advertisement for Appenzeller Räss Chäs (cheese) on a poster, we usually go: “Das isch dänn büüüüüüüüünzlig!” 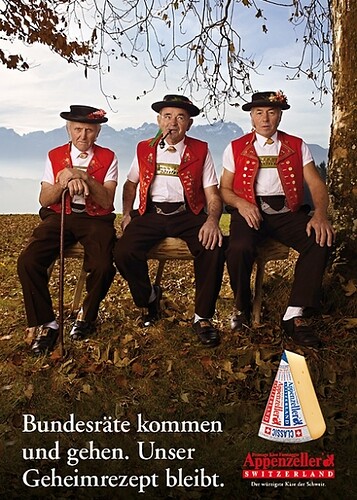 Fantastic insight into Swiss German! I love the small bit about the Wallis dialect (I’m looking over this site now

) but I would indeed love to learn some Swiss German, if not become strong again with that ‘general’ dialect… German is on my list and I am eagerly awaiting a German course for a serious refresher.

As for cheese and language, this video is a Fondue commercial and depicts the relationship between Germans and Swiss in a very humorous way. The lady could be lovingly called Frau Bünzli, and she’s doing her best to explain her German friend that in Swiss German, politeness is essential…and that Chäs (cheese) and Fondue have to be pronounced correctly!

You know, the invisible border between the French speaking part and the Swiss German speaking part of Switzerland is called “Röschtigrabe” (rösti - ditch) and describes the cultural and political differences and the latent conflict between the Francophone and the German part of Switzerland. Rösti, (fried potatoes), a Swiss national dish, is loved on both sides of the ditch…

With only 37 people left able to “speak” this most interesting language we have to have SSi Sfyria.

I’ve never heard of Sfyria before, thanks a lot for making me aware of it, Gruntius, it’s most interesting! I can imagine one needs quite a good hearing to be able to distinguish the heights and lows of the whistles, the melody of the whistled words.

Absolutely amazing — I’d never heard of it either, but just found this article about it: http://www.bbc.com/travel/story/20170731-greeces-disappearing-whistled-language Must be one of the hardest languages in the world to learn, but one that definitely needs and deserves to be saved!

Hear, hear! I absolutely agree. @aran Is this possible?

Maybe it would have to be called WSiS — Whistle Something in Sfyria!