Can anyone suggest card or board games in Welsh which would be good for a group of learners to use to get talking? But NOT scrabble!

Sorry, I can’t help you, AmadaLaing, but this thought was too funny to pass up.

S’mae!
Upwords is amenable to this, perhaps even I Spy for no moving parts required?
More helpfully:
http://mylanguages.org/welsh_games.php
https://www.learn-welsh.net/welshgames

Just had an idea over brecwast this morning for a revised version of Welsh scrabble which I’m calling “Treiglo!” - basically Scrabble in Welsh but with two new rules:

I hate scrabble in any language

My first though was Gair am air, but that’s basically Scrabble with cards instead of tiles.

One thing currently on my to do list is to translate some of the cards from Codenames to Welsh, so that I can play it with my Welsh speaking/learning friends. (There’s no official Cymraeg version).

One thing currently on my to do list is to translate some of the cards from Codenames to Welsh,

There are a few here - They’re aimed at children, I think, but they will probably work for adult learners - I’ve played one or two of them in the past and they didn’t seem ‘childish’.

Anyone else out there who can offer a review of these games?

I’ve played the Chewdlau CYmru top trumps style ones a few times and they’re fun in a conversation starting way.

I really really want to set up a group playing Amazing Tales. I’ve been plaing it with my neices and nephews and reckon it’s be a fab learning game if you just did it in Welsh. 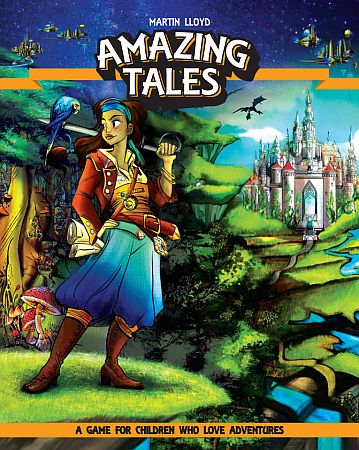 A game for children who love adventures

It’s sort of a super-simplified Dungeons-and-Dragons a-like. Someone is storyteller, the rest are adventurers (you make up a character with an assortment of skills). At various points in the story who have a ‘what do you do’ moment and have to roll a dice a find out if you suceed in what you tried (using one of your skills).

I’ve tried the word test. Good fun. I find it harder to do English to Welsh translation of words than the other way around so good practice for me.

I fancy playing the galactic game

I’m currently working on making Taboo cards for different levels of Welsh (elementary, intermediate, advanced). I use them with my English students and they are generally very fun and make even shy people talk. The rules (for those who’ve never played it) are very simple - you need to explain a word without using 4-6 words given on the card (for example, explain “literature” without using the words writer, author, book, novel, award).
I think you could also use them without a partner, just to revise vocab, but it’s more fun as a game.

I really like the sound of this idea @seren! Anything that helps with vocab gets a big thumbs up from me.

On a gaming note I’m just crossposting to this thread because I’m starting up a board/card/RPG group in Welsh in Swansea on Tuesday evening. First sess is 18/02/2020 in Copper Bar. From 18:30 on…

For the Port Talbot group I bought some childrens picture cards in a car boot sale. each person picks two at random and aims to make up a sentence using one or both if they’re feeling brave. Also we build a short story a sentence at a time taking it in turns to add to the story. Hilarious results. We also have cards with English sentences on the one and Welsh on the other, again we pick a few at random and go around the group each translating from one or the other. We’re constantly looking for games/ideas too, in order to keep us chatting in Welsh. Hope our little games help a bit. Pob lwc.

On a gaming note I’m just crossposting to this thread because I’m starting up a board/card/RPG group in Welsh in Swansea on Tuesday evening. First sess is 18/02/2020 in Copper Bar. From 18:30 on…

Would you like me to promote this in the weekly email Leia? Just PM me all the relevant info and I’ll pop it in!

Yes please! I’ll put some words together and PM