I noticed on the news there was a report about the hospital in Oswestry and the hospital sign was bilingual - even though the town is in England! (though only just). Then I saw this video from 1972 when there were discussions about whether the town should be returned to Wales.

Watch: 43 years on - should Oswestry be in England or Wales?

Should Oswestry be in England or Wales? That was the question asked by a team from ITV regional news more than 40 years ago – and a  film of their findings has now been published on the internet.

There are a lot of people in the Oswestry area that speak Welsh. I’m not going to say any more other than the can of worms was already open before you got here.

Interestingly one of the few Welsh Language Bookshops outside of Wales is in Oswestry. I work in one of the schools and there are a fair number of Welsh speaking students and staff. I get to do a bit of practice most days. It is real border territory!

I think the (post-conquest) Normans moved the border eastwards a few hundred years after the Battle of Hastings. Not sure whether they would still be called Normans except I think there were still Lordships in place of Norman origin, so their power did derive from the Norman Conquest.

I believe the view was taken that “England and Wales” was now one country and that it therefore “did not really matter” which side places were on, so the move was just a matter of administrative convenience. It reminds me a little of when the Soviet Union decided to include Crimea with Ukraine in 1954 (having previously been under Russian control). The soviets believed their system would last forever so it did not matter to them what hypothetical effect moving the border would have on future populations. And the rest is (recent) history, of course. It is interesting to ponder, however, that Welsh Kingdoms existed long before Russia existed as a country at all.

If Cymru gains independence (or, arguably a significant increase in devolved powers) in future, then it may matter quite a lot which side of the border a town ends up on. Potentially it matters already for reasons of language availability of services as well as things like free prescriptions and access to affordable Higher Education. I am not sure to what extent Croesoswallt would divide along ethnic loyalty lines in a referendum on the border or to what extent the English-identified population would be attracted by the potential benefits of access to Welsh Government services.

Here’s another can of worms: http://www.bbc.co.uk/herefordandworcester/content/articles/2006/11/13/hereford_in_wales_feature.shtml

The border was set by the Acts of Union under Henry VIII. These gave several hundreds that had previously been in the March (i.e. part of Wales) to Herefordshire and Shropshire. These included Croesoswallt (Oswestry), Colunwy (Clun forest) and Erging (the district on the west bank of the Gwy/Wye). Since the idea was to create a single country (basically to absorb Wales into England) it really didn’t matter that these districts were allocated out of place, and it’s only really around Croesoswallt that it remains an issue (and not a very significant one), though I’ve met people west of Clun who regard themselves to be more Welsh than English.

I wondered if Herefordshire would come up!! My Dad worked in Hereford. When the Government decided to join it with Worcester there was a hell of a row!! They took a pedigree Hereford bull to Downing Street as part of the protest and a whole raft of villages along the border voted (unsuccessfully) to join Cymru!!! As far as I know, the people still resent losing status and ‘being run from Worcester’!

Hereford and Worcester were split again into separate counties in 1998.

(and not a very significant one)

I think you are right here Rob. Everything is all ‘mixed’ up and it feels quite nice. Most English speakers make a fairly good stab at all the Welsh Places names and some of these are on the English side of the border too!

Some have been corrupted somewhat, though. I remember a fuss a few years ago, reported in the Montgomeryshire County Times, when a developer wanted to call a new estate Maes yr Onan (which apparently can be interpreted as a Biblical reference to something unspeakable) after the name of the field s/he had concreted over. Obviously this was a local mangling of Maes yr Onnen (Ashfield, literally, I suppose).

Mind you, Welsh was spoken in parts of Herefordshire until the nineteenth century, so comparatively recently on this sort of timescale.

Hereford and Worcester were split again into separate counties in 1998.

Thanks!! I’m glad they got their wish!! I lost all contact in 1987 when my stepmother died. Oh, and some Herefordians had accents with a lilt! In fact you could measure how far you were from which border by the way people talked! 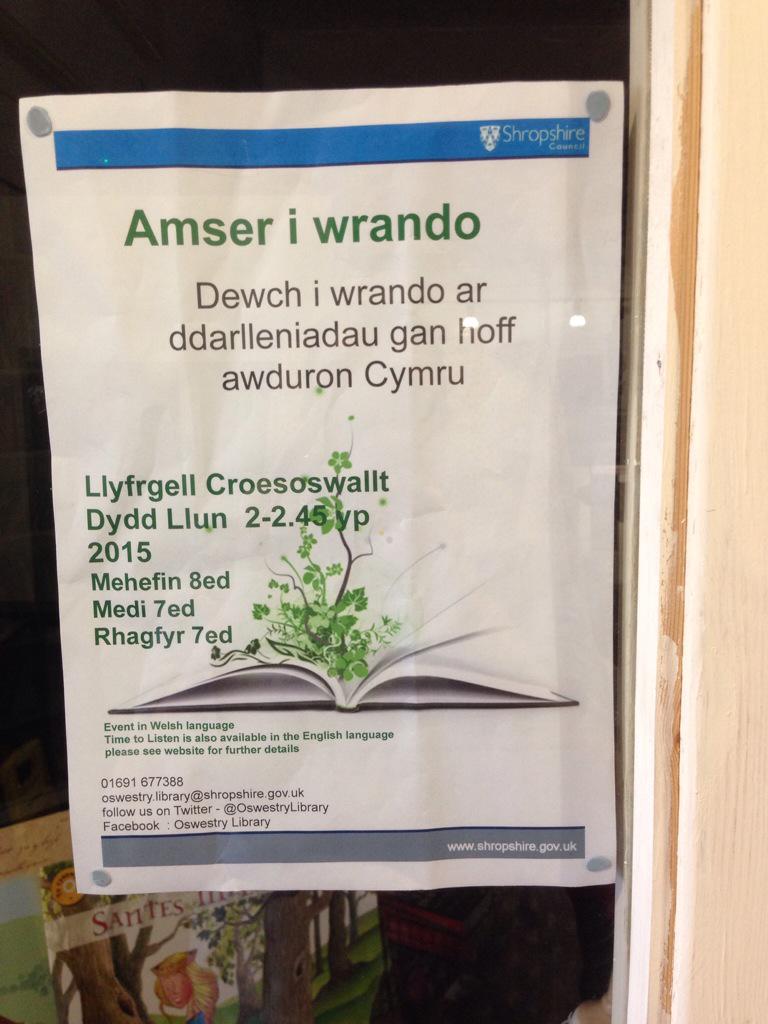 From an English Council! Thanks for sharing!

Some more info on the topic here

A leading businesswoman has backed calls for the Welsh language to be taught across the border in Shropshire.

I went to school,in a village, Llanymynech, which was actually on the border. There were two schools in the village, which was small then, one taught in Welsh one English. Unfortunately I went to the English one because of the three teachers one was my aunt, one my mothers good friend and the other a neighbour, I always wanted to speak Welsh and when I was quite young on holiday in Aberystwyth, I bought a booklet, Welsh in a week,
(It didn’t work, can’t think why not).
There was no drinking in Wales on a Sunday then and the pub on the border only opened the Welsh part on Sundays. I remember a sign saying last pub open on a Sunday before Wales.
Lots of Welsh place names in the area on the English side and I think some of the villages on the English side used to be totally welsh speaking.
I crossed Offas dyke several times on the way to school and we used to stand astride it as children and say I’m half in England and half in Wales. We used to sing very politically incorrect rhymes when we were skipping!
I later went to school in Oswestry and remember the farmers speaking in Welsh when they came to the Smithfield in the town on a Wednesday.
Since a child I have always felt Welsh and can’t explain why.
The Welsh shop in the market in Oswestry always welcomes Welsh learners if anyone visiting Oswestry needs a practice.

I totally echo that! (and I think that I may have got the same Welsh in a week book on a visit to the mountains when I was around 10!) I went to Oswestry School and any suggestion that we should learn Welsh, rather than French German or Latin was very much frowned upon (and I did ask)

I can’t see why we don’t teach Welsh as a second language elsewhere in England. I’m in Somerset, and children here are far more likely to take a trip across Dau Bridge Two into Wales and be thus exposed to Welsh than they are to visit, say, Germany. Language learning is a skill in itself, so those who enjoy it will go on to learn “more useful” languages anyway. It’s certainly not going to be a hindrance.