Nothing to do with the SSIW iPhone app, by the way.

Has anyone at all been able to get an iPhone to work in Welsh? We’ve been forced to move from Android to iPhones at work for ‘security reasons’, and I find that I can get my new phone to do some tokenistic stuff like display dates in Welsh, but everything else is painful. For example, on Android I can get a Welsh keyboard with an easily accessible apostrophe character (vital - much more widely used in Welsh than in English, indeed, probably one of the most used characters). In ios10, I’m having to switch to the number/character keyboard every fourth or fifth keystroke.

Additionally, I can’t get Welsh predictive text or spell-checking. At all.

This is really frustrating, and for a company (I can’t say too much more) that keeps telling us how much it values diversity to force this on us is really disappointing.

I’m thinking that for the time being I’m going to have to carry two phones around with me which just seems stupid as well as inconvenient.

it is painful, I’m afraid! The only thing I can offer for you is the accents you need. When you’re typing, if you want an ô, say, hold down the o ‘key’. A little pop-up box will appear with all the available accents for that letter and you can slide along to the one you want (so you can also get ö or ø or whatever).

But there’s no Welsh predictive text for iPhone that I’ve yet been able to find. And I hadn’t noticed the apostrophe thing before, so I’ll think on that one…

if you want an ô, say, hold down the o ‘key’. A little pop-up box will appear

Yes, I’ve got something similar on Android. I’ve found, though that on iOS, you need to keep your finger on the screen or the pop-up disappears before you can choose your accented letter. So you need to drag your finger to the letter you want. Trouble is, if you’ve got fat fingers like mine, it’s not easy to see exactly what is underneath your fingertip, so it’s trivially easy to end up with a ö when you were expecting a ô!

Thanks for the thread. I have a third-hand ipad with similar disadvantages and am learning from you! Any hints gratefully received, but I use my lap top for the Forum!
edit: tried accents. Horrendously difficult. Maybe arthritic fingers do not help!

Unfortunately, there is no Welsh language support as yet on iOS devices, but there has been talk about Welsh becoming available soon (again, unfortunately, this talk has been happening for years!!).

Go to Settings / General / Language & Region. In Region, make sure it is set to United Kingdom. In Preferred Language Order, select Cymraeg. Scroll to the bottom once this is set to check the Region Format Example is showing the date in Welsh, then it’s done!

EDIT: Not sure if the ‘United Kingdom’ setting in the Region section is entirely important (it used to be), but as long as you have your preference language set to ‘Cymraeg’, you should be all set to go!

… and just so you get an idea of what you’ll get with these settings:- 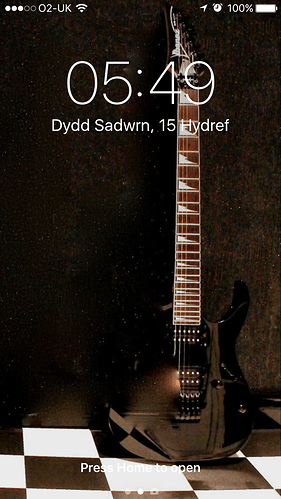 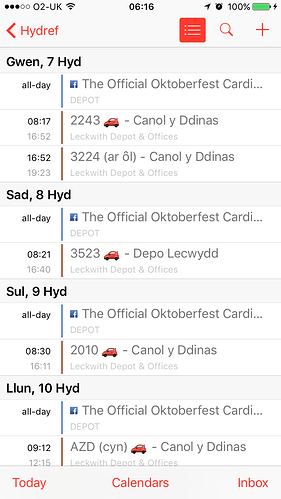 just so you get an idea of what you’ll get

Oh, Gav, at that time dw i’n cysgu! I have never been a morning person. When in London, I had to get up in time to commute, but not until it turned 6!! Retirement (early) had me saying, "Right! Never again will I get up before 7, unless there is a really, really good reason! (It’s usually 07.30!)

Being a bus driver, I need to be awake at some ridiculous hours of the morning, or be up until really late at night depending on what type of shift I’m doing. Today wasn’t a really early start at work but I did need to be up as early this morning.

Not so much a

above, more a sympathy vote!

Since yesterday (18 May) SwiftKey, the third party iPhone keyboard app has been updated with a whole load of new languages including Cymraeg. This means predictive text in Welsh! Yay!

I still can’t work out if I can customise the keyboard to include an apostrophe - Swiftkey has a quick punctuation key which means that if you hold down the full stop key, you get a pop-up with other characters (comma, question mark, hash etc.) but no apostrophe. Any tips?

Just downloaded this and it works a treat!