Idea dump: how to get more people using their Welsh?

Pam lai maybe data protection laws on accessing e-mail addresses but in my head it would be like an mail shot but without the associated print and delivery costs.

Weere a good conversation starter with the parents because lots of the kids were on a steddfod-ish scramble to get as plastered with stickers as they possibly could!

How are you on Open Badges APIs? seems to me there might be mileage there both from the certification point of view and the “recognising progress” idea…

Yes, social media will be important - e.g. create one of those overlay things people add to their profile pic on Facebook “I’m one in a million” or similar

Twibbon is good for this purpose it just needs one does graphic and starts the campaign and invite users to add thingy on their profile picture. Twibbon now functions for both, Facebook and twitter ao you cn add the badge in two steps, one for twitter and other for FB. I love this idea!

It’s totally new to me. Sounds like a good suggestion for that. This is a url I found with info: https://en.wikipedia.org/wiki/Mozilla_Open_Badges

From a more psychological perspective and for those who are open to it: help learners cope with their nerves, doubts, frustrations etc, not just by encouraging them, but by actually working with the intensity of those emotions. I’m an EFT practitioner (Emotional Freedom Technique) and even though it may be too woo-woo for some people, it’s an incredible method to calm down emotions and restore inner calm, which helps the learning process immensely. It can either be done through a skype conference call, or I could post a couple of videos n youtube specifically about emotions relating to learning and speaking Welsh and link to them in the forum.

EDIT: I realise now that maybe my idea is more suitable to “just” the SSiW community, so I’ll leave this post here for now just to float it to you, but I’ll remove it or move it to a more appopriate thread if necessary.

help learners cope with their nerves

I think it would be a good idea if every town and village , no matter how big or small had somewhere designated for people to go and speak Welsh . Some of them could be self sufficient , and some would probably to be subsidised but this would mean that every community in Wales had a place where locals (or visitors) could go and have a chat in Cymraeg. They would be particularly useful in majority English speaking communities as they would bring the few Welsh speakers together for a sgwrs in their native tongue . They would also be very useful to adult learners who would always have somewhere to go and use/practice their Welsh . It could also be somewhere where children who tend to only speak Welsh at school could go and use it outside of school. They could be a focal point for the language in every community and could help native speakers keep their fluency and help learners to improve and reach fluency.

A similar idea to what’s been already suggested; increasing the “background level” of Welsh people come across. I often say “Bore da” when I come into the office (in Manchester) which occasionally kicks off a conversation about the Welsh language sometimes leading to “I can/want to speak Welsh”

Or writing Penblwydd Hapus or Llongerfachadau on cards or Facebook posts. Everyone can deduce the meaning but raises awareness.

“background level” of Welsh people come across. I often say “Bore da” when I come into the office

All of the feedback that I leave on Ebay and similar sites I do in Welsh. I hope that it all chips away somehow at the wall of english.

I think that’s a brilliant idea. The Senedd would need to make the designation/provision of this part of the local Council’s duties. They could then approach Community/Parish Councils, Marched y Wawr, Women’s Institutes etc… But it could not be compelled if the Village was totally monoglot English! Compulsion only leads to resentment. Our village had one family who were Welsh speaking and there was a family in Horton, now dead, I believe. Gower had been English since ‘acquired’ by the Norman King of England and ‘given’ to one of his followers. To most South and East Gower people, Welsh was as alien as Russian!

Not wanting to jump the gun, I just wanted to get something down before I forgot…
Screenshots/mockups showing a Strava-esk language app;

After having spoken with someone in Welsh, or having done a formal or SSiW lesson you would add that to your personal ‘interaction’ history; 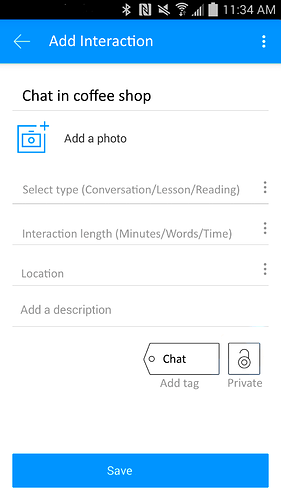 Your history would be available in different formats for you to view. You can use this to track your progress. You can also see the progress of people you have allowed to follow you. 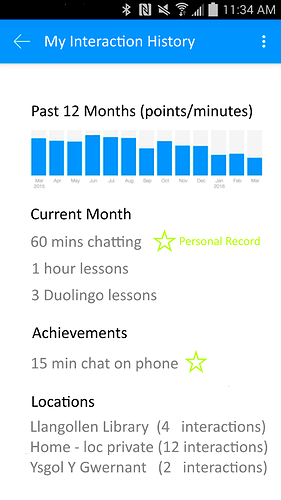 If you want to find somewhere to practise, you could look at data for an area; 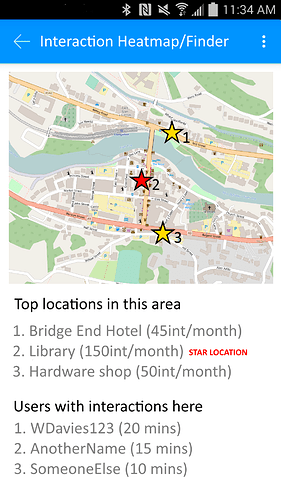 You can track your progress against followers, or people who have also interacted in the same location; 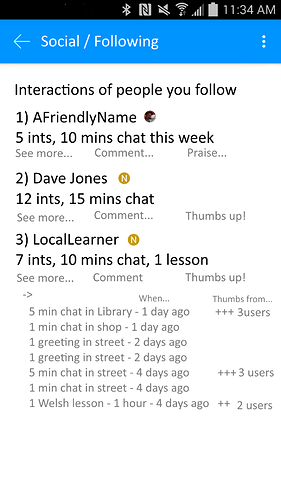 How Awesome does this look!

Would be great if you could connect your Duolingo or SSiW account to such an app and have it automatically pull in progress details.

I guess that this is already happening in a small way. Any lessons that are downloaded to a tablet and then listened to will show the date played (or started to be played).

How about each of us sets up our own progress thread here. A bit like the ones already here, but perhaps just one line per date. don’t know if it could be password protected, in case confidentiality was preferred. On the other hand, if it was to be private, anyone could just set up a word or excel document on their own computer or hand held device.

I’ve heard from the creators of Amikumu - an app that lets you find speakers of a target language - that Welsh will be available from August 16th! It started with Esperanto, but they are extremely ambitious and hope to make ALL languages available on it - even sign languages!

The idea is that when you would like to have a chat with a Welsh speaker, you can use the app to see if there is anyone nearby and get in touch to arrange a meeting place.

A couple of related ideas

@Deborah-SSi with the stickers “Ymarfer eich Cymraeg yma”, we could build an app (I say we, it would have to be someone else I have no clue where to start). On the app people could find all the places that have the stickers in their window. It could link to a map and enable them to visit cities like Caerdydd and use their Welsh.

What do people think?

Or it could be a part of the other app for finding Ymarfer partners. This could be an incentive for businesses to use it.