Someone gave me a copy of How Green Was My Valley, and I am wondering about it. I am an American, a little more than 1/16 Welsh, and I’ve only spent two weeks in Wales, so I am fairly ignorant. The book is beautifully written, but I kept feeling doubtful about it, whether it was romanticizing Welsh village life, so I looked it up. The Guardian says the author was born in London and barely visited Wales, although his parents were Welsh. The book is blamed for a lot of Welsh stereotypes that have stuck. Any thoughts about this?

I haven’t read it, and am an incomer to Wales so my tuppence worth isn’t even that. However I have a friend born in the valleys 60ish years ago who can’t bear to read it because for her it is painfully true.

Nobody likes the stereotypes and the film … well least said…
But I think that there was a lot of truth in it. Probably, the most harrowing and nasty bits are most true.

On the plus side, the scenery in the film was very impressive. I was fortunate enough to drive past the location every week during last summer and took a pic on my phone. 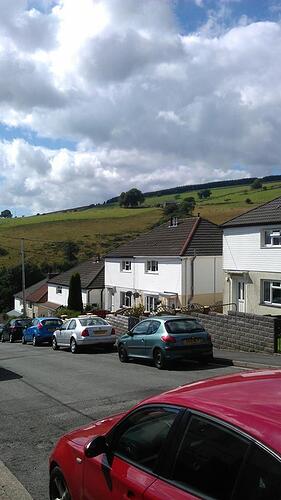 Nice photo. I was stunned by how gorgeous Wales was when I visited this summer. Anyway, thanks for the feedback. The book is pretty engaging. I was just curious what people thought about it.