Why Welsh? Why SSiW? What's your story?

And helo from Donosti, @Deborah-SSi
It’s possible you know Ifor, the chap I bumped into in my local pub, as he was on his way to Gasteiz to record a Welsh person living there, who was probably you! Byd bach yw e!

Wir yr! Yes, that was me! Ifor used my flat as a recording studio. He interviewed Begotxu from Zarautz and her son who is studying at university in Gasteiz as well as me. We had a great time! Do you know Begotxu? She speaks really good Welsh! Mainly we speak Euskara so I can improve, but sometimes Welsh

We’ll have to have a Welsh meetup in Donosti - you, me and Begotxu, and any other Welsh speaker we can find!

A meet up anywhere would be great, now that my Welsh has broadened slightly beyond talking about parsnips! Admittedly my Euskara has suffered, much to my partner’s chagrin. I was talking about studying for the EGA last year, then just dropped everything and immersed myself in Cymraeg

Ifor did mention Begotxu but I’ve not met her before. Apart from with Ifor, the only chance I’ve had to practise here is with a kid my son made friends with on a campsite!

Let’s definitely try for a meetup! There’s sure to be more dysgwrs here…

Ffantastig! I’m actually in Cymru at the moment, but I’ll be back on the 29th. I’ll find out when Begotxu would be available and get in touch with you again then. So exciting!

Fy nghariad and I were just talking about the “Welsh Scene” here in Donosti and she was friends with a bunch of Welsh people who lived here back in the 90s/00s.

Anyway one of those Welsh people is visiting next month with his family - and, playing up to the old trope that all Welsh people know each other, I suggested that people on here would know Big John from Bangor who lived in Donosti for years and now works in Caerdydd

Maybe we could have a meetup in Donosti next month then! That would be brilliant! I don’t think I know him, but I don’t know so many people from north Wales

I’m definitely up for that!
One of the dads in our clwb rygbi is from Wales, I’ll ask if he’s interested, though not sure if he speaks a word of Cymraeg!

Ah, I love that someone else calls their partner fy nghariad as well.

I doubted my treigliad skills - glad I got it right!

Good call! Thanks Deborah! And ongi etorri to any Euskaldunak who may stumble upon this corner of the forum!

Shwmae Pawb!
I can’t believe the timing of this thread…
I’m a Welsh speaker and Basque learner and will be in Donosti for a conference (translators and editors, with some talks on minority languages) and a bit of sight-seeing 12th-20th October. At the moment I’ve got a bit of spare time on Wednesday 12th (afternoon/evening) and Sunday 16th (afternoon), and possibly at some point on Tues/Weds (TBC) if anyone is around.
Karen

Quite the coincidence Karen! Would be nice to meet you.

I will definitely be around, although I work evenings during the week. That Sunday, my son’s got a rugby match at a TBC location, if it’s local I’ll be around in the afternoon.

Gwych!
I might actualy be free Sunday evening too (also TBC) and Weds 12th is a holiday apparently, so I’m not sure if that makes a difference. I’ll keep you posted.

Forgot completely about the holiday, usually it’s a “super puente” combined with another day to give a 5-day weekend! Alas not this year, but never look a gift horse in the mouth

In that case, we might be out of town on Wednesday, but only during the day. Let me know!

I’m in Vitoria-Gasteiz, which is only a bus/train ride away. I’m recuperating from a small operation at the moment, but if things go well, I may be able to join you. I was supposed to be going to Wales for two weeks to work, but the op has cancelled that - perhaps fortuitiously!

There is also this event coming up on the 13th in Aberystwyth, but Begotxu from Zarautz will be there doing simultaneous translation from Basque. She is also a Welsh speaker! It’s possible to listen in via Zoom by emailing them for the link. 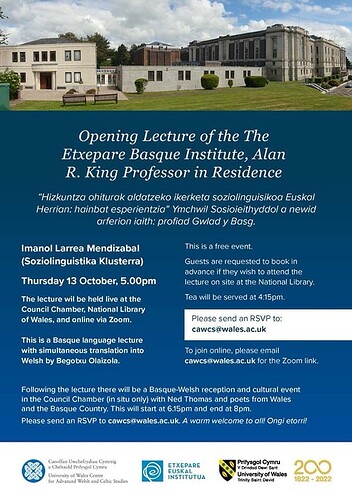 It looks like we were both typing at the same time

The 12th would be too soon for me, but if things go well, I could probably manage the Sunday afternoon. It would be great to meet up!

@Deborah-SSi @robert-john-summers
I’ll DM you both my mobile and perhaps we can keep in touch via WhatsApp or something.

Sunday should be fine for me depending on where the rugby match is in the morning. As youre both coming further I’ll just come to wherever you are! Dw i newydd weld dy DM @karenrutland felly bydda i’n rhoi fy rhif ffôn i ti hefyd

I’ve just sent you my mobile number, @karenrutland. WhatsApp is good for me

Once I have an idea of the time that would suit you, I’ll check bus and train times.