Manon Steffan Ros the successful Welsh novelist and friend of SSiW, is also a talented singer.

She has formed Blodau Gwylltion with Elwyn Williams who writes and performs with Steve Eaves and his band and they are releasing their debut album on the 16th of March this year.

(You may also know Manon as the daughter of Steve Eaves and sister of LLeuwen Steffan).

The album will be called Llifo Fel Oed and will be released by Recordiau Sain. Here’s a taster for you - it’s truly beautiful.

And this is Trac yr Wythnos on Radio Cymru this week!

What a truly multi-talented person! I’m reading a book by Manon at the moment and really enjoying it.

One of the few releases to make it onto Apton on the day of release. If this was at Manon’s insistence then she truly is even more of a national treasure than I first thought.

Here’s where they are promoting/launching their album tomorrow… 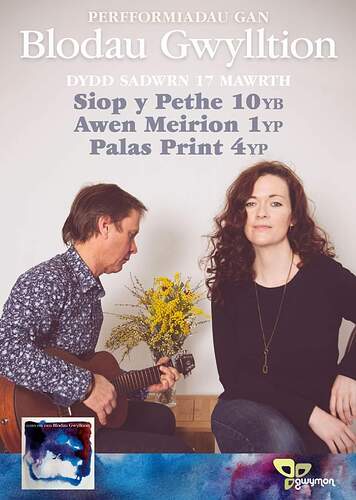