Another request for song lyrics

Wondered if anyone had the words to another great song I’ve come across on YouTube, ‘Dyffryn Clettwr Fach’, as sung by Julie Murphy.

I’ve made enquiries for you, let’s hope we can find something.

I’ve received this in response… 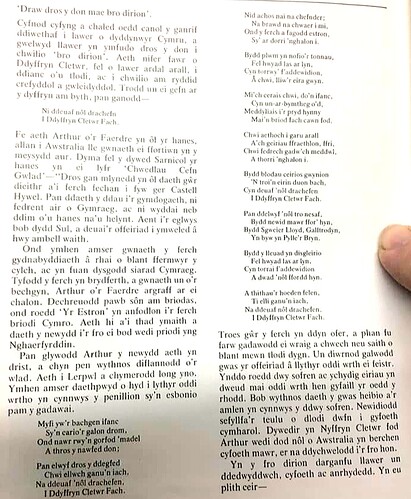 Thank you so much for this. I’m afraid I’ve a way to go with Welsh before I can just write down what I hear, yet with the text in front of me it all becomes quite clear, so this is invaluable to me. I note that the first two verses of the song also occur in another fine song, ‘Ffarwel I Aberystwyth’, and indeed Welsh folksong in general seems to spend a lot of its time saying goodbye to places!

Yeah, I know the feeling. If I could figure out the written lyrics just by listening, that would be great. Even if I listen closely, it seems like a wall of sound I can’t make out much of. I’ll catch the occasional word or phrase, not much more. Then I see the lyrics, and it becomes crystal clear.

If I could figure out the written lyrics just by listening, that would be great.

Well, the lyrics to ‘Hollaback Girl’ by Gwen Stefani are “'Cause there ain’t no halibut, girl”. Poor woman, she wanted so badly to have fish for lunch.
And ‘We Are Family’ by Sister Sledge is “We are Emily, I’ve got all my sisters and me”. As a small child, I imagined Siamese triplets named Emily.

Since I’ve started listening to Welsh songs, I’ve been wondering what’s all that fuss about songs not being understandable by people outside of Wales. - Most people of the world don’t know what songs in English really say. Even first language people sing along all kind of weird things and still have fun!

I was convinced Michael Jackson was singing about a “Motown rabbit” and a “mechanical man” in one of his songs, and my daughter still remembers my lyrics and laughs about it.