I heard something interesting yesterday that I think is very important for learners of anything, but especially language learners, to remember.

You know when people want to build big muscles? They go to the gym, and lift weights. but they have to do something very specific in order to build muscle (rather than just become fit / toned etc), and that is, they “train to failure”; they lift large weights over and over again until they fail to lift it. It is the failure that actually builds the muscle bulk.

Learning a language is very much the same thing. You can learn about the language with no pressure of failure, but if you want to learn to really use it, you have to get used to failing. That may be a failure to find the eexact word you want, maybe a total failure to understand anything at all, or in trhe early days, a failure to turn the desire to speak into actually speaking. These “failures” are what push your boundaries and make you grow into the speaker that you want to become.

In other words, congratulations - you’ve just hit your first real roadblock, which means you must be moving forward. You have now identified a way of overcoming the block, and you will achieve your goal of speaking to someone in Welsh, even if it’s “only” for 10 seconds. You will meet more roadbloicks as you move on, and if you treat them all like this one, you will be speaking Welsh with people far more quickly than you could ever imagine.

Good luck! And remember, even the longest journeys start with the first step!

I understand you. I posted a few thoughts about the business about a month ago; they’re scattered amongst the various threads here. Briefly:

People laughing when mistakes happen - it’s very rarer they are laughing “at you”, it’s more it’s amusing. On Saturday night I was having a few drinks and tried to say “it’s interesting, I know I’ve drunk a few but I don’t feel drunk”, what I did say wasn’t that. Safe to say that brought on some laughs.

It’s really, really, really important to have a sense of humour when learning a language!! We invest so much of ourselves in the process that learners (I have done this) often take things personally when they are corrected. The people correcting you are trying to help. It’s rare they mean it personally (when I say rare I’d hazard a guess at less than 5% of the time). Please don’t let the frustrations of learning a language get to you. It’s better to roll with them if you can. I say this from someone who has had a few rants about how blinking hard learning Welsh can be because I’ve let my frustrations get to me.

Us Welsh learners find it hard i think because it means so much to us.

However if we find good friends who can help us that makes it easier and we can laugh too. I hope @margaretnock smiles when she sees a sign for a museum or crematorium knowing i confused the words. It makes me smile.

Drove past signs for the Amgueddfa DLG on our way home on Saturday.

I have a FB friend in Japan for her third year teaching English. She just posted the fact that she told her students that she slips into Welsh when surprised or angry. They were very curious and demanded to hear a Welsh Rant, which she gave them. As I just said to her “Gotta take the chance to talk Welsh whenever it comes up”

Good morning,I have not read all the comments above, but I understand the problems and reluctance some times to try and become included in a Welsh conversation. The main problem for me was a lack of vocabulary. It was not easy to keep a conversation ticking over if you can only talk about a dog or a cat, so the first thing I tried to do was extend my vocabulary by learning 3/5 new words every day. If you analyse your English conversation throughout the day, then I would suggest that for normal domestic conversation we do not use more than possibly 500 different words, so if you can learn 500 words in Welsh, the rest is easy.I am not sure whether this is helpful, but it certainly makes sense to me.

Grab one of those vocabulary books where words are divided up by subject matter… shopping, travel, sport etc etc. Amazing how quickly it’ll boost your speaking skills.

I’ve got this one 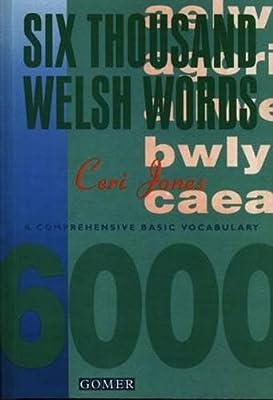 I think there are differences between all of us in how we like to learn. I’m hopeless with lists and tables and find it hard to remember a word i have read at all. I find that I have to hear the word spoken and in context first and then check my best guess before it sinks in. My guesses can be way off at times, but the process seems to work for me these days. Sometimes when i hear it i can’t fathom how its spelt and then when i do see it, maybe a month or two later the penny drops. It does feel like a long slog sometimes, but I can now feel the uaeful vocabulary starting to build some momentum.

I try to learn the words for a particular topic and then run them through my head when I’m out and about and see the things I’ve learn the words for. For example, it’s quite easy to learn the words under the ‘transport’ section and then start saying them to yourself as soon as you’re out of the door and start seeing different types of road, signs, traffic lights etc etc.
Food is also quite an easy one as you can practice by doing things like writing your shopping lists in Welsh.

When I was a kid, I was a voracious reader…well, not just then, actually, but as a kid my vocabulary was obviously growing faster. I met words on the page. The context made the meaning clear, but unfortunately the pronunciation was not so clear.
It took ages to realise that ‘once’ was pronounced ‘wonse’ and even now, I sometimes have to remind myself it doesn’t start with ‘w’. Mishap was another - I said the ‘sh’ as in ‘sheep’ for ages before someone heard me, laughed and told me how to say it! I think there was a horse in Black Beauty whose name I said wrong, but I’ve forgotten it now! @aran’s method make sure we can be understood, even if we can’t spell and Cymraeg is a lot more phonetic than English!

I wrote bis-bersa once in English and the teacher covered it in red ink - I heard vice-vera on TV I think and thought i’d be clever using it.

This morning I tried to look up a word I heard on the radio and this one throws up a problem I have with the Welsh phonetics sometimes. If I spell this as I heard it with some English and the odd Welsh dd, then I hope it will make sense.

I heard G - why - th-gar-edd-ee. The “I” sound as in why, made me first choose gwaithgareddu. Nothing. So I looked up gwaethgareddu. Again nothing. So then I tried gwauthgareddu and again I was wrong. Finally I went for gweithgareddu and that was the one (activities or proceedings).

Welsh is clearly lot more phonetic than English, but the ai,au,ae and ei pronounciations have quite profound regional variations I think. I suppose “oe”, also varies from Oy to Oh, depending on where you go and the “i” in"io" can dissapear altogether in many areas.

My son saw the word “steak” (as in a piece of meat) long before he heard it and to this day it sometimes comes out as rhyming with beak, leek, freak.

Oh Margaret, I had forgotten that one!! It got me laughed at too!! Teachers were not careful of children’s feelings in those days!! (And I was a very naughty, nuisance of a brat, who, no doubt deserved as many put-downs as possible!) mm… not changed much, really!

…plus “filling in” phrases, which don’t mean much really, but prove that you are still awake and listening, and still in Welsh mode.

I wrote bis-bersa once in English and the teacher covered it in red ink - I heard vice-vera on TV I think and thought i’d be clever using it.

Reminds me of when I tried to use “khaki” in writing at primary school, and I spelt it the way it sounded. I was lucky to have a lovely patient temporary teacher who kindly explained how it was really spelt, and left me with a good feeling, rather than a horrible one.

The only thing was that I was about fourteen when I did it.

I was in Caernarfon a few months ago and was hoping to use what little Welsh I have but chickened out. And when someone actually spoke to me in Welsh my mind went blank. I just smiled like an idiot! I was so annoyed with myself. I will be attending an event in Cardiff soon where there will be Welsh spoken and hoping this time I will get courage up to try speaking Welsh.